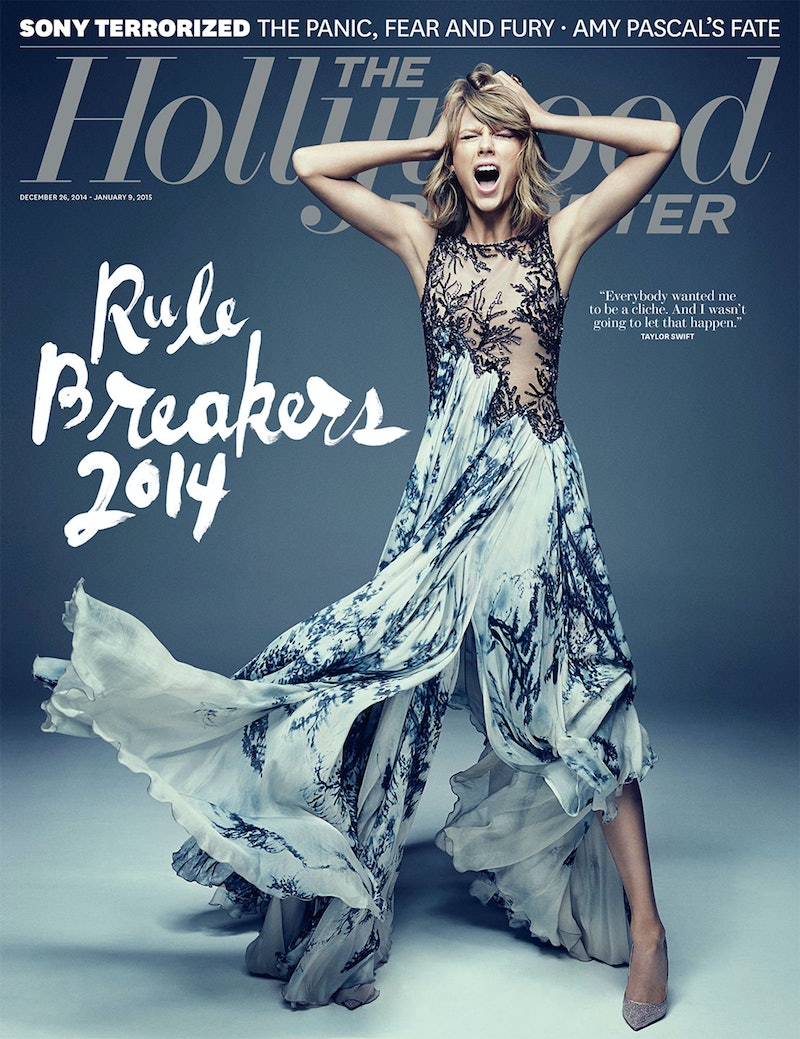 When it comes to telling off haters and getting her own way, no one does it better than Taylor Swift. In the Hollywood Reporter 's 2014 Rule Breakers issue, Swift revealed how she battled the skeptics of her country-to-pop transition — and she's not talking about her fans. As she fought to make 1989, everything from the title of the album to the cover art (which only featured half of her face) was picked apart, but she emerged at the top. Haters gonna hate, but Swift always wins. Part of her strategy is to let every decision be her own, not some random higher-up at her label. When asked what advice she would give to a woman wanting to break into the music industry, she had a fantastic little speech that I hope everyone will listen to:

"If I were to give advice to a girl or a woman wanting to get into the music industry, I think the first thing I would tell them is that you're going to have thousands of decisions to make on a daily basis that will end up depicting your image, your sound, all of the things that will shape the public's perception of you as an artist. Let those decisions be your decisions. Don't let them be some man in a suit's decisions or some A&R guy wearing a beanie. Whether it's what you decide to wear, how you feel confident on stage, what you want your persona to be, what you want to stand for, what you want to stand up for. And most of all, creatively, I think you should steer the ship."

Swift also touched on the outpour of support she received from fellow artists after dropping her music from Spotify streaming before moving on to a more fun topic: her theme song. "If I were going out in a boxing rink to fight or something, it would be 'Backseat Freestyle' by Kendrick Lamar," she revealed, which is no surprise after she rapped it on Instagram. "I know every single word to that song and I really wish that I was best friends with Kendrick Lamar. And I'm not. And it makes me sad daily." He already complimented her once, so maybe best friendship is in their future.

More like this
Taylor Swift Fans Sue Ticketmaster For The Eras Tour “Ticket Sale Disaster”
By Jake Viswanath
Yes, That's Lindsay Lohan's Sister Singing In The 'Falling For Christmas' Movie
By Radhika Menon
Dolly Parton Joins TikTok & Debuts A Song About Baking
By Jake Viswanath
Spotify Wrapped 2022: The Best Celebrity Reactions To Their Streaming Stats
By Radhika Menon
Get Even More From Bustle — Sign Up For The Newsletter