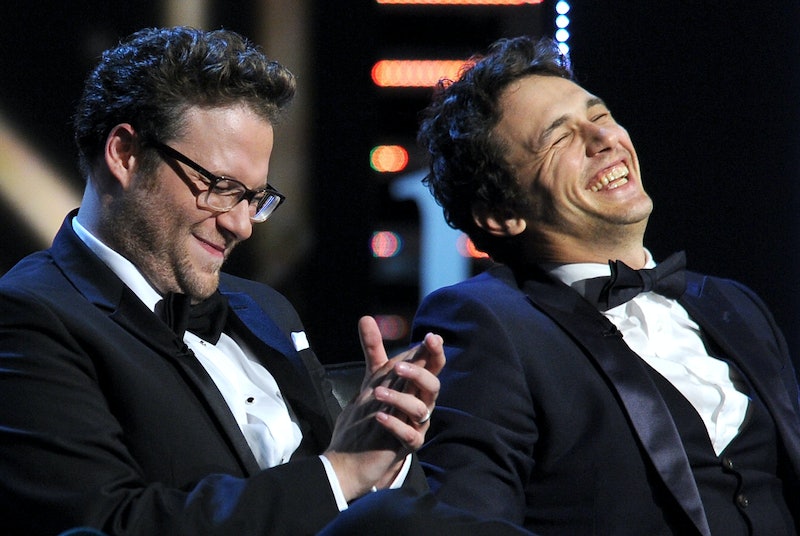 UPDATE: Deadline has reported that Sony will not release The Interview in any capacity. “Sony Pictures has no further release plans for the film,” a studio spokesperson told the outlet. In what could be deemed a crippling defeat for Sony, the production company has decided to pull the theatrical release of The Interview, James Franco and Seth Rogen's North Korea-based comedy entirely. That's right, audiences who were looking forward to seeing the actors' latest collaboration will have to wait, or perhaps, not see it at all. The cancelation comes after a series of threats by the hacker group the Guardians of Peace, who have threatened both the company itself and moviegoers who would have braved seeing the film in theatres. Sony said in a statement:

In light of the decision by the majority of our exhibitors not to show the film The Interview, we have decided not to move forward with the planned December 25 theatrical release. We respect and understand our partners’ decision and, of course, completely share their paramount interest in the safety of employees and theater-goers.

The statement went on to conclude: "We stand by our filmmakers and their right to free expression and are extremely disappointed by this outcome."

And it goes without saying, so are we. So, will audiences ever get to see the film? Will it receive the talked-about VOD release instead? Will it earn another release date? Bustle reached out to Sony for comment about a possible future release, but has yet to here back.

As of now, nothing is certain, except for the sad fact that the film's upcoming December 25 release date is no longer current, but here are some possibilities of what could happen with the film.

Netflix Could Pick It Up

This is probably a good alternative for the film. While Netflix is notoriously tight-lipped about the actual statistics and numbers surrounding how many people utilize their service and watch their original series, we have a feeling it's tangibly lucrative. Sony could sell The Interview to Netflix in the hopes of reaching a wide — though unknown — large audience.

Alternatively, Hulu could Buy It

This seems like a lesser possibility, considering Netflix would probably offer the bigger payday, and Hulu is usually synonymous with television over film.

Sony Could Release the Film at a Later Date

When the drama and fear surrounding the threats are tempered, the production company may choose to release the film in theatres afterall. This also seems like a long shot, considering the hacker's threats have no real expiration date, and Sony seems set on keeping everything as peaceful as possible.

Sony Could Release the Film on VOD

In what I would consider the best option for the film, Sony could release The Interview on VOD and skip a theatre release entirely, opting to still make money and allow audiences to see the film in the safety of their home.

The Film Could Never See the Light of Day

Though this would be admitting total defeat, and crushing the hard work and efforts of hundreds of people who worked on the film. So please, Sony, let's set this stupid idea aflame immediately.