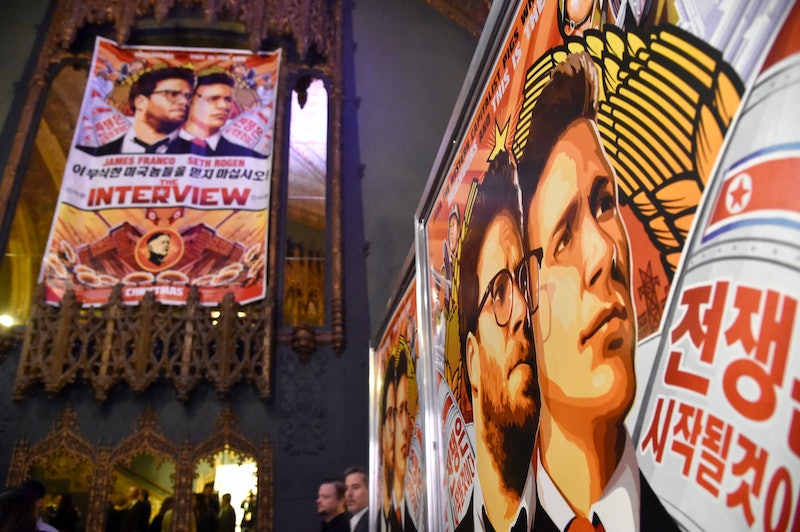 Just hours after Sony Pictures Entertainment canceled the upcoming release of The Interview, federal investigators determined North Korea orchestrated the Sony hack, which severely compromised the company's internal servers in November. Unnamed federal intelligence officials speaking with The New York Times on Wednesday said the North Korean government was "centrally involved" with the cyber security attack, which leaked the personal information of Sony employees and revealed thousands of private emails between Sony Pictures chairwoman Amy Pascal and various Hollywood players — including insider information on the on-going drama regarding The Interview. The White House has yet to publicly announce North Korea's involvement, and it's unclear how the federal government will go about responding to the massive security breach.

Federal officials speaking on the condition of anonymity with The New York Times and NBC News believe the hack was conducted outside of North Korea — much like other recent hacks by North Korea on other nations — but carried out by the North Korean government. The hack may have been routed through international servers in various countries across the globe, including Bolivia and Singapore. U.S. officials won't elaborate on the evidence they found incriminating North Korea, with one federal official telling NBC News only that the government has "found linkage to the North Korean government."

On Wednesday afternoon, Sony announced it was pulling The Interview, following mounting pressure from both the hackers, who call themselves "Guardians of Peace," and prominent U.S. movie-theater chains. The controversial comedy's theater dreams began to crumble earlier on Wednesday, when AMC Entertainment, Cinemark and Regal Entertainment declared they wouldn't be showing the film, which is crafted around the assassination of North Korean dictator Kim Jong-un. Carmike Cinemas and Canadian-based company Cineplex also pulled their support from The Interview.

In a statement released Wednesday, Sony executives said they respected their partners' decision, and expressed concern for the safety of the movie theaters and their employees. The statement continued:

Sony Pictures has been the victim of an unprecedented criminal assault against our employees, our customers, and our business. Those who attacked us stole our intellectual property, private emails, and sensitive and proprietary material, and sought to destroy our spirit and our morale – all apparently to thwart the release of a movie they did not like. We are deeply saddened at this brazen effort to suppress the distribution of a movie, and in the process do damage to our company, our employees, and the American public. We stand by our filmmakers and their right to free expression and are extremely disappointed by this outcome.

The five movie-theater chains decided to cancel their screenings of The Interview, which was slated for a Christmas Day release, because of new threats from the Guardians of Peace. On Monday, the hackers released an ominous message, promising widespread violence if movie theaters displayed The Interview as planned. According to Variety, the hackers released the following message directed at U.S. movie theaters:

The world will be full of fear. Remember the 11th of September 2001. We recommend you to keep yourself distant from the places at that time. (If your house is nearby, you’d better leave.) Whatever comes in the coming days is called by the greed of Sony Pictures Entertainment.

North Korean officials have previously denied its involvement with the ongoing Sony hack.