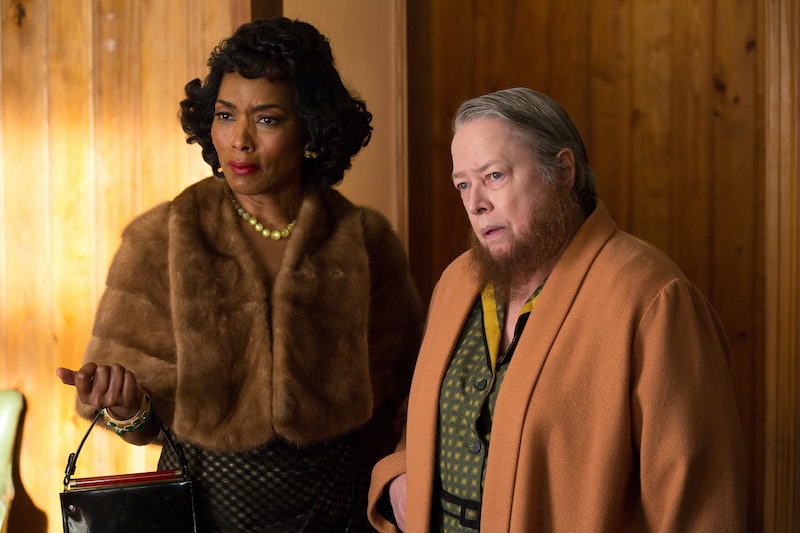 Angela Bassett was a force to be reckoned with in the episode "Orphans" on American Horror Story: Freak Show. And now that Desiree knows about Stanley's evil secret, what is Desiree going to do now? As I had hoped, Desiree and Maggie have paired up to stop the deaths of the people at the freak show (finally, Maggie!). And Desiree seems like one of the best people to have on your side to stop Stanley killing her friends and selling their bodies.

Desiree is a strong, passionate woman who is not afraid to speak her mind. Besides her sometimes transgressions of sleeping with other people while married to Dell, she has been one of the more moral characters on AHS this season. (And, although no two wrongs make and right and all that stuff, Dell was cheating on her too.) Compared to people like Elsa, Stanley, and Dell — Desiree is a saint. But that doesn't mean she isn't willing to get her hands dirty. Although she is relatively new to the Elsa's freak show, she appears to be fiercely loyal and had the exact right amount of outrage when Maggie revealed that Stanley and her are con artists. After all, remember that whole revenge plot involving Penny's dad?

Plus, Desiree is smart. She knew Maggie wasn't telling her the whole truth and realized there must be a connection between Stanley and Maggie and all the murders. I'm just so happy that Maggie finally decided to out Stanley for the horrible, killing, greedy monster he is. So, what's the plan now that she knows? Desiree is smart, but Stanley is a master manipulator. It would be in her best interest to play it cool until she gets the upper hand — otherwise Stanley may try to get her body on display in the morbidity museum alongside Ma Petite, Salty, and (maybe?) Jimmy's hands.

What would be the most epic and deserving fate for Stanley though has to involve his large member that he likes showing off. That's right, Stanley's 13-inch penis (his most prized possession) has been such a plot point, that it would make sense if something bad happened to it. And just imagine if Desiree cut it off (a la Lorena Bobbitt). She already had threatened Penny's dad with such a fate in "Blood Bath" (until Maggie stopped the women's revenge). Could it have been foreshadowing?? (Oh, please Ryan Murphy, let it be true!) Although I don't normally condone people cutting off other people's body parts, if anyone has had it coming, it's Stanley. Oh, the delicious irony since he's been busy cutting up other people's bodies for profit.

I have full faith that Desiree wouldn't mind dusting off the old knife again and actually going through with it to destroy Stanley. Let's just hope he doesn't figure out her plan first.