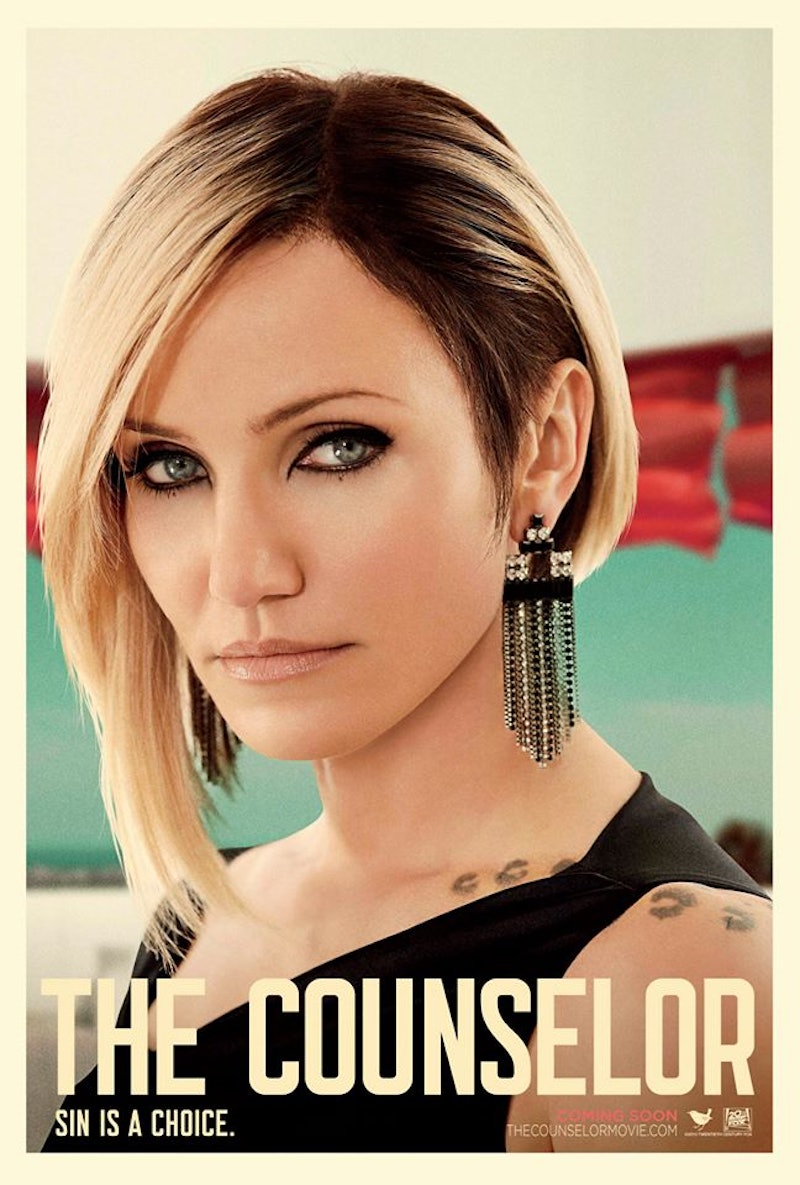 Women 21 or older, get ready to rock veils, hoods and scarves for the rest of your lives because 'The Counselor' posters have been released and if Cameron Diaz and Penelope Cruz need to be Photoshopped, clearly so do you. In the long and drawn out battle that's been fought against airbrushing and sample sizes and everything in the entertainment industry that tells us we aren't good enough, the release of promotional posters in which two of the most genetically gifted women in Hollywood have been reduced to wrinkle-less Barbie dolls is not a good sign for those fighting the good fight.

It seems sometimes, that no matter how much railing, feminist ranting or level-headed explanation we throw at those behind the screens and decisions in Hollywood, there's no end in sight to this ageist phenomenon that throws beautiful, realistic women under the bus to sell more magazines or movies.

However, should we just throw down the gauntlet and give up? Or is there cause for a smile — laugh lines be damned — because someday, older women will be seen as sexy too?

Clearly, what must be addressed first is the vast disparity between how the women and men are treated in The Counselor posters, specifically. Penelope Cruz, 39, and Cameron Diaz, 41, look like Madame Tussaud's version of themselves, yet their male counterparts are still allowed wrinkles. Hell, Javier Bardem is even allowed that atrocious hair-do. Why are older men distinguished and sexy whilst women of the same age are considered either past their expiration date or in need of reworking? This is far from the first time this same question has been asked, yet it's frustrating that we need to ask it over and over again in the hopes that someone will listen. Is anyone listening?

The answer seems to be a hazy maybe. Wrinkles have been making appearances on movie posters, and refreshingly in the pages of magazines, but never when the actress is question is playing a sexualized role. An attempt to find evidence to the contrary yielded a big fat bunch of nothing, but I'm not convinced we should give up hope quite yet. Celebrities like Kate Winslet and Kim Kardashian have spoken out against Photoshopping, and the media backlash against the hack job done on Melissa McCarthy in the movie poster for The Heat was quick and decisive.

It's not news that feminists don't particularly like seeing women made into unrealistic doll-versions of their already-beautiful selves, and finally, that kind of anti-Photoshop approach is quickly taking root in the public consciousness. Perhaps, for now, perfection sells and youth sells, but how long is it before Hollywood notices what we've known all along, that middle-aged and older women are beautiful too, and they deserve a spot in the public eye? I don't think too long.

Penelope Cruz is egregiously good looking with her laugh lines and slightly wrinkled eyes, and we're reaching a point where we know that those things are okay. Skinny and young has been in for a long time, but fake and disingenuous never was, so there's hope that in the future, advertising will adjust to meet our needs, not our insecurities.

Until then, stay away from the posters for The Counselor, they don't depict real women, and they're more of a step back than a step forward.

More like this
Amanda Gorman Shared A Powerful Message On Meghan Markle’s Penultimate Podcast
By Darshita Goyal
You Definitely Know The Voice Of Shuri's AI In 'Black Panther: Wakanda Forever'
By Brad Witter
Jodie Turner-Smith & Joshua Jackson's Relationship Timeline Includes Her Proposing
By Jake Viswanath
J.Lo Wants To Make A Sequel To This Movie With Ben Affleck
By Jake Viswanath
Get Even More From Bustle — Sign Up For The Newsletter