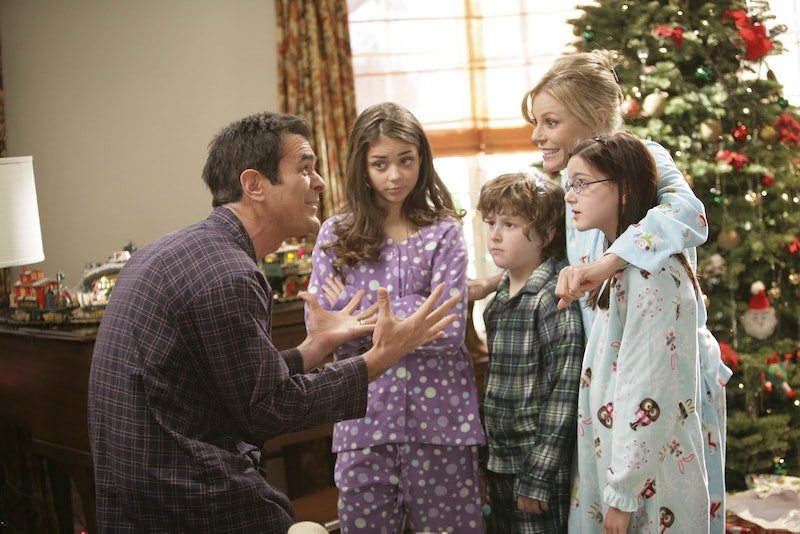 Like a lot of 20-somethings, I will be spending this Christmas Eve at my parents' house. For me, this is relatively unsurprising since I live here (shout out to awesome parents who let you move back into your aggressively pink childhood bedroom after graduation). But there is another phenomenon that sends you back to your parents house. It is what I call the Awkward Adulthood Transition Phase. You have your own life and family of friends beyond your actual family, but for most of us, our anchor is still with our parents long after childhood as ended. Some of us will end up back at our parents regardless of our "adulthood" circumstances (I have a feeling I will always be stalking mine during the holidays. Who else will eat an entire tin of Peppermint Bark with me and not judge?), but in the Awkward Adulthood Transition Phase, the 'rents are your default home for Christmas.

You will find, though, that crazy holiday traffic is not the only new thing you have to deal with when you're a grown-up kid at home for Christmas. Since I've been doing it for a few years now, I can give you the skinny on everything that changes (due to my rampant holiday candy consumption, I won't be able to give the skinny on much else):

I honestly have no idea how my parents handled four small children under the age of six cracked out on sugar during the Christmas Eves of yesteryear. I was, by far, the worst. "Go to bed so Santa can come," they'd tell us, but since I shared a room with my siblings, I would secretly force them to stay awake to see if Santa would fly by the window until they were pretty much all crying and begging me to shut up. You know what's scary? I wanted it to be real so much that I straight up hallucinated and/or dreamed that I saw Santa every single year. In fact, I'm not even being cheeky here when I say I'm either genuinely insane or he must actually exist. (Sorry that I just wrote the beginning to my own ABC Family Christmas special).

Christmas Eve as an adult: "SANTA'S COMING ... oh, and you're wrapping all the presents."

When I became a "grown-up" (aka, learned the dark cold truth about Santa), I was recruited into what I dubbed the Elf Squad, which is comprised of me and my mother. We sit on our butts, locked in the bathroom, and wrap everyone's presents. I have actually come to look forward to this more than anything. We are a pair of gift-wrapping badasses.

Whoever had the biggest hot chocolate mustache is the obvious victor of Christmas. Followed up by whomever could shove the most marshmallows into their cup.

Shout out to older siblings who paved the way on this one. In case you need your own recipes for this year, there's a Kahlua one in here that already lit my fire.

Christmas Eve as a kid: Anxiety/crippling desire to wake up everyone in the house and run downstairs

It was almost too stressful to be a child during Christmas Eve. You woke up every five minutes CONVINCED that the sun has risen, only to wake into disappointing darkness. One of my first experience with an alarm clock was when my parents told us not to wake them up until the alarm went off at 7AM. (Spoiler: We didn't make it.)

Christmas Eve as an adult: Sleeping in forever

Now my parents are the ones knocking to make sure we're all alive when we don't descend to the living room by noon.

Christmas Eve as a kid: Putting out cookies for Santa

I lived for the elaborate ritual of arranging the cookies just so on the plate and putting them somewhere up high enough so that the dog wouldn't jump up and eat them, but low enough that Santa wouldn't miss them (which was of the utmost importance; The idea of Santa rejecting our cookies was the emotional equivalent of getting rejected from colleges in my teen years).

Christmas Eve as a kid: Santa can get his own damn cookies

Christmas Eve as a kid: You send up one last prayer to Santa that you're getting that one thing you so desperately want

One year for me it was a Dragon Ball Z action figure of Gohan. (Yes, he brought it. Santa was such a bro.)

Christmas Eve as an adult: You send up one last prayer that you didn't totally screw up the gifts you got for your family this year

My littlest sister is great, but she always out-Christmases the frick out of everyone. She's like the Christmas Gift Whisperer. I'm not saying that gift-giving is a competition, I'm just saying that if she wins again this year, I WILL NEVER FORGIVE MYSELF.

My whole family saw this together Christmas Eve in theaters the year it came out, and we dared my brother (who laughs loudly and often) not to laugh for the whole movie. He made it to that scene where the raccoon attacks, and then proceeded to burst so intensely that he spat all over three rows in front of us in what is now one of my most glorious Christmas memories to date.

Some things will never change.

More like this
22 Movies On Netflix That Are Perfect For The Whole Family
By Bustle Editors
The Best Time To Date After A Breakup, According To Experts
By Bustle Editors
12 Ways You're Sabotaging Your Love Life
By Teresa Newsome and Lexi Inks
20 Things You Should Never Tolerate In A Relationship
By Rachel Sanoff and Kathleen Ferraro
Get Even More From Bustle — Sign Up For The Newsletter