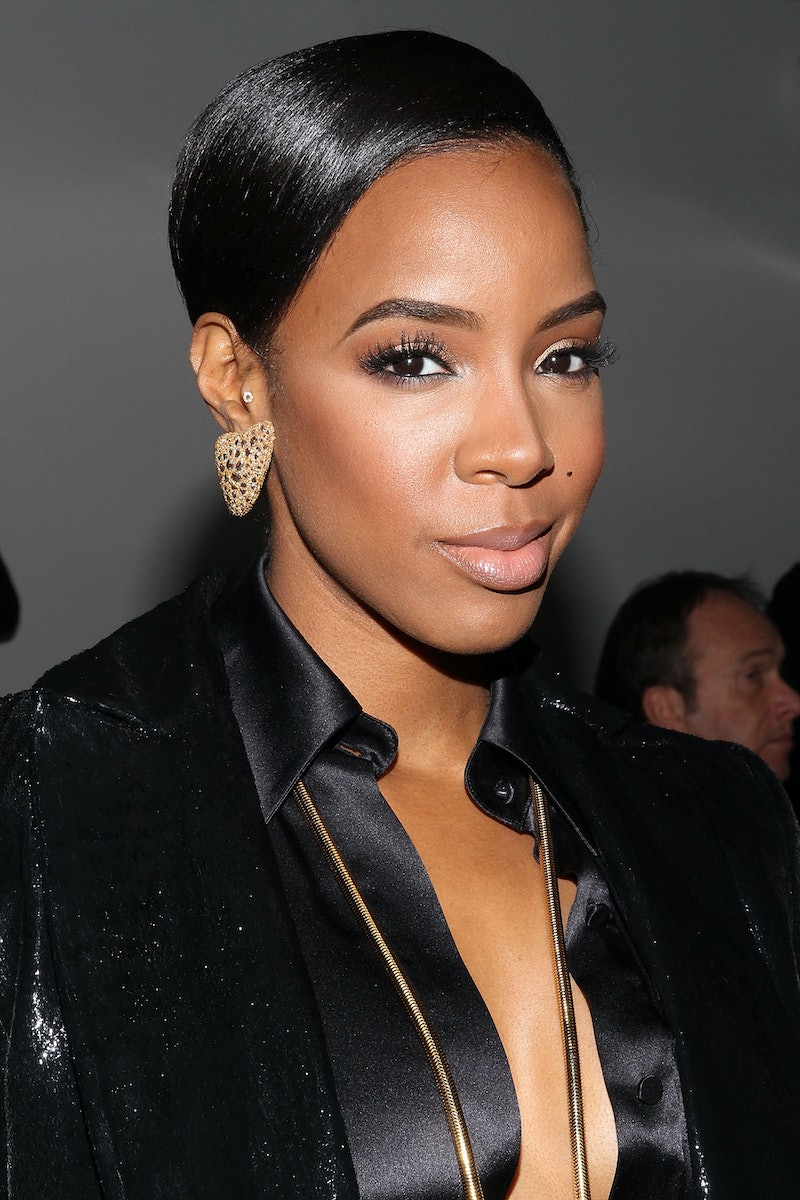 A little more than three months before her due date, an expectant Kelly Rowland accidentally revealed her baby's gender in a hilarious, potty-mouthed slip-up that took place during an interview with FOX411. But ever since the 33-year-old and her husband Tim Witherspoon welcomed their adorable baby boy Titan Jewell, it looks like she's managed to keep a tight lip when it comes to sharing too many details about her 6-week-old son. That's more than likely due to her protective mama bear instinct kicking in, which is totally reasonable, especially since she's a first-time mother. So the fact that Rowland shared a photo of herself with Titan that only reveals the back of his tiny, curly-haired head doesn't bother me in the least bit. The photo shows just enough of her little one to make me lean in and coo to my computer screen.

Rowland captioned the pic of Titan resting comfortably in his mother's arms, "#chillinwiththelilbigguy." How cute is that? Obviously the photo is super adorable (although it may not make you all weepy like Solange's sappy yet sweet congratulatory message), and will bring a smile to anyone's face. But I'm really glad to see Rowland share such a happy, tender moment, especially since her mother Doris Rowland Garrison's unexpected passing only a month after the arrival of her grandson.

Despite having to cope with two major life changes in such a short period of time, one can only hope that Rowland's son is helping her through her grieving process. It's a good sign that she feels up to sharing personal moments on social media at such a time. While she surely has a lot of great things to look forward to in the new year, I'm happy to see her focusing on the present, which seems to be filled with nothing but love.Check out Kelly and Titan's cute photo below:

More like this
Will Beyoncé Be At The BET Awards To Perform “Break My Soul” Or Attend The Show?
By Jake Viswanath
Britney Spears’ Honeymoon Plans Include Watching This Movie With Her Husband
By Grace Wehniainen
You Might Want To Rewatch 'Elvis' For This Britney Spears Easter Egg
By Grace Wehniainen
Beyoncé Delivers “Soaring Vocals” On New Album “Renaissance”
By El Hunt and Radhika Menon
Get Even More From Bustle — Sign Up For The Newsletter