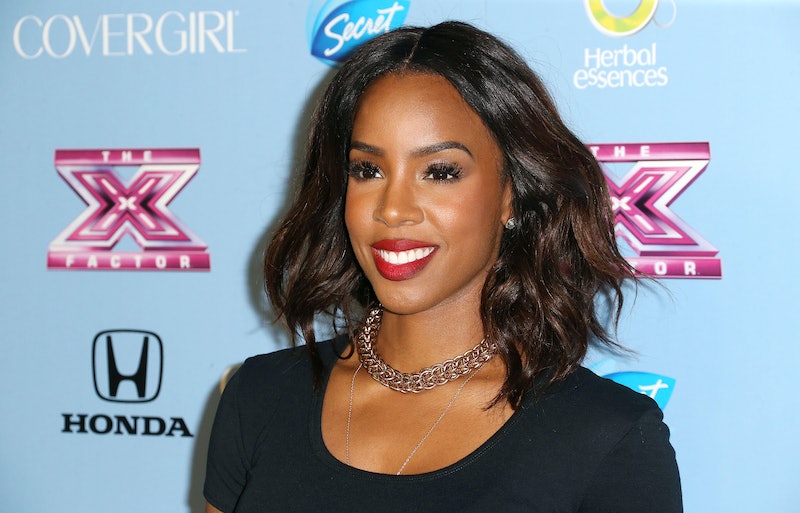 As you know, another one of Destiny's Children is on their way, and we now have an important update on the baby that will be following in Blue Ivy's tiny little footsteps. Kelly Rowland is having a baby boy! That's right, not all of Destiny's offspring are female. Destiny doesn't care if you're male or female, as long as you appreciate "Bootylicious" and coordinating outfits designed by Tina Knowles. Also, you have to be willing to give Beyoncé the most time in the spotlight. Those are the rules, and Destiny doesn't negotiate.

Rowland revealed the exciting news in an interview with FOX411 on accident. The singer began speaking about buying clothes for her baby and started using some telling pronouns by mistake. She said, "We’re very excited So far, everything has been good. I just feel like the baby is already rotten — like literally, my Caress family has gotten him all of his little bathing stuff, his toys — it’s just so cool." Realizing she let the gender slip when she was simply trying to promote her partnership with Caress beauty products, Rowland continued, "It, it’s… aw, fuck it! It’s a boy. It’s a boy!" Rowland is then said to have turned to her PR person and asked that they call her husband to let him know she "spilled the beans."

Rowland's reveal of her baby's gender wasn't quite as smooth as her pregnancy reveal, which was understated in a way that said, "I want to let everyone know I'm having a baby, but I don't want to have an US Weekly cover, ya know?" Rowland simply posted a photo on Instagram of a large pair of Jordans and a teeny tiny pair of Jordans with the caption, "I’ll be stuntin like my daddy….." The next thing you know, she's posting pics of herself doing yoga in a sports bra with her pregnant belly in full sight. Now that's a well done pregnancy announcement!

As for the way the baby's gender was announced, it was still great. Obviously, it's a much different way to go about it than the subtle little-and-big-shoes-on-Instagram method, but the way she was all, "Fuck it! Yeah, it's a boy!" is pretty awesome. And it sounds like she's very excited to welcome him. In the interview, Rowland went on to look down at her stomach and say "I’m sorry, baby. But yes, it’s very exciting.”

More like this
Beyoncé & Madonna’s “Break My Soul” Remix Honors A Group Of Black Icons
By Stephanie Topacio Long
Jennifer Coolidge Needs 'Legally Blonde 3' To Happen So She Stops Getting Hot Dog Jokes
By Jake Viswanath
Amanda Matta Isn't Afraid To Spill Royal Family Tea On TikTok
By Hayley Schueneman
We’ve All Had Bad Sex. Nona Willis Aronowitz Is Talking About It.
By Sophia Benoit
Get Even More From Bustle — Sign Up For The Newsletter