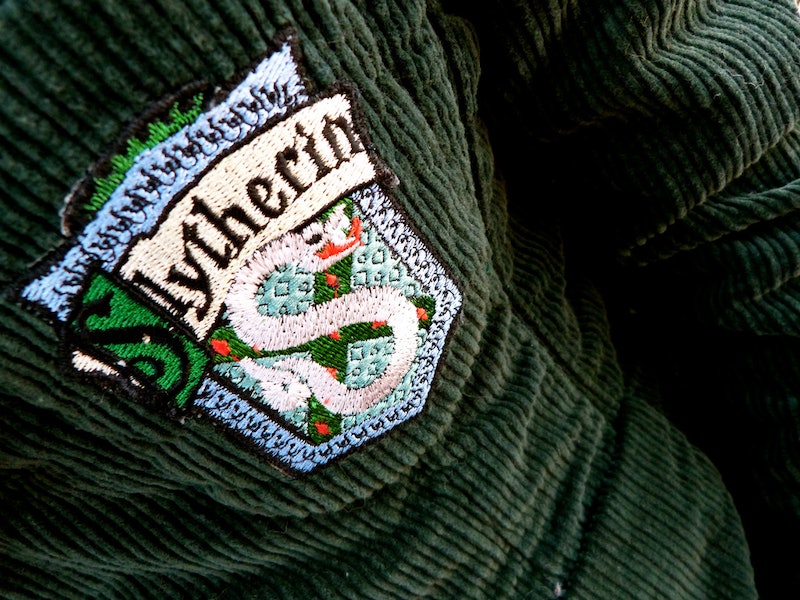 I'll warn you all up front: No, there are no new objects to collect and no there is no new writing on Pottermore Christmas day 8. (I know, all the sighs.) However, there is one seriously cool moment from the books that wasn't represented in the movie. There may not be a lot to do in the Pottermore moment, but it's an eerie one to relive nevertheless.

But first, the riddle:

In the Pensieve Harry sees a gold and emerald locketWhich a young Tom Riddle sincerely wishes to pocket,But which serpentine member of the Hogwarts founders fourDid the ornate necklace belong to in days of yore?

Hufflepuff! (J.K., of course.) This riddle seems ridiculously easy with the addition of the word "serpentine," because there's really only one founding member of Hogwarts that fits that description. But J.K. Rowling is a little sneaky, you guys, and no, you can't just enter the last name so you have to dig into your memory, or cheat and dig into Google.

When you answer the riddle correctly, you follow Dumbledore and Harry in the Pensieve to the home of Hepzibah Smith via Hokey the house-elf's memory. And none other than Tom Riddle is there with her, holding up a locket with a big shiny "S" on it. Harry Potter and the Half-Blood Prince fans should remember this moment as a major turning point in the Hogwarts and Harry Potter universe. So book spoilers ahead if you haven't yet made it this far in the series.

The wealthy old witch met Riddle where he worked as a shop assistant, and he would visit her frequently with flowers. That is, until this one moment. Hepzibah showed Riddle — which you can see on Pottermore when you hover over the box in Hokey's hands — Helga Hufflepuff's golden goblet, and more importantly, Salazar Slytherin's golden locket, which she says was brought to the shop by a ragged looking woman. And Riddle knows that ragged looking woman to be his mother.

Believing the locket to truly belong to his family line, Riddle steals it and the Hufflepuff goblet for good measure, and disappears. Dumbledore believes that it was he who killed Hepzibah and framed Hokey.

This is all a big deal because, well, Tom Riddle is a young Lord Voldemort.

Not exactly the bright and cheery Christmas moment we all may have been expecting. If you click around in the moment, you can fill up your bar by moving trees and flowers and such, so there's no new writing or content. I'm willing to bet the house that our long-awaited Draco Malfoy moment is coming on day 12.