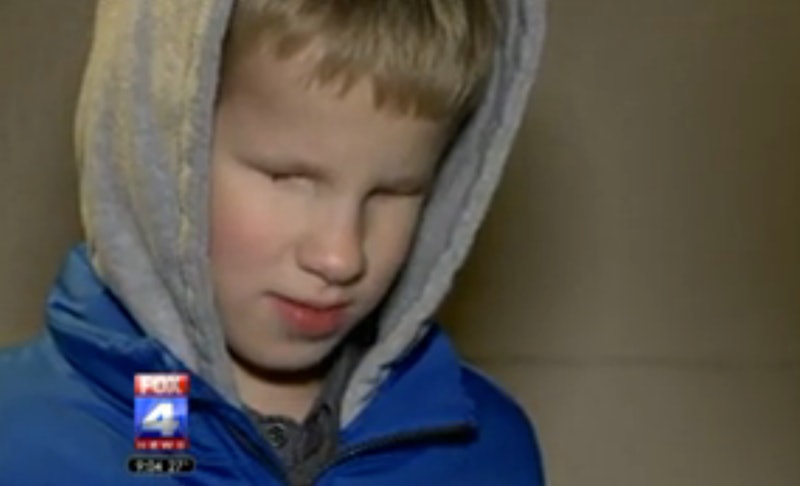 If you haven't had the chance to ask "What is wrong with people?" in a while, look no further. A North Kansas City School District took away a blind student's cane as a punishment and replaced it with a pool noodle. What? What? Who came up with this terrible, sick, twisted idea? Was there no sane adult in this school to maybe say "This is a terrible, sick, twisted idea and we shouldn't do that"?

The child in question, Dakota Nafzinger, is eight years old and was born without eyes. According to school officials, his cane was taken away by his bus driver after he reportedly hit another student with it on the bus. The cane is technically school property, and was given to Nafzinger when he enrolled. His parents, however, believe that the cane was taken away not to keep other students safe, but to humiliate their son. Which is sort of borne out by the fact that they replaced the cane with a pool noodle.

I'm going to repeat that. A pool noodle. They took a cane from blind child and replaced it with a pool noodle.

There is just so much that is wrong here, including the fact that kids roughhouse on the bus all the time. And it's worth noting that no one is claiming the child Nafzinger allegedly struck was in any way injured — not even as "injured" as kids normally might be from, say, elbowing each other. In fact, given that Nafzinger is blind, it's telling that no one seems to have even tried to determine if he hit anyone on purpose.

And then, of course, there's the lesser but probably still relevant fact that when I was a child I don't think I ever hit anyone more than when I whacked them with a pool noodle.

The school has since apologized for their mistake and returned Nafzinger's cane. North Kansas City schools said in a statement Wednesday

Which doesn't change the fact that someone at this school thought it was OK to replace a cane, which helps a blind student get around his environment, with a floppy pool noodle which is basically useless. I mean, trying to navigate with a cane has already got to be challenging enough. Trying to use a pool noodle? Not going to happen.

Hopefully nothing like this will happen again, and Nafzinger will receive all the support he needs from teachers from now on. And with any luck whoever thought that this move was remotely acceptable will get their head screwed on straight. Because seriously guys? Not OK.

More like this
The Most Powerful Photos From The Weekend’s Abortion Rights Protests
By Melanie Mignucci
The Families Of Grenfell Tower Are Still Waiting For Justice, Five Years On
By Bustle UK
15 Years Of The iPhone, In Pictures
By Emma Carey
YouTuber Runs Into Margaret Sanger’s Grandson While Filming
By Alexis Morillo
Get Even More From Bustle — Sign Up For The Newsletter