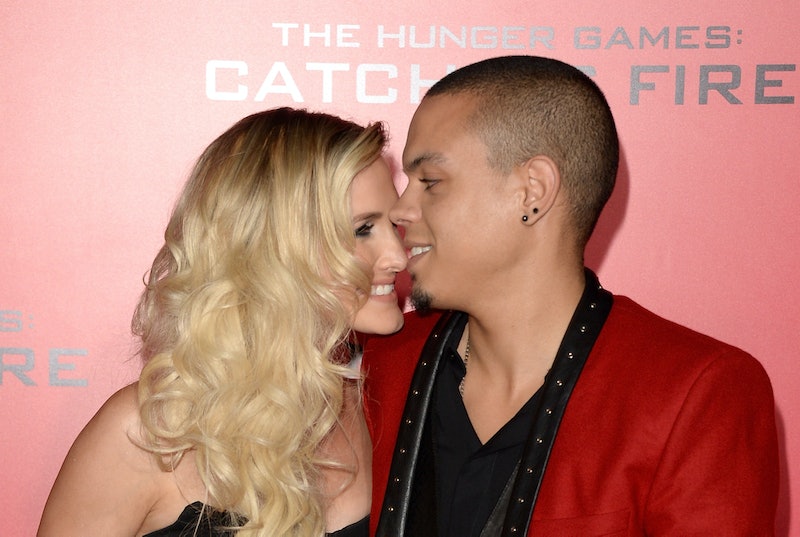 After weeks of speculation, it's been confirmed that Ashlee Simpson is expecting a baby with husband Evan Ross! These two kids didn't seem to want to take any time off — they just got married on Aug. 30 — but who can really put a timeline on these things anyway? One thing that expectant mothers do have to put a timeline on is when they're due, and as a fan you may be wondering when Ashlee Simpson is due, too.

But before we get to that, this new addition — a girl! — will be Simpson's second child, as she is already a proud momma to her six-year-old son, Bronx, with ex-husband Pete Wentz. I never thought I would be writing about Ashlee Simpson of MTV's terribly magnificent The Ashlee Simpson Show being pregnant with DIANA ROSS' GRANDCHILD, but it's 2015, and I suppose stranger things have happened.

Looks like everything is going just perfectly in the Simpson-Ross household, and their post-wedding glow is shining on all parts of their life. While I sit here and wonder when Simpson's new baby will be due, all I can imagine is how rad it must be to have this incredibly exciting news, while watching your new husband and love also embark on this new adventure along with you.

Back to when this sure to be adorable little baby will be birthed into a world where Diana Ross is her grandmother — can you tell I'm a fan? The answer is pretty simple since Simpson really opened up when she confirmed the baby news to People. She told the magazine that she found out she was pregnant on Thanksgiving, which means that she is likely due in August or September.

Simpson also told the magazine that she wanted to find out her baby's gender so she could decorate the nursery, and explained that soon-to-be big brother Bronx is excited about having a sister: "I told him pretty early on. And he wanted to have a sister, so he’s really excited!"

This baby will definitely be born into a family of love, a big brother and many adorable cousins (have you seen Maxwell and Ace?) and Ross seems to be ready! He told E! News in November at the premiere of The Hunger Games: Mockingjay — Part 1, in which he stars as Misella, that he and his wife were working on having a big family and added, "I would like... as many as possible. I got married, I have new music and I'm part of Hunger Games. It's been a great year."

And now with a new baby, these two lovebirds are going to have whole lot of beautiful things to sing about in 2015.