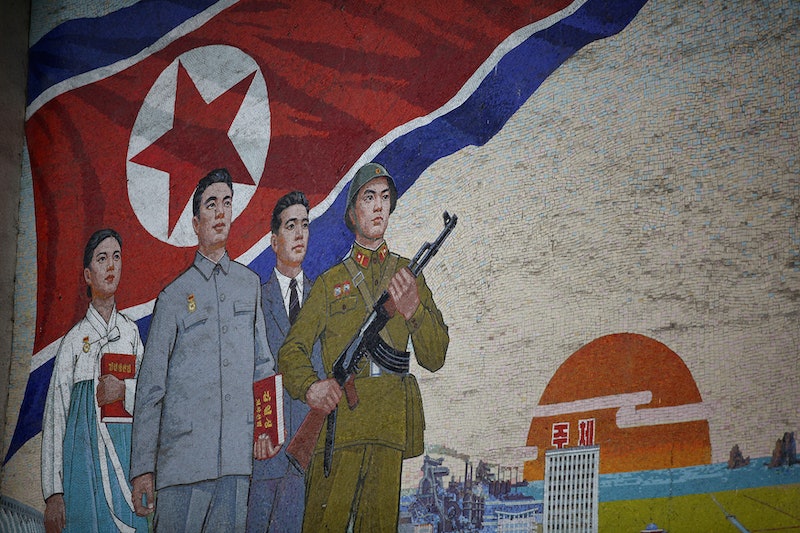 The federal government says North Korea was behind the massive hack on Sony. North Korea says it had nothing to do with the hack. Who's telling the truth? It depends on which government you ask.

Yes, just a few days after U.S. investigators alleged the North Korean regime was responsible for the devastating hack — ultimately leading to Sony pulling the upcoming The Interview from theaters — the North Korean government denied involvement. "DPRK (North Korea) is not part of this," a North Korean diplomat told Reuters on Friday. The diplomat wouldn't elaborate.

In a statement on Saturday, the North Korean foreign ministry accused the United States of slander and propaganda. To prove the country's innocence, the North Korea regime said it would like to join the U.S. government in its investigation:

As the United States is spreading groundless allegations and slandering us, we propose a joint investigation with it into this incident. Without resorting to such tortures as were used by the US CIA, we have means to prove that this incident has nothing to do with us.

North Korea state media added that if the United States won't cooperate with the investigation, there would be "grave consequences."

North Korea's harsh response comes a day after the FBI formally announced that investigators found solid evidence tying the regime to the hack on Sony Pictures Entertainment's internal servers. The FBI said in a statement on Friday:

North Korea’s attack on SPE reaffirms that cyber threats pose one of the gravest national security dangers to the United States. Though the FBI has seen a wide variety and increasing number of cyber intrusions, the destructive nature of this attack, coupled with its coercive nature, sets it apart. North Korea’s actions were intended to inflict significant harm on a U.S. business and suppress the right of American citizens to express themselves. Such acts of intimidation fall outside the bounds of acceptable state behavior.

The FBI said it identified North Korea as the hackers through the "data deletion malware" used in the attack. Federal investigators also found a "significant overlap between the infrastructure" of the Sony hack and other previous cyber security breaches that were "directly linked" to North Korea. The FBI explained:

For example, the FBI discovered that several Internet protocol (IP) addresses associated with known North Korean infrastructure communicated with IP addresses that were hardcoded into the data deletion malware used in this attack.

In his last press conference of the year, President Obama promised on Friday that the United States will respond to the Sony hack and North Korea. He also expressed disappointment over Sony's decision to pull The Interview from theaters, after movie-theater chains in the United States and Canada began receiving threats of violence from the hackers, who call themselves "Guardians of Peace."

Obama, who said that he enjoys Seth Rogen and "James Flacco" (also known as James Franco), believes Sony may have made a mistake by canceling the controversial comedy, which reportedly shows Kim Jung-un's head exploding, among other not-so-favorable depictions of the North Korean leader. "We cannot have a society in which some dictator someplace can start imposing censorship," Obama said.