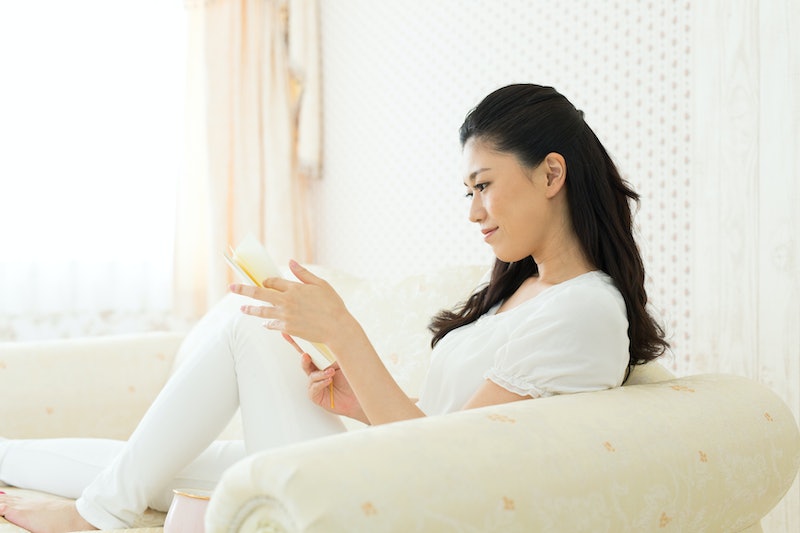 There is a bumper sticker affixed to the back of my bedroom door in my childhood home where I sit at this very moment, safely ensconced for the holidays in front of a roaring fire. In bold yellow letters on a blue background, the sticker screams across the room "Girls Can Do Anything." I don't know how long it's been there, but like the giant fuzzy white bear that lives on the end of my bed, it has been a part of my own personal zeitgeist for as long as I can remember — and yet my bookshelves are oddly incommensurate with the feminist message of equality in all things. My bedroom is an outdated homage to the men who at one point ruled the literary cannon.

I've gone through many years of intentional, deliberate reading to enjoy as many female voices as I have men, not because they are few and far between, but because they are all too often ignored in favor of their male counterparts on college syllabi, in local libraries, and throughout the public education system. I'm not telling you anything you don't know.

Yet these voices are irrepressible, undeniable and utterly invaluable — these stories deserve to be shared. So tomorrow the gloves come out, the tupperware bins come up from the basement, and the great purge begins: in January, I pledge to devote 50 percent of my shelf space to great female authors who have changed literature forever, beginning with these 10 underrated novels, well worth re-reading, re-stocking, and re-evaluating in the new year. Who's with me?

You've heard of Langston Hughes, you're familiar with Zora Neale Hurston and W.E.B. Dubois, but what of Nella Larsen? Larsen's searing critique of the double-bind faced by black women in the mid-20th century is piercingly observant and powerfully honest. As an acclaimed and influential literary voice among the chorus of artists rising to prominence throughout the Harlem Renaissance, Larsen's work expanded the discourse surrounding black womanhood with a poise, an honesty, and a dignity not soon forgotten.

The Tale of Genji by Murasaki Shikibu

The Tale of Genji has survived since the 11th century as one of the earliest extant examples of the novel and a shimmering tale of love, loss, intrigue, and honor in the Heian era court. The novel itself is a radiant example of epic complexity, maintaining the internal consistency of the plot throughout more than 1,000 pages, and sustaining the dramatic personae of more than 400 unique characters throughout the sprawling narrative. The story is supple, rich, and full of intricate character sketches that bring the time, place, and plot to life with unexpected immediacy.

Ursula K. Le Guin is a legend in her own right, and I'm not talking exclusively about her stunning and provocative performance at the 2014 National Book Awards. As a master of the genre narrative, Le Guin helps us to see our current moment more clearly through her delicate, detailed, fully realized renderings of a more fantastic time and place. Unfortunately, as is so often the case, as a woman and a genre writer Le Guin has been largely excluded from the canon. All that said, regardless of whether you've remained blissfully ignorant of Le Guin's work to date or already count yourself a devoted fan, The Left Hand of Darkness, as a tale of inclusion, gender, difference and adaptation, speaks so clearly and provocatively for itself there is very little left to say here. Left Hand of Darkness is a modern classic and Le Guin an under-appreciated auteur — if you read only one book in 2015, let it be Le Guin's.

A Tale for the Time Being by Ruth Ozeki

Ruth Ozeki's stunning, contemplative novel A Tale for the Time Being unfolds as both a mystery and a deeply felt drama, engaging with the story of Nao, a young Japanese girl buckling under the weight of bullying and loneliness as she struggles to document her centenarian great-grandmother's storied life as a Buddhist nun. When Nao's scattered papers wash ashore on a remote island and present themselves to a mysterious writer named Ruth, the plot thickens and the subtle threads of the narrative are pulled taught against the caustic, ringing prose of Ozeki's narration.

Oranges Are Not the Only Fruit by Jeanette Winterson

Oranges are not the Only Fruit is both a deeply complex coming of age novel presenting the trials of an evangelical teen discovering her sexual preference for women and an intricate story of family, faith, and friendship on the cusp of absolute collapse. As the winner of the Whitbread Prize for Diction, Winterson's powerful and provocative work has not gone entirely unnoticed, but her unique and passionate voice has yet to reach the audience it deserves.

As the first in a series of 13 novels, Richardson's Pilgrimage Volume 1 is widely recognized among literary scholars and experts as one of the earliest examples of stream of consciousness prose and modernist narrative techniques, yet Richardson's work is largely ignored today in favor of Joyce, Conrad, Elliot, and Proust, perhaps because of the extent to which Richardson privileges the female perspective within her daring and unexpected tale. If you love Virgina Woolf, live for Sylvia Plath, and simply can't get enough of Gertrude Stein, Dorothy Richardson and Pilgrimage Volume 1 should be your next read.

The Man Who Loved Children by Christina Stead

Christina Stead's bold and bone-chilling story hinges upon a basic struggle of the human animal — too many dependents and too few resources: the children cannot be cared for. Channeling desperation and deceit, mad visions and mundane realities, Stead sweeps the horror and banal humanity of daily life into one pent-up package bursting with pain aching with desire. Stead's work may just be the only broadly acknowledged contemporary classic you've never heard of before.

The Country Girls by Edna O'Brian

Edna O'Brien's rare bird of a novel follows the story of two childhood friends as they set off to conquer their dreams and embrace an uncertain future. As life, love, and lingering doubts threaten to disrupt their fragile bond, Kate and Baba fight to find their own ways through the world and find themselves in the process. With a clear and simple prose, O'Brien sees through her characters well-conceived outer shells to the beauty, fragility, and fundamental decency within.

Love Medicine is one of the most stunning debut novels ever to make its way onto my desk, an epic saga of generations of Native American families on and off the reservation over the course of more than 50 years. Breathing new life into the pure and powerful stories of a people long ignored by popular fiction, Erdrich's stunning tome elevates simple, human tales of life and love through an absolute mastery of the art and craft of narrative.

My Ántonia by Willa Cather

Will Cather's spare, puritanical prose perfectly captures the essence of early America, with My Ántonia serving as the quintessential example of prairie fiction. Witten in 1918, Cather's My Ántonia is both a story of the frontier and a tale of modern American womanhood — rich, complex, biting, and beguiling. After a second (or third) read of this Cather classic, you might just find yourself pondering another set of shelves if it means making space for more exceptional work by incredibly fine female authors such as these.