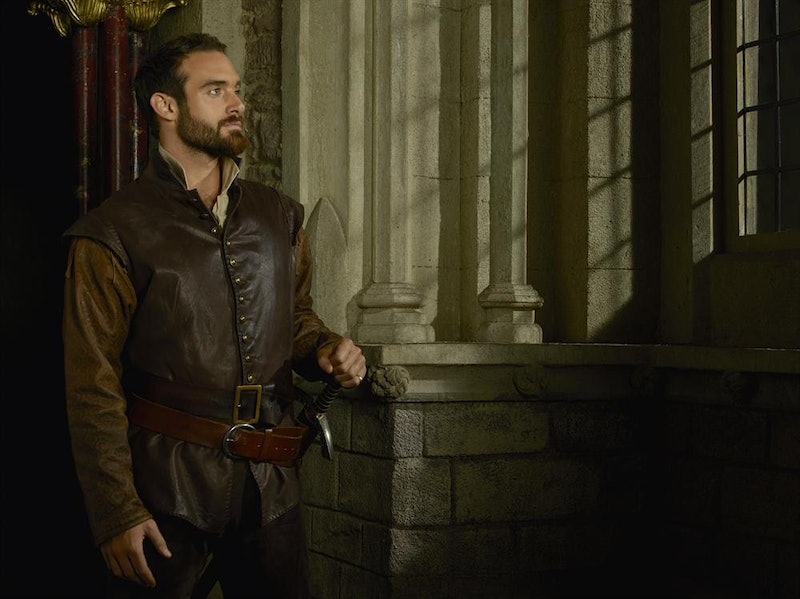 If you've tuned into ABC in the past couple of weeks, you've surely seen one of the previews for Galavant. It's goofy, it's got Weird Al, and it's a brand new series filled with mostly unknown actors. What, precisely, is ABC's new show Galavant ? It is a musical comedy. A musical comedy "extravaganza," if you will. Now, Galavant won't be like Glee or Smash, where most of the time the characters had some (often contrived) reason for breaking into song. On Galavant , the characters sing because that's just the type of world they live in and we all need to get on board. As you may have heard, the guest star list is out of this world. They've got Ricky Gervais, Weird Al Yankovic, John Stamos, and Lord Grantham himself, Downton Abbey 's Hugh Bonneville.

Unfortunately, the season will only last four weeks. It's a mini-series intended to fill the gap between now and when Once Upon A Time returns, but don't expect to draw too many comparisons between the two fairy tale series. Besides being a musical, Galavant has a much lighter tone. It's more of a parody than a deconstruction of medieval stories — think of it like Ella Enchanted meets A Knight's Take. Or Princess Bride meets Monty Python And The Holy Grail. Or Robin Hood: Men In Tights meets Shrek. Seriously, we've all been there before.

However, from what I've seen, Galavant will be a fresh take on both fairy tales and musicals. Here's all we know so far:

It's a Hero's Journey

The story of Galavant is already pretty twisted. Our hero, played by Joshua Sasse, sets off to rescue his princess Madelena from her evil fiancé King... and gets rejected! That's right. The girl, played by Mallory Jansen, chooses financial security and fame over love. His first taste of failure sends Sir Galavant into a depression. Already, this sounds more like the beginning of a sitcom than your typical "Happily Ever After" story.

Next, a princess from the far off kingdom of Valencia comes to Galavant asking for help, and that's where our story begins. According to the official ABC press release, their quest will also involve defeating Madalena's now husband, King Richard. The Knight "...is off to become a hero again and strike a blow for true love… but first, Galavant has to fit into his old hero pants." Huh, wasn't that a scene in The Incredibles? Anyway, the two set off to raise funds and plot their revenge while Madalena and Richard navigate their life as newlyweds.

It's From Alan Menken

These songs are going to stick with you. Alan Menken is the composer behind almost every school bus singalong and sleepover recital you've ever been a part of in your life. I'm not kidding — he wrote all or part of the songs for Beauty and the Beast, Newsies, Little Shop of Horrors, Aladdin, The Little Mermaid, Pocahontas, Enchanted, Tangled and Hercules. This show is in good hands, tune-wise.

The Cast Is Diverse

Which is awesome, especially for a fairy tale, because so many people tend to cling to a sense of "historical accuracy" that isn't always accurate and anyway doesn't matter because... it's a fairy tale! In this preview, we meet Isabella, played by Karen David. Rounding out the cast is Sid, played by Luke Youngblood, who you know today as Magnitude on Community and remember for playing Lee Jordan in the Harry Potter films.

The writer/creator Dan Fogelman wrote the incredible screenplay for the romantic comedy.

It Will Be the Best Four Weeks of Your Life

Seriously. This fan video says it all.