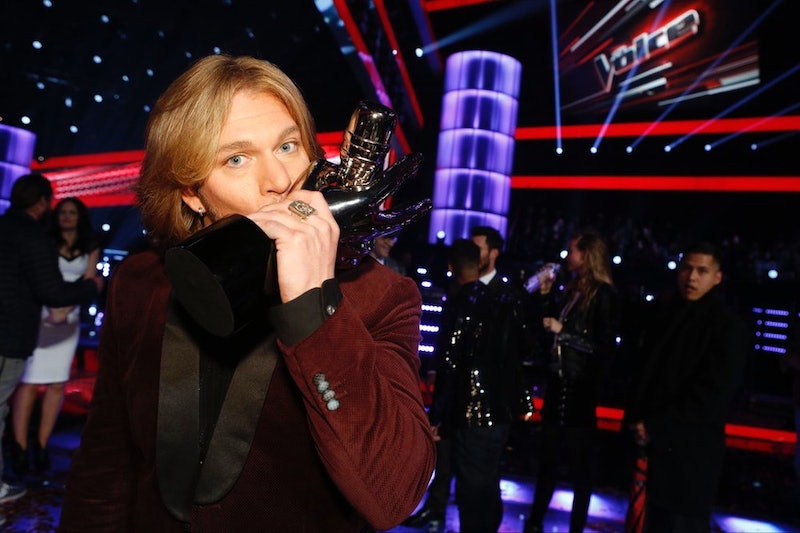 The seventh season of The Voice was hands down the toughest as far as choosing a favorite — there wasn't a single contestant who didn't have a break-out moment and it was truly anyone's game to lose. But when it came down to final performances, Craig Wayne Boyd's original song "My Baby's Got a Smile On Her Face" sealed the deal. Coach and mentor Blake Shelton said he's been carrying the romantic ballad around in his back pocket for years and the only reason he hasn't used it is because the powerful song is simply too difficult to sing. But not for this honky-tonk country rocker. With beautifully written lyrics and a dreamy music video, Craig's new single has already sky-rocketed to No. 2 on iTunes. But he obviously didn't write it, so who is Craig Wayne Boyd's original song really about?

At first, I assumed the song had been written by Blake Shelton himself. Hearing how passionately Blake talked about the single's meaning, you couldn't help but wonder if the adoring lyrics came from his own hand. After all, he is the master of starry-eyed country hits. But this particular piece was written by up-and-coming country songwriter Stephanie Urbina Jones, who gratefully dubbed the rising hit her "Christmas miracle," and Loretta Lynn's son-in-law Mark Marchetti. So when you're jamming out to country radio and wondering what the dreamy lyrics mean, keep in mind that it's not about Miranda Lambert, or Craig's on-and-off girlfriend, or the hot chick in the video.

The most common misconception about "My Baby's Got a Smile On Her Face" is that it was written for Blake's stunning country superstar of a wife, Miranda Lambert. Blake might have had his eye on this song with Miranda in mind, because how can you be Blake Shelton's wife and not have a smile on your face? But keep in mind that the reason for his hesitation on using the song for himself because it was written way too high for his voice. In other words, Blake didn't write it. I certainly don't want to belittle how adorable it was for Blake give up the song for his Voice champion — but if he didn't write it, it's not about Miranda.

Another confusing aspect of Craig's career is the blonde woman who holds his adorable son during the live shows. Some people think "original song" means Craig must have co-written it (which he did not), but even if he had, this woman is not his wife. Rumors about Craig's baby mama, Natalie Hoover, suggest that the couple might not even be together anymore — in which case the song definitely wasn't dedicated to her even in the finale moments.

Although we don't know for sure who Stephanie Jones and Mark Marchetti had in mind while writing their country masterpiece, the most likely inspiration for the song might be Mark's wife and country superstar Loretta Lynn's daughter, Peggy Lynn. But for Craig's sake, for now, we can fantasize that the new hit was actually written in honor of the adorable made-up couple you see in the video. You can watch the music video version of Craig's first single here: