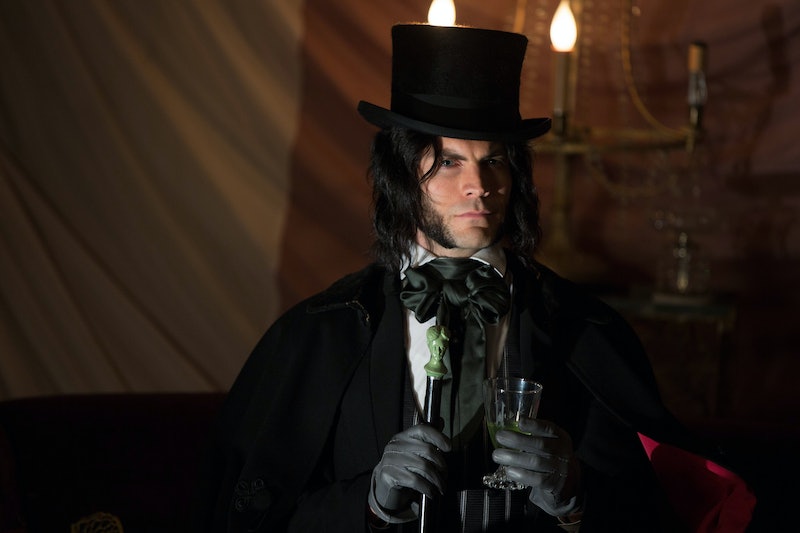 We have been patiently awaiting Edward Mordrake’s return to AHS: Freak Show. Right after the two-part Halloween special aired, Ryan Murphy said in an interview that we can expect Wes Bentley to reprise is two-face role. He told Entertainment Weekly, "But Twisty is not over, and neither is Edward Mordrake. They both make triumphant returns." Even though we have not been given any specifics on when we will see Mordrake again, we can assume that he is coming to take someone else. The only question left is who?

Last time we saw Edward Mordrake was because Elsa decided to perform on Halloween, despite knowing full well that performing on Halloween conjures up Mordrake so he can appear and take a freak to hell with him. When Mordrake's second face judges the candidates, Mordrake then basically murders his tribute and has them join his undead entourage.

When Mordrake first visited, he went around Elsa's freak show trying to find someone truly terrible, eventually landing on Twisty. In my opinion, as messed up as Twisty was, he was mentally-challenged and not so terrible once we learned his story (Mordrake maintained that he wasn't remorseful enough, but that seems a little unfair).

Since Murphy hinted at his return, I have started thinking about all the people that have potential to be Mordrake’s next, hopefully more deserving, victim.

The last time Mordrake came to the Freak Show he was looking for someone who was truly evil to take with him. It’s definitely a good possibility that Dandy will be the one taken away this time if they are trying to get someone “evil.” This is the most likely outcome for the episode and since Dandy is our main villain, if Mordrake is after Mr. Mott, the ghostly two-faced man will show up in the final episode.

He keeps pulling out his penis, which Murphy confirmed is 13 inches long, making Stanley qualify as a freak who Mordrake could potentially drag back to hell. Stanley is also very evil and conniving, so, if Mordrake doesn't take the obvious choice (Dandy), I could definitely see Mordrake coming back and taking Stanley away. At the end of the last episode, Maggie and Jimmy were working on a plan to get Stanley out of the way and Mordrake might just be the perfect plan.

I know that we don’t know much about Neil Patrick Harris’ character Chester, but he totes around a puppet with him and from the previews, it looks like he murders someone in his magical act at the freak show. Plus, he looks like a creep. And then there is the part of the preview where even Dandy says, “What a sicko.” It doesn't bode well.

Elsa is least likely of the group to go to hell, mainly because Pepper sees a magazine cover with the title "TV’s Elsa Mars" in the last AHS episode. Obviously, we are unsure when that happens, if it’s real or a dream, or even what that means, but it probably means that Elsa is still alive at the end of all this.

However, there is a tiny sliver of a chance that Mordrake could take her and Murphy could fashion some story-telling loophole. She has become fairly evil since the entire show began, coming off like she loves the freaks and then killing Ethel. That was rude.

Plus, wouldn't taking someone like Elsa, rather than the obvious choice, Dandy, add that shock we all crave?