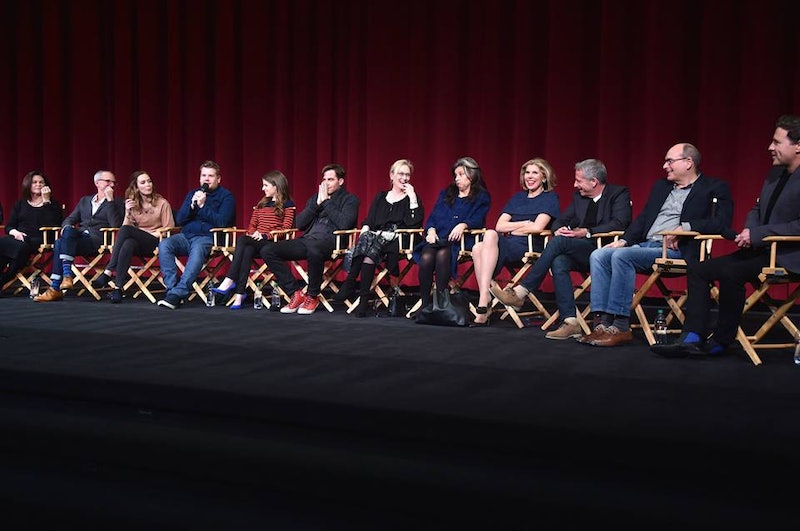 Casting actors who don't identify as singers in musicals is always a gamble, whether it's on Broadway or the latest film adaptation. Nobody likes it when talent is traded for name recognition. Which movie stars were the best singers in Disney's Into The Woods ? This isn't as easy to judge as last year's Les Miserables, which had such obvious winners and losers. In my opinion, everyone in Into the Woods sang their part well! There were a few times where the singer made a choice I didn't agree with, but the talent was there. Sondheim often writes for actors and actresses who can't sing as strongly as the big Broadway belters. Sure, The Witch was originally played by powerhouse diva and infamous back-phraser Bernadette Peters. However, "Send In The Clowns" from A Little Night Music is one of his most famous songs and it was written for Glynis John's inability to hold notes for long periods of time. The acting is what counts, and different characters call for different ranges. You would never ask the person playing The Baker to sing "Giants In The Sky." However, there are some actors who should definitely consider a career in musical theatre, and others not so much.

Here's all the singing ranked — but try to think of it as a showcase of who was great rather than terrible!

It’s possible that I’m still bitter about Sweeney Todd but Depp’s voice just doesn’t do it for me. This was a step up from "The Demon Barber of Fleet Street," but still sounds more like rhythmic slurring to me than actual singing. Clearly, we have some artistic differences.

Does anybody care about Rapunzel? I'm joking! I just think she’s sort of intentionally warble-y. The girl's been locked up in that tower her entire life. She's probably imitating the birds, which isn't exactly Juilliard training. MacKenzie Mauzy has a lovely singing voice that we unfortunately didn't get to hear enough of in this role.

I am not even including the Stepsisters (played by Lucy Punch and Tammy Blanchard) or Cinderella's Mother (played by Oliver winner Joanna Riding). The Stepmother, on the other hand, has a meatier role. Granted, her role is a bit more screaming than singing.

I did not have high expectations for Jack's Mother, and was very impressed with Tracey Ullman's performance!

Don’t get me wrong, this girl is very talented and obviously has a very strong voice. What I’m about to say may not even be her fault (it was your fault). Here’s the thing — Lilla Crawford played Annie on Broadway, and her voice is still playing Annie on Broadway. It did not fit the character at all.

Again, it’s hard to compare because the different characters are given such vastly different material to perform. James Corden's speaking voice is so pleasant that I'd listen to him sing anything. I don't think we'll see him in Phantom, but his voice was fine! As the witch would say — it's not good, it's not bad, it's just nice.

I think my only issue with his voice is the unnecessary accent. Can Pine be in more musicals, please?

This is definitely a better vocal style for Streep than Mamma Mia, which I did not love. If you want belting, here's your belting.

My apologies to Chris Pine, but Rapunzel’s Prince does have a slightly stronger singing voice.

I don't think Emily Blunt is going to record an album any time soon, but her acting in the songs is incredible and I can't stand to rank her any lower than this.

I’m as surprised as you are. This kid rocked it! Gavroche lives, y’all!

We’ve known Anna Kendrick can sing, but this isn’t the range that we’re used to hearing from her. Kendrick stretches her soprano muscles in Into the Woods and does not disappoint.