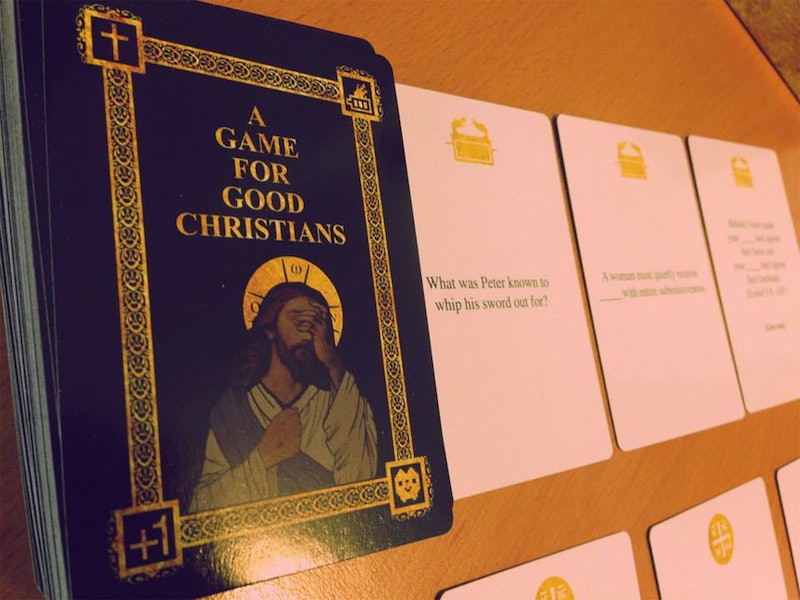 It's possible that you've had your fill of Cards Against Humanity this Christmas season, whether you enthusiastically ordered their literal bullshit or took part in the Ten Days of Kwanzaa or Whatever. (I just got my last envelope today, and am the proud owner of one square foot of land on the fictional island Hawaii 2.) But the fun doesn't have to end this year, because we just found the perfect last-minute gift for all your church-going buds: There is a new version of Cards Against Humanity called "A Game For Good Christians," which is, you guessed it, a card game that uses Bible verses for all of its situations and nouns.

Now hold on and reserve judgment (uh, the way that God would, hello?). The game has aptly dubbed itself "The only Christian game not afraid of the Bible," because upon closer examination we find that it is pretty liberal with its interpretation of Biblical times (at least I'm pretty sure there wasn't anything verbatim about "Paul urging his agitators to show more than just the tip" in the original version). The site itself says that it welcomes both cynics and mystics, and that you don't necessarily need to know a lot about the Bible to enjoy the game.

That being said, all of the cards, satirical or not, have a (sometimes alarming) grain of truth in them. But according to the creators, "Those who have been uncomfortable playing this game have had the most trouble with Canon Cards which quote directly from the Bible without any clever commentary from us."

Now, I know the most pressing question on your mind right now (other than "Did I remember to get cheese at the store?") is, "Can I mix this with Cards Against Humanity?" And the answer, my fellow card game fans, is YES YOU CAN:

Each deck has 300 cards, 60 "Creed" (no) cards and 240 "Canon" cards, which starts at $35. They also offer two expansion packs and a deluxe version. Here are a few more images of God's new favorite card game:

Images: A Game For Good Christians/Facebook