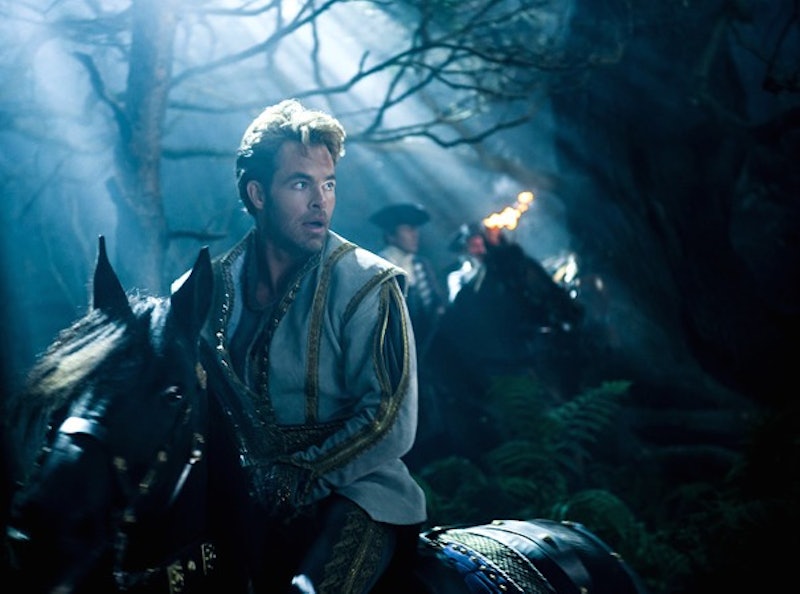 If you plan on seeing the big screen adaptation of Stephen Sondheim's Into the Woods this Christmas, prepare to be blown away. No, not just by Meryl Streep's impressive pipes or Emily Blunt's proven ability to do anything, rather the surprising comedic chops by none other than Chris Pine. Yes, that Chris Pine. The hunky star best known for his decidedly unfunny roles in action movies like Star Trek and Jack Ryan: Shadow Recruit.

While the handsome star stretched his comedy muscles in this year's Horrible Bosses 2, it doesn't compare to the gut-busting, scene-stealing job he does as Cinderella's (Anna Kendrick) dopey, womanizing Prince. Pine's Prince embodies every hot guy you've fallen for, only to sadly discover there's not much going on behind those sparkling blue eyes. But, thanks to Pine's pitch-perfect performance, he's a handsome idiot that you'll love to hate. His comic timing is impeccable and goes all-out with a character that's meant to be over-the-top. Even in the wildly impressive Into the Woods ensemble, Chris Pine steals the whole movie.

While there are plenty of hot guys out there that are also very funny (that is, after all, the dream), Chris Pine isn't the first sexy star to surprise us by transitioning from serious work to comedy. In honor of Into the Woods, here's seven other Hollywood studs who had comedic chops hidden up their sleeves. (No, it's not just their biceps up there.)

Brad Pitt in Burn After Reading

Brad Pitt showed signs of being funny in addition to being the most beautiful man in the world, but it wasn't until his work in the Coen Brothers 2008 crime caper Burn After Reading that proved he could be downright hilarious. As a fitness nut and bumbling wannabe blackmailer, Pitt played clueless so convincingly. You've gotta be damn smart to pull off stupid this that well.

You could certainly trace Channing Tatum's comedy skills back to his performance in She's the Man, but it's his work as a sensitive jock/undercover cop in the 21 Jump Street franchise that not only made him one of the biggest stars out there, but a bona fide comedy powerhouse.

It's a shame that Bradley Cooper has been relegated to romantic comedies, because the Oscar-nominated actor is a scream in off-the-wall, cult comedies like Wet Hot American Summer. He should do more of those.

Sure, Zac Efron's abs are on full display in this raunchy comedy, but he's still able to go joke-for-joke and Batman-impression-for-Batman-impression with bona fide funny man Seth Rogen.

Colin Farrell in In Bruges

In Bruges remains Farrell's best performance to date, comedic or otherwise, thanks to the fact that the number of times he puts a lump in your throat is equal only to the amount of times he'll make you laugh until you cry as a tortured hit man.

How come Matt Damon isn't in more comedies? Scotty doesn't know, and neither do we.

Chris Evans in Scott Pilgrim vs. the World

How come Chris Evans isn't in more comedies? Scott Pilgrim doesn't know, and neither do we.