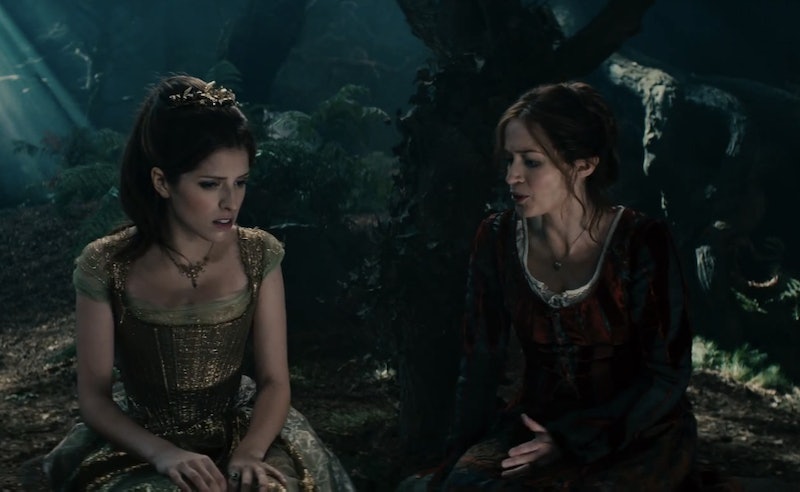 The new Into the Woods trailer solves all the problems people have been freaking out about for months: it's filled with music. OK, maybe filled is the wrong word, but we have to be happy with hearing two songs from Stephen Sondheim's musical adaptation until the movie comes out on Dec. 25. The latest footage features the fantastic prologue refrain "Into the Woods," plus more of the Witch (Meryl Streep) singing "Stay With Me" to Rapunzel. Though we got a glimpse of Streep singing in a recent Into the Woods featurette, this version just proves she's a multi-talented phenomenon. Bow down.

Unfortunately, this new trailer doesn't include everyone singing. The Prince (Chris Pine) has yet to show off his pipes, and I'm ready to hear Cinderella's (Anna Kendrick) solo — cups not included. There was a moment in which I thought that Cinderella and the Baker's Wife (Emily Blunt) would sing "A Very Nice Prince," but instead, they just chatted about how not charming marrying a prince can be.

Although there weren't a slew of songs, there was a lot of danger and action in the new footage. We see everyone on the run from the Witch — even as she wears quite a glamorous outfit in the woods — and craziness like fighting against the Giant from Jack and the Beanstalk, feuding with each other (that's Cinderella and her prince for you), The Wolf (Johnny Depp) vs. Red Riding Hood (Lilla Crawford), and more. Check it out below, and don't be afraid to sing along.

More like this
The 'Love, Lizzo' Harry Styles Scene Is Just 1 Moment That Made Fans Feel Seen
By Brad Witter
Everything To Know About 'Magic Mike’s Last Dance' Starring Channing Tatum
By Jack Irvin
Idris Elba "Breaks Out" Of London In 'Luther' Film First Look
By Sam Ramsden
'Avatar 2' Now Has A Teaser Trailer & Release Date
By Jack Irvin and Alyssa Lapid
Get Even More From Bustle — Sign Up For The Newsletter