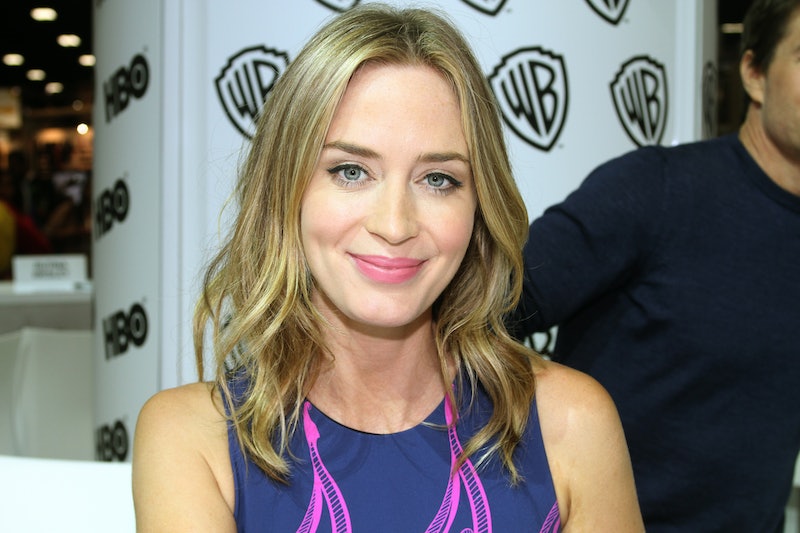 If the prospect of a sequel to The Devil Wears Prada doesn't stir your very soul, you can see yourself out. Emily Blunt recently said in an interview with E! about her upcoming musical Into the Woods (in which she also stars alongside the magnificent Meryl Streep, as she did in Prada): "I would do it, but only if everyone did it. I don't know why it hasn't been done, but everyone's got to do it." WHY exactly hasn't it been done?! Maybe because Laura Weisberger, the author of the 2003 book with the same name that inspired the movie, didn't write a sequel until 2013. But then she did. So where's the movie version!?

If you look up The Devil Wears Prada on Rotten Tomatoes, it only has a 75% from critics. Which, yes, is totally respectable, but considering how much of a cultural touchstone it is. For context: 22 Jump Street has an 84%. Pretty incongruous. So far Blunt, whose first real American exposure was in Prada (when she was only 23!), the first to say that she's down for a sequel.

I'd be willing to bet that Anne Hathaway would pick up the sequel in a second — she's had her share of Hathahate which she has so gracefully dismissed, and Prada made her pretty likable way back when. Meryl Streep and Stanley Tucci honestly seem like they are up for anything at any time. Bonus: Emily Blunt is Stanley Tucci's sister-in-law, which is so adorable. So it would be a family affair. But would all of them even be in the next installment of the story?!

Obviously for a little insight about the plot one might take a look at at the Wiki of the plot of the sequel, Revenge Wears Prada (does not make a lot of sense as a title, but points for parallel structure). It goes as follow: the events take place ten years in the future (good, good, as its been almost ten years since the first film was released). Andy and Emily apparently became BFF and now run a bridal magazine together...? Andy's about to get married, but not to her quirky chef Entourage boyfriend. To some rich guy. And she is apparently "haunted and harrowed" by her time with Miranda... who she meets again, of course. And as the title suggests, I assume Andy takes revenge on her... perhaps wearing Prada.

Problem is, in the movie version, beautiful and cold Meryl Streep/ Miranda Priestley's heart is warmed by Andy's fire and she gives her a job recommendation. In the book, apparently, Andy tells Miranda to go fuck herself, gets banned from the publishing world, then has to move in with her parents and live off of employment. I would want revenge, too. Hopefully, if there is a sequel, Andy and Miranda will meet again but Andy won't try to murder her or whatever other creepy "revenge" the sequel's title implies.