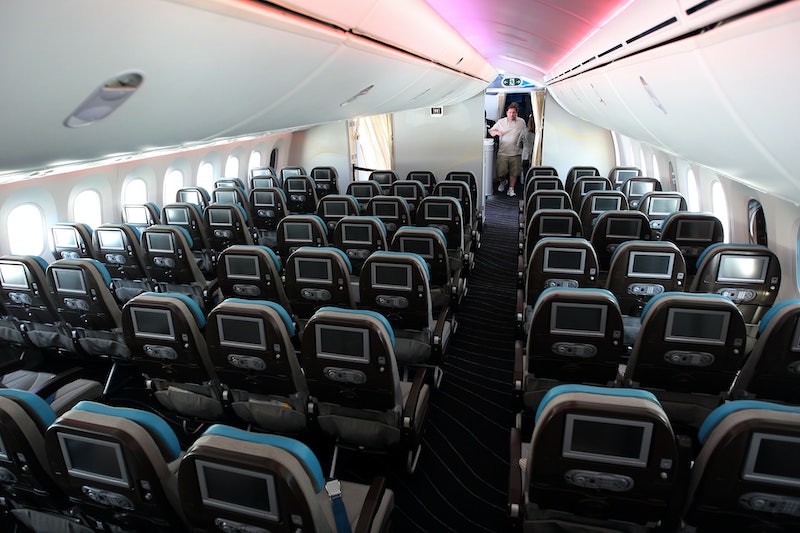 The great Existential philosopher Jean-Paul Sartre once wrote that "Hell is other people." You know what happens to be filled with other people? Airplanes. Coincidence? Oh, I think not.

We're never more our worst selves than when we're on an airplane. I speak of myself here: in real life, I am a curmudgeon who can be coaxed into small talk and attending parties where there might be an open bar; but on an airplane, I am a witch who lives in a cave, and if you ask me what I'm reading or how I enjoyed my vacation, I will take out my broomstick and put a pox on your children and your children's children. I don't mean to. But when we get on airplanes, competing for limited PopChip-based resources and sucking in everyone's airplane farts, we all go a little mad sometimes.

And so, with that in mind, I would like to note that the 15 airplane jerks who make flying terrible are quite possibly decent, stand-up people in their day-to-day lives. Maybe they volunteer at soup kitchens, save kittens stuck in trees, and spend way less time on the Internet than any of the rest of us. But in the sealed nightmare tube that is an airplane, they are horrible, and you must do everything you can do to fight them. Because up there, it's every jerk for themselves.

In this life, we all must choose our battles. And the Elbow Warrior has chosen to expend all their energy on getting full custody of that damned arm rest. And they will stop at nothing to get it, utilizing tactics that invade your personal space and aim to wear you down, such as applying gentle but firm pressure against your arm for the entire duration of Guardians of the Galaxy until you just give up and put your elbow in your lap, or on your gross sticky food tray.

How to Fight Back: Decide if this is your battle, too: Is it worth expending the energy it will take to capture this arm rest? If so, then feel free to apply as much gentle yet firm pressure as you like back, and make a power grab when they lean over to get a ginger ale from the flight attendant or something. But if you decide it's not worth it, just pull your elbow away, concede the arm rest, and spend the rest of your flight thinking about how the Elbow Warrior probably has no friends in real life and spends a lot of time leaving mean YouTube comments.

How to Fight Back: Since the Camper will be too busy fiddling with their reversible fleece blanket to catch you giving them the stink eye, you are going to have to bite the bullet, tap them on the shoulder, and say, "Excuse me, but your huge horrible Cabin Pillow is going to third base on me. Could you move it?"

The Person With No Shoes On

This is just a person with took their shoes and socks off when they got on the plane. Sometimes the simplest assaults are the most impactful, you know?

How to Fight Back: If you're nonconfrontational, say nothing and try to block the stank by pulling your t-shirt over your nose until you adjust to the scent. If you're very confrontational, ask them to put their shoes back on. If you're passive-aggressive, maybe drop a mini-pretzel on their foot and see what happens.

Did you know if the Chatterer stops talking for even twenty seconds, they'll die? It's like the way sharks can't stop swimming. Oh, wait, no it's not, this person is just a total pain in the ass and thinks they can force you to enable them/look at pictures of their trip to Epcot.

How to Fight Back: Use every tool in your arsenal to shut down the Chatterer — get monosyllabic during their opening convo, and as soon as there is a break in conversation, run to your book and headphones. Even if you're not listening to music, just put the headphones on. If they say anything once you have the headphones on, just kind of smile and nod and shrug your shoulders, as if to say, "I'd love to know what you're saying, but ... headphones!"

This jerk is the same as the regular Chatterer, only you can hear them from about three rows in each direction, raining down their inanities on some other unfortunate soul.

How to Fight Back: On one hand, you're lucky — you're not the intended victim who is going to have to sit through a whole plane ride listening to detailed reviews of all the restaurants near the Holiday Inn in Augusta. But on the other, you can still hear all of it. Just turn your headphones up as loudly as possible, and promise to make it up to your ears by listening to some soothing whale songs tomorrow.

The Chatterer With Ulterior Motives

"Oh, are you headed home? Do you live in Phoenix? Me, too! That's funny — not only do I live in Phoenix, my multi-level marketing company is also based out of Phoenix. We specialize in toilet paper, chewing gum, and all-natural male enhancement remedies. You seem like a real self-starter. Would you like a pamphlet?"

How to Fight Back: Utilize any of the tactics you'd use on a traditional Chatterer, or, if you're feeling sassy, just make something up ("I'd love to get involved in your pyramid scheme, Bob, but unfortunately, I'm a Satanist, and we're just not allowed to sell generic toilet paper to strangers. It's just one of our spiritual laws, I'm sure you understand. Would you like a Mentos?")

"This plane ride sucks. My mom sucks. You suck. Everything sucks except turning my iPod up so loud that everyone around me can hear the dulcet tunes of my favorite band, Still I Rise From the Black Ashes of the Black Parade Inside My Heart."

How to Fight Back: Just complain to their parent(s).

"Hey, it's 5 o'clock somewhere, right? I mean, it's 9 a.m. on Christmas Eve morning on this plane to Louisville, but that doesn't mean I can't grab a connecting flight in Margaritaville, if you get what I mean. Do you have any Xanax you could spare?"

How to Fight Back: When you're seated next to a drunk passenger who's acting up, there is genuinely nothing to do but get the flight attendants involved. You're not being a tattle tale, you're just being a mature adult who is trying not to get barfed on while drinking your sad complimentary coffee.

Hey, a long flight is a great time to get around to doing all those things you've been putting off — like sending emails, catching up on your reading, clipping your fingernails, plucking your eyebrows, doing some light pubic grooming ... wait, what?

How to Fight Back: Having personally tangled with this one, I recommend just getting up and asking a crew member if you can switch seats. There's no real point to in attempting to reason with someone who thinks its cool to get toenail clippings on the floor of a 747.

The Person Eating a Four Course Meal They Brought From Home

And all four courses appear to be made of some substance that has been both deep fried and soaked in vinegar.

How to Fight Back: There's nothing you can do here, bucko. It's gross, but they are within their rights. Just sit back, think unpungent thoughts, and wait for your nose to adjust.

"Man, these seats are so small these days. Good thing I learned this cool life hack to make extra room: ram your knees into the seat in front of you. Ahhhh, extra leg room for free!"

How to Fight Back: Your options are guerrilla warfare (i.e. purposely slam your back into your seat, so that it whacks their knees), or politely asking them to move their knees. Neither of these methods actually yields any results, so it's mostly just a matter of what will make you feel better at the end of the day.

The Person Who Forgot to Take a Shower ... For About a Week

How to Fight Back: If your flight isn't sold out, try discretely asking a crew member about moving seats (I'd suggest getting up and pretending to go to the bathroom, and then asking whoever is working in the back of the plane). But if it's a sold out flight, I am afraid that you are up stank creek without a paddle, friend.

How to Fight Back: No real option here but passive aggression — so if you feel like being petty, take a loooooooong time getting up out of your seat to let them by.

For every one of those amazing live tweets of someone's meltdown on an airplane, there are a dozen dickheads who think it's hi-larious to Instagram a picture of you sleeping with your mouth open because, uh, you know, comedy!

How to Fight Back: If the idea of this bothers you, I'd suggest wrapping up pretty snugly in a blanket before you fall asleep, and turning towards the window. If it doesn't, then just roll with the sweet ride of viral celebrity, I guess! Maybe you'll become a meme and get to be in a Weezer video or something.

Were you extra careful to pack all your breakable gifts in your carry on? This Smashley Simpsons cares not; they just want to jam their too-big bag into a too-small area, and they don't care how many of your Joe Biden commemorative plates they have to smash to get their stuff.

How to Fight Back: There's always the "fake help," where you get up, ostensibly to help them position their baggage, but really to protect your stuff. Or, you can just make sure to keep the really fragile stuff in the space under your seat, and not get involved in this whole thing.

More like this
Expert-Approved Hacks For Packing A Carry On
By Jessica Goodman
Where Was 'The Bachelorette' Season 19 Filmed? More European Destinations Are On The Way
By Radhika Menon
I Tried Float Therapy In Iceland's Blue Lagoon — Here's My Honest Review
By Alexandra Owens
12 Photos Of Jennifer Lopez & Ben Affleck All Loved Up In Paris
By Radhika Menon
Get Even More From Bustle — Sign Up For The Newsletter