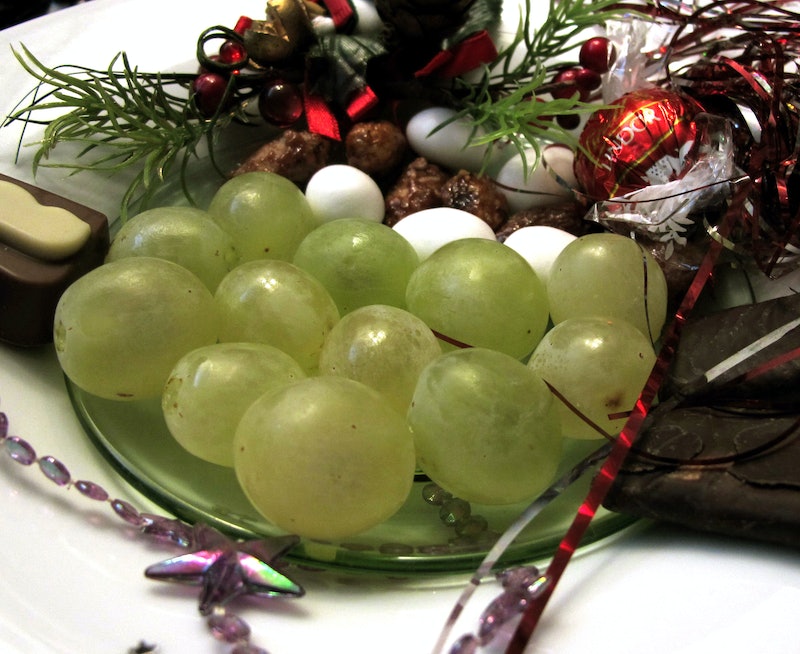 The New Year is a time to embrace tradition, whether that means following New Year's Eve traditions of staying home and coming up with resolutions, or going out year after year in the hopes that your expectations for NYE will finally come through. Tradition can mean falling asleep during New Year's Rockin' Eve, or it can mean standing out in the freezing cold in Times Square. But no matter where you are or what you do to bring in the New Year, there is one tradition that everyone partakes in: eating.

Across the world, people celebrate the advent of another spin around the sun with food and drink that symbolize prosperity, good luck, and more. We've got to say — there's nothing better than delicious food that also ensures that a good year lies ahead. And no matter what your background or where you come from, these 12 food traditions will at least make you feel like you're starting 2015 off on good terms.

For the best year ever, try one of these lucky dishes when the clock hits midnight. You may just find your fortune increasing — or you'll at least get to experience a delicious cultural tradition. Here's to a happy and healthy New Year!

In Japan, soba noodle soup is slurped to bring in the New Year. The healthy, long buckwheat noodles symbolize longevity.

Germans traditionally eat sauerkraut on New Year's Eve to bring in wealth and good fortune in the New Year.

When the clock strikes midnight, people in Spain are quick to eat 12 grapes for good luck. This tradition is carried out rapidly — superstition suggests that skipping this act will start the New Year off on the wrong foot.

This Italian dish symbolizes prosperity and good fortune in the New Year. Circular lentils look like tiny gold coins, while pork is thought to bring luck.

After this Greek cake is baked, a coin is inserted inside. When the dessert is served at midnight, whoever receives the coin is granted extra good luck for the New Year.

In Poland, this briny fish is consumed to ensure a prosperous New Year — after all, this seafood is extremely abundant in Western Europe. It only makes sense that it should bring an abundance of wealth.

Cuba is just one of the many countries that sees pork as a lucky food. This lavish dish is a New Year's centerpiece that is thought to bring both progress and prosperity.

In both Sweden and Finland, this dessert is served with an almond hidden in the mix. Whoever finds the almond is guaranteed a lucky New Year — and they sometimes even get a prize.

In the southern United States, corn bread is a traditional, comforting dish that is believed to bring prosperity in the coming year, since yellow corn kernels look like gold.

This Mexican New Year dessert is usually consumed a few days after the first day of January, on Three Kings Day, January 6. Similar to other New Year's Eve traditions, a trinket is hidden inside the cake (this time a figure of the baby Jesus), and whoever finds it is declared king for the day — or is given the responsibility of getting the cake for next year. They also have to host a tamale party on February 2, Candlemas.

These Japanese rice cakes are eaten on special occasions, and are most popular during the New Year. The sticky, flour-covered treats are eaten alone, covered in soybean powder, or drizzled with a mixture of soy sauce and sugar.

No matter what your culture or where you live, there is one New Year's tradition that seems constant all over the world: drinking. Whether you toast with champagne in New York, sip a small cup of sake in Japan, or down some Feuerzangenbowle in Germany, a tipsy start to the year is just the tradition to bring in good cheer, and hopes for a brilliant year to come.

More like this
69 Great Gifts For Guys No Matter What Their Hobbies Are
By Teresa Newsome, Mia Mercado and Brittany Leitner
7 Joyful Alternatives To A Traditional Holiday Celebration
By Jessica Goodman
35 Genius Secret Santa Gifts For Someone You Don’t Know Very Well
By Rebecca Deczynski and Lauren Grant
35 Holiday Trivia Facts That Will Impress Your Guests This Year
By Lauren Grant and Emma Carey
Get Even More From Bustle — Sign Up For The Newsletter