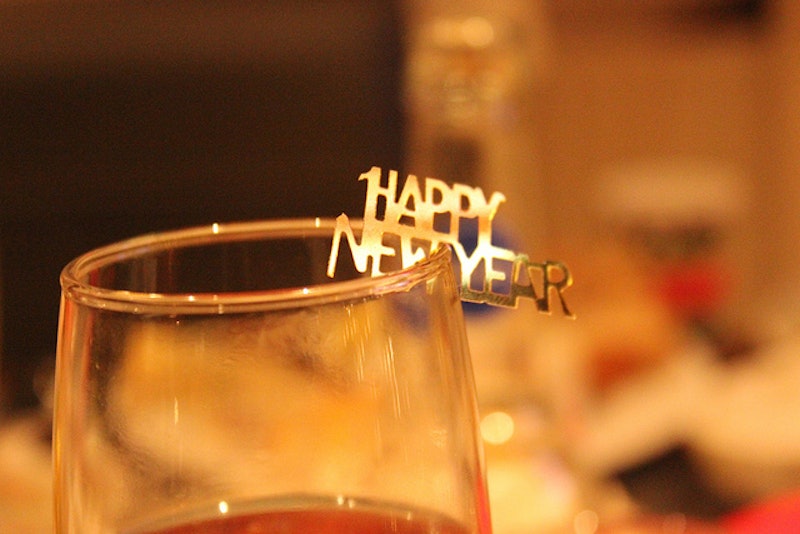 Oh, great. It's almost New Year's Eve again. Fantastic. Look, I understand that this holiday is an excuse to get cray, reminisce about the previous year, and set major goals for the next one, but... UGH. Why do we all feel the need to go out and get nuts all over the streets on this day? Other than the few days off from work, why have we turned New Year's Eve into a chaotic, commercialized circus? I know, Christmas is way more commercialized, but at least we can get drunk in our sweatpants and then open presents at the end of it all.

New Year's Eve party plans never live up to expectations, and you will wake up filled with regret and shame because day one of your motivational fresh start begins with a headache, nausea, and probably a bucket full of junk food to battle that hangover. If you're spending NYE in a low-key fashion with minimal humans and not-so-much booze, like this is any other day, then hooray! You've figured out how to avoid the madness, and you've already won 2015 as far as I'm concerned. Otherwise, let's get real about how disappointing this holiday usually is. Why do we set ourselves up for failure while spending all of our remaining money in the process? New Year's Eve is indeed, the WORST holiday to go out on, which is why we should all just stay in and watch Kathy Griffin and Anderson Cooper. Here are all the reasons to consider skipping the fancy NYE party and get nuts on your couch rocking your pajamas instead.

1. Because it's way overhyped.

Magical and unforgettable events will most likely not go down just as the ball is dropping. The party you attend will be meh, and at best, decent. This isn't the movies, y'all.

Much like the dreaded Valentine's Day, most bars and restaurants add a cover charge to a major menu mark-up because they know everyone wants to be out on NYE. Boycott this malarkey and eat your chosen takeout meal instead.

3. Because wherever you go, it'll be crowded.

Everyone is everywhere on NYE, so if you leave the house, you will be elbowing drunk fools wherever you end up. Umm... fun? Nope.

4. Because you probably have to squeeze into an LBD for the NYE party, after a month-long junk food binge.

Unless you choose to rock a trash bag at this party, which would be a really rad way to stick it to NYE, you will have to squeeze yourself into a hot dress for this. Normally, that would be a blast, but you've spent the last month inhaling sugar cookies, appetizers with salty deli meats, and chugging eggnog by the carton. This is really not the best time to put on a form-fitting ensemble. Your sweatpants would never make you feel this way. Choose the sweatpants.

5. Because after New Year's, the holiday season is officially over.

Christmas let-down is still very much a thing you're experiencing. And who could blame you? What's the next important celebratory holiday after this? Valentine's Day? Ew. St. Patrick's Day all the way in March? Yeah, that'll do. But it's so far away! Boo. Say your tearful goodbye to the holiday season in private.

What the F do they use for a head model when they make these? An oversized egg? They're always so tight behind the ears but also somehow loose on the top. And if they have an elastic band that goes under your chin? FORGET. IT.

7. Because Christmas is exhausting and NYE plans often happen at the last minute.

Nobody is ever in the mood to plan New Year's because they're too busy planning Christmas with family, friends, and coworkers. That leaves only a few days between the two holidays to plan a kick-ass celebration on a budget. Last-minute plans are a nightmare. Skip them ALL.

8. Because do you really want to kick off the first day of the new year hungover?

I mean, seriously. Can you picture yourself going for that first run of your new healthy lifestyle when it feels like your tongue is wearing a sweater? Might as well wait another day for your awesome new life to begin, right?

9. Because it's just another day.

Eleven other months end and the next ones begin without any hoopla. When it comes down to it, this is just another day. So if it doesn't turn out the way you planned (which it won't), no worries. It'll come and go and you'll be just fine. And if you stay home, you might have a little less to regret and a little more money in your pocket when the clock strikes midnight. That is never a bad thing.