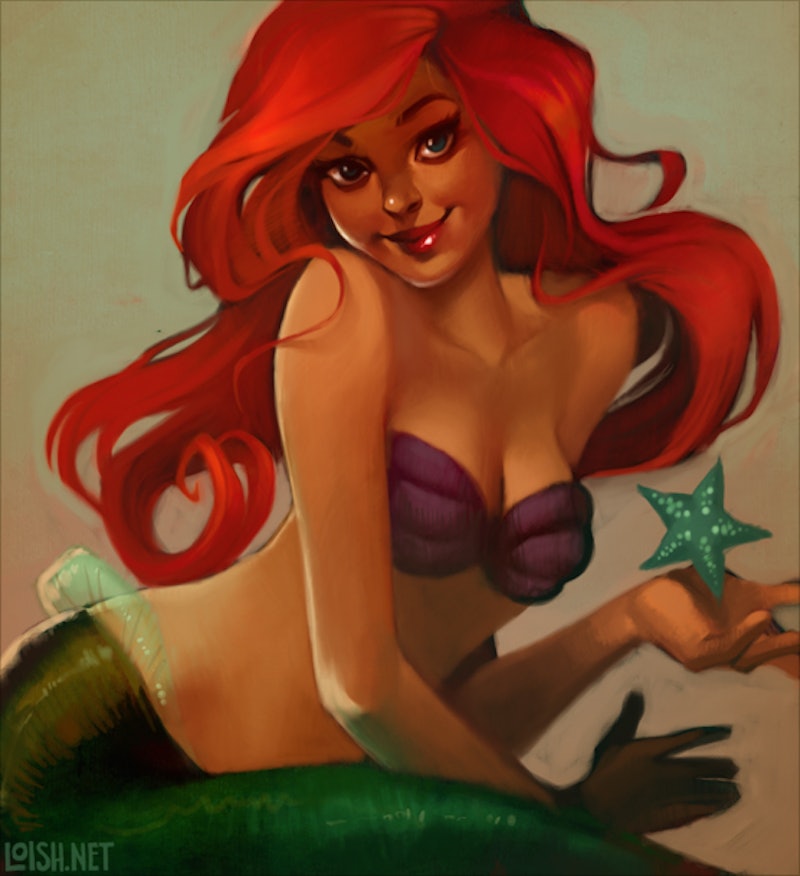 Back in November of 2014, The Little Mermaid celebrated a 25th birthday, so it's no surprise that most thirtysomethings of today have this film ingrained in their memories by this point. Personally, I had the movie on a VHS cassette and watched it 50 million times (I counted); so now I'd like to have a look at our love of mermaids and try to figure out why they are so close to our hearts. Was it somehow the popularity of this film 25 years ago that lead to the explosion of mermaid love this past year? You don't have to look far to see that mermaid themed accessories, jewelry and fashion are totally hip at the moment. And if you have an hour or two spare, I thoroughly advise browsing my Pinterest board of the most beautiful mermaid art on the internet.

Mermaids have been the inspiration of thousands of artists over the years (too many to mention, in fact), but one of my constant favorites from the last 10 years has been Dutch artist Lois van Baarle (Loish). Exploring her digital paintings is like floating though a dream world of of soft, wispy, swirling, colorful girls with big personalities. Bees, jellyfish, lollipops, flowers, long scarves, bubbles and stars add to the fascinating environment Loish has created for her strong ladies. The mermaids who swim from Loish's stylus have various characters and personalities; they range from the cute Disney Ariel to the sexy pinup to the dangerous lover of the sea. Loish describes her Ariel art as comfort art: The subject matter she goes back to time and time again if she's not feeling her best. She also mentions on her DeviantArt account that she receives daily requests to draw more because everyone loves the imagery so much.

My own personal mermaid obsession began 10 years ago, when I met a boy called Serge, whose greatest wish in life was to be a mermaid. He believed that he was a mermaid born into a man's body and spent his days running down hills really fast to experience the feeling of flying. I would have imagined that as a mermaid soul, you would wear the brightest shades of turquoise, purple and blue, but Serge the mermaid only ever wore black, grey and orange. I so admired his belief in himself and his inner mermaid that I made a painting of him.

My relationship with mermaids continued in 2010, when I was commissioned to paint a wall mural in Harbor City Antwerp on a building that housed a tavern called

Zeemeermin (Mermaid) in the Middle Ages. Designing the mural, it was a very easy and logical decision to paint a mermaid, but I wanted her to have a story of her own, so the painting also depicts her octopus lover and their little baby.

The message at the heart of this painting is love and embracing it wherever it shows up.

It is the largest work I have ever done and it was not without a dramatic story of its own. My darling mermaid, in fact, had a traumatic birth. Due to the huge size of the piece, I could not work on it at home. So it was kept in a vintage car garage owned by a well-meaning but somewhat delusional vintage man. I painted my splendid magenta octopus so that the paint dripped down the work to give a feeling of floating or dreaminess — to make the octopus love extend further than the tentacles and fill the whole space. Despite explaining this idea to Mr. Vintage, he didn't seem to agree, and a couple of weeks later I returned from a vacation to discover that he had painted over the parts he didn't like. I swiftly arranged the relocation of the painting, restored and completed it, and everyone lived happily ever after. Well, not quite: I did send an email to voice my shock and disappointment at what he did and his reply was as follows:

It was normal for Rubens to have helpers paint the base so I do not see why it would worry YOU!

I never realized that one word in capital letters could hurt my feelings so much. Even now, I get that sinking feeling in my heart when I read those disrespectful and degrading words. I know that my internalization of negativity coming from other people is something I need to learn to fight against if I want to survive in the big bad world. I should try to memorize some tips to feel more confident and put more effort into rising above the trolling that comes my way.

But let's get back to our fishy friends... There have been many different types of dramatic ladies from the sea, some more fishy than others. The stories surrounding these women are more often than not very tragic and heartbreaking. So maybe it is this that draws us to them, rather than pure aesthetics? In any case, let us briefly delve into the variety of representations of mer-women in history:

One of the first mermaids in ancient cultures was Atargatis from Turkey (700-1000 B.C.) who accidentally killed a shepherd whom she had fallen in love with. Disgusted by what she had done, she jumped into a lake to turn herself into a fish (all totally normal), but she was too beautiful for the water to completely change her — so she ended up half fish and half human. Sounds logical to me!

Having grown up with Disney's The Little Mermaid film on repeat, Ariel is my most well known and beloved mermaid. However, the vote is still out on whether the film is a horrific sexist disaster or a girl power feminist film.

These ladies are the femme fatales of the sea (Ancient Greece). It is believed they lured sailors to their deaths using sweet music and their seductive voices. To be honest, I always thought they were a type of mermaid, but upon closer inspection, they do not have a fish tail, but a set of wings. And they were sometimes depicted as having other bird-like features such as a beak or scaly feet. They are known as heartbreakers, killers and lovers who make men fall in love with them, and their stories never had a happy ending. Much like the mermaid love song by Belgian all-female group Nele Needs a Holiday, where the naughty mer-lady Nele steals your boyfriend and lures him with her spellbinding music. I'll try not to give away the ending, but I feel I should warn you: If fish soup is on the menu today you might want to look away now.

These little cuties swim around in the sea in the form of a seal, and then shed their skin and become human when on land. They need to take care of their seal skin because if someone hides it, they then have to marry that person and can never return to the sea. If they have a human husband, find their skin, and then return to the sea, they may not see that man again for seven years. Seems like a lot of rules for a seal! They come from Irish, Scottish and Icelandic folklore, and appear in both male and female form. The male Selkies are known to be very seductive, and they generally hit on vulnerable, lonely women such as fisherman's wives. Sound charming right?

In 2009, Colin Farrell starred in the film Ondine, in which he finds a Selkie woman in his fisherman net (as you do). However, the next Selkie film on my watch-list is the Song of the Sea — a wonderfully pretty animated film featuring the dreamy voice of Lisa Hannigan. Now that I think about it, with her sweet, seductive voice, Hannigan would make an excellent Siren!

We've all heard of the ballet Swan Lake, but there are many more stories featuring ladies who turn into swans. The guidelines for Swan Maidens seem pretty similar to that of the Selkies: They too must marry the man who steals their feather cloak. And if they ever find the cloak, they must leave and never come back.

So ends another tragic wild lady/animal story, and what have we learned from all this? Are mermaids a representation of the hardships and struggles of women? Are they the embodiment of behaviors that are perceived inappropriate in women? Are we attracted to them because they are free from the shackles of how people think you should behave? I guess this is not really a concrete conclusion, but rather a huge question mark.

Mermaids have always been mysterious creatures, but one thing we can be sure of is that they are beautiful. Even though they don't wear any clothes (with the exception of a shell or two), they have made a fashion contribution that cannot go unmentioned: The fabulous mermaid silhouette gown. I love this super glamorous shape, which is funny because my other favorite dress shape, the Empire Waist, flairs out under the bust in the complete opposite to this style. The mermaid shape flares dramatically at or below the knee, which I can imagine makes it just a little bit difficult to walk. But we will do it anyway, in ode to the mermaid ladies swimming in our seas: Ladies who teach us about love and empowerment and beauty and fantasy.