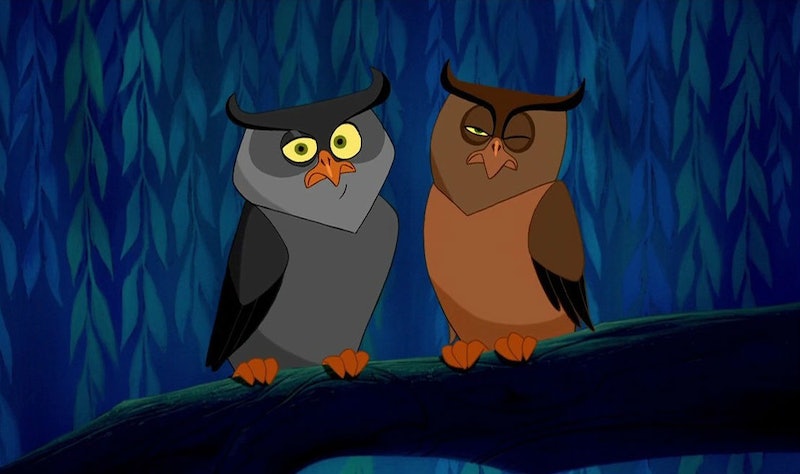 Night owls are the best people. They (we) just are — but that doesn't mean there aren't ways for night owls to improve in 2015. Unlike those irritating early birds who we know we're honestly a little envious of, we have the ability to wake up without that unfathomable energy and those creepily bright eyes. HOW do they do it? What kind of sorcery are they practicing to be able to get up as the sun is rising and just vomit positive affirmations all over the world like Chris Traeger clones? I mean, I do admire the strength it must take to turn off the alarm clock and not hit the snooze, and to not set multiple backup alarms just in case the first one doesn't take. That must be nice. Their internal clocks have never failed them because they are conditioned to get to bed at a reasonable hour.

Night owls, on the other hand, come alive in the darkness. We thrive on the lack of sunshine, and we feel at our best and most productive when the early birds are climbing into bed for the night. The life of a night owl can be a little bit odd though, since we sort of go against the grain of normal societal schedules. And if you're a night owl who lives with an early bird, things can get tricky. So this is for you, fellow night owls. Let's use our moon-induced energy to become our best selves in 2015. Here are all the resolutions we can make together.

1. Go to bed before the sun comes up

This is important because when we're on a roll, it can be hard to stop. But we need to remember that we aren't nocturnal, and unless we work in overnight shifts regularly, being up all night only to sleep all day is sort of an undesirable road to go down.

This can be tough, since breakfast for night owls doesn't typically take place until most people are starting to think about lunch. But it's crucial to adjust accordingly so that we're eating as healthy as possible at a normal human frequency.

If bedtime isn't usually until 2 a.m., then dinner at 10 p.m. isn't all that crazy. But any later than that and you could be messing with your ability to fall asleep at all. Or worse, you're late-night snacking on junk that could give you insane dreams, disruptive sleep patterns, or weight gain over time. And all of those things are a major bummer.

4. Get some new night owl attire

Whatever you like to do at night when you're most alert, celebrate it with some new duds. Whether it's cozy pjs, jeans that fit your bod like a glove, or a hot new dress, just Treat Yo Self. You've had a good year, and 2015 is about to be even better, so you deserve it.

5. Go check out the stars

Early birds marvel at the sun... right? I can't be certain since I'm never up that early to witness their behavior. Well, we like the dark sky, so we might as well take some time this year and soak up the beauty that lies above. The stars, the moon, even the evening clouds are all nice to look at, and none of them cause skin cancer. Not yet anyway.

6. Take advantage of that late night surge of energy

Instead of getting super fired up about the Real Housewives reunion that just aired and crafting some intense tweets to support whichever rich lady you like best, make sure the time that you feel most alive is spent wisely. Go work out. Work on that novel. Do some work to get you ready for the following day. Maybe cook something. Whatever you like to do best, or need to do for your job, this is the time to get it done.

A little "you" time is key to general happiness, so whenever you decide to call it a night, read a few chapters of a book first. It's a nice way to begin the process of mentally shutting down.

Reading isn't the only way to do it. Drink some calming tea, do some light yoga, or even just relaxing breathing exercises. It can only help your REMs.

9. And get enough sleep

It's recommended by most science and medical folks to get seven or eight hours each night. Some people can feel perfectly refreshed after five or six. Some require at least nine. Whatever works best for you is what is going to stick, so make sleep a priority, even if it doesn't start until dawn.