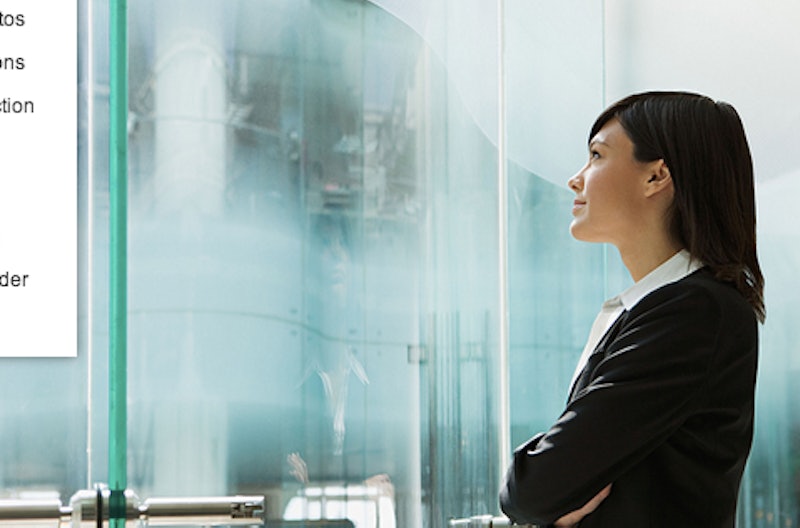 In our society, we tend to think about single, childfree women over a certain age in one of two ways. They're the hopeless spinsters — socially-awkward or overly-demanding outcasts who have 'failed' at snagging a man. Or they're high-powered career women whose current status reflects a life devoted to deadlines, paychecks, and climbing the proverbial corporate ladder.

In an essay on Thought Catalog, however, writer Katie Devine presents a third-option: She is someone who neither rejects marriage and children nor seeks them desperately; someone who enjoys and appreciates her career but doesn't worship it. It's a good piece because it rings so very true. Most of my unmarried, childfree friends in their late twenties and thirties sound a lot like Devine — happy with their current lives and ambivalent about not following the standard cultural script. Into their careers, but not all-consumed by them.

Devine starts her piece with a confession: "I am 35 and not married and I don’t have kids and I’m not a publisher and I don’t own a big house or a car and I’m not where I always thought I would be at 35." She writes of the "lines" she's grown accustomed to giving as explanations — how she's just not ready, how she can't keep a plant alive, how she wants to be able to hop a plan to Asia whenever she wants. "I say them so frequently that I barely even know what they mean anymore," Devine writes.

But somehow, this week, I actually heard what I was saying. Maybe because I was talking to a male friend and I didn’t feel any pressure, or competition, or hint of pity from him. Possibly it was because it felt like a milestone birthday. Or perhaps I just got it for the first time.

I really meant those lines. I am not ready to have children. I kill every plant I’ve ever had. I do want to just get on a plane and go. It’s all really, really true.

[...] It’s like waking up and finding that the pair of shoes you had been lusting over for months actually pinch your toes and don’t look good on you because they are so not your style. But you wanted them because everyone else wanted them so they must be special and so you just had to have them.

Her takeaway is that "we’re not stuck with this dream that was formed at age 11, or at 25," that we can re-write, "go back and choose a different path, like in those Choose-Your-Own-Adventure books." This is a smart thing to keep in mind whether you're 25, 35 or 55. "Life is too short" is a cliche, so let's use youth instead; youth is too short too be wasted on lamenting what hasn't happened yet.

Confession: I am 31 and not married and I don’t have kids. A few years ago, I fell in love with a man I thought I'd marry, moved to Indiana with him and only recently (after several break-ups and make-ups and moving outs and moving backs) realized it wouldn't work out. Many of my friends have recently begun starting families, but many other friends (men and women) are still unmarried without children. Some are single, most are living with significant others. Some have had engagements fall through. A few have already been married and divorced.

The thing all of us have in common is that we have nothing in common with the stereotypes about us. We're not incapable of committed relationships, we've just had some failed ones. We're not rejecting marriage and children, per se, we just haven't found ourselves in the right circumstances yet. We're not happy about it, and we're not unhappy about it — it just is. We'll keep trying to find the right person to 'settle down' with, just like we'll keep trying to find the right jobs, get those promotions, move to the right cities and do any number of things that may bring future happiness. And if it doesn't work? That's okay. And in the mean time? Present happiness will do.

As Devine concludes with a second confession: "I am 35. I am successful. I am following my passions. I am an intrepid traveler. I am a writer. I am happy. I’ll choose that ending for today."