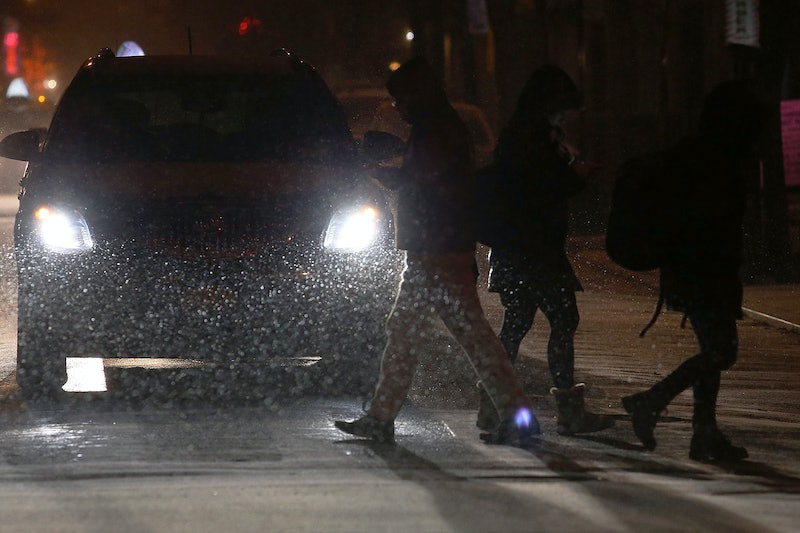 Anybody else see that kinda creepy anti-drunk driving commercial with police officers camouflaged into walls? Even if you haven't, everybody’s aware of the dangers of drinking and driving, but we’re somehow uninformed about the dangers of drinking and walking. According to a study by the Insurance Institute for Highway Safety that observed traffic collisions between 1986 and 2002, New Year’s Day is the deadliest day to pedestrians, especially if they've been drinking. From the results of the study: “January 1 (New Year’s Day) has more pedestrian crash deaths on average, plus it has the fifth largest number of deaths per day overall, also due to alcohol impairment.”

After Maddie Oatman of Mother Jones asked the IIHS to look at data from the National Safety Administration between 2008 and 2012, they found that New Year's Day was still a danger to drunk pedestrians. As Oatman stated:

Drunk walkers, while they’re less likely to harm others than drunk drivers, are still a huge danger to themselves. Their impaired judgment makes them more likely to make risky decisions when it comes to navigating the streets home after a celebration. As Elizabeth Kovac, the Director at of the Alcohol Research Program at Loyola University’s Strich School of Medicine, explained to Oatman, alcohol not only impairs your cognitive judgement, but also inhibits your body’s ability to heal from wounds.

So while you know the tips to avoid drinking and driving (have a designated driver, use public transportation or split a cab or ride sharing tool) here are some helpful tips for the walk home on New Years Day. These tips from trauma surgeon Dr. Thomas Esposito at Loyola University Health System can help insure that you make it home safely.

Wear bright clothes that will make it easier for you to be seen at night. So basically, YES to the sequined New Years dress you were thinking of.

2. Stay out of the streets.

Stick to the sidewalks and please don't try to pull that laying in the middle of the road thing from The Notebook.

Walk with a group of friends and make sure at least one person in the group is sober enough to keep you all from making foolish decisions. Yes, that's right, you need a designated walker, too.

For drivers, take extra precaution when driving through restaurant and bar areas.

For hosts, be just as aware of your friend who plans to walk home as the friend who may plan to drive home. Ultimately, be prepared to let people sleep over if they aren’t up for the drive or the walk back.

More like this
Why Experts Say Sleeping With A Fan On Isn’t Totally Risk-Free
By Sophie McEvoy
The 8 Best Chew Bones For Puppies, According To A Vet
By Andrea Hannah
The 5 Best Sand Flea Repellents For Bite-Free Living
By Elizabeth Enochs
25 Things I've Reduced My Life To, In Addition To WFH In My PJs
By Ginny Hogan
Get Even More From Bustle — Sign Up For The Newsletter