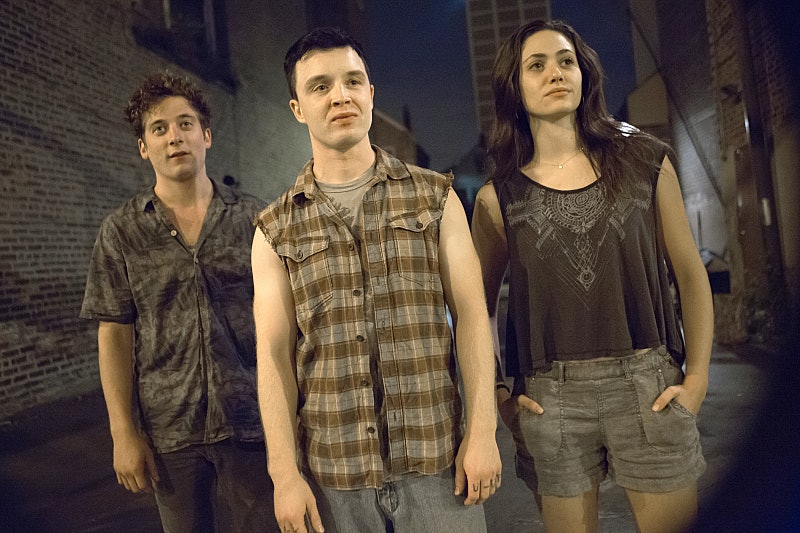 Let's all rejoice, because the Gallaghers are coming back. It's been a long time, hasn't it? That's the problem with these high-falutin' super-duper high quality, excellently well-written cable dramas: They stop our hearts with their 12-episodes seasons, then leave us out to dry for a good nine-odd months (heck, that's enough time to gestate a baby, speaking of which, let's hope that none of the Gallaghers or Gallaghers' girlfriends did). Anyway, let's talk anticipation, because oh man, there are so many Shameless Season 5 spoilers out there getting me all excited for the premiere.

The Shameless Season 4 finale left us on quite a high note on the quality spectrum and low one on the character end of things. As you might expect, things aren't exactly coming up roses for the Gallagher clan; William H. Macy said it best in a recent promo: "It was hopeful, but it was a rough season on the Gallaghers."

And because I'm impatient, I dug up some spoilery teasers about what we're going to see in Season 5:

One thing I love about Shameless is its ability to regenerate itself; it's constantly in flux, and over four seasons, it very rarely felt stale or tired. Case in point: Frank has now done just about every horrible alcoholic thing he could do, so much so that he had cirrhosis of the liver, so what do they do with him now? They make him get sober! Don't worry, though: According to Macy in the above video, "he's still a rascal, and he's got a voracious appetite for adventure."

According to The Hollywood Reporter, their relationship will be rife with flirtations and tension. He may have been the ultra creep in August: Osage County (which was also directed by Shameless showrunner John Wells), but did you see him as Russell on New Girl? Good on you, Fiona. Good on you.

3. We'll Finally Find Out What Happened to Jimmy/Steve

Sounds like Fiona's love life will be quite tumultuous this season (though, please please don't let it be as tumultuous as last season): TV Guide reports that she'll be juggling Dermot Mulroney along with Jimmy/Steve and a couple of rock 'n roll musicians. While I'm firmly in the "Jimmy/Steve should have stayed dead" camp, I am curious to see how he pulled it all off.

Remember the mysterious lady in Steve's car/Skye's mother on Agents of S.H.I.E.L.D./Sierra from Dollhouse? A new synopsis from the International Business Times says she's going to show up at Fiona's new place of work to stir up trouble.

We recently found out that Emily Bergl was promoted to series regular — so buckle up for some seriously wild Sammi story arcs.

6. We'll Get to See Steve Be a Stay-at-Home Dad

According to the International Business Times, he'll be taking care of the triplets, while Vee takes over at the Alibi Room.

Because of course Lip's jumping in the sack with a professor (which we know thanks to the actor's interview over at EW). I'll miss Amanda, but this should be fun, eh?

Well, it looks like it definitely won't be smooth sailing for Shameless' favorite ship: According (once again) to TV Guide, "his erratic behavior and escalating promiscuity will jeopardize his romance with gangster Mickey" (NOOOO!). That said, I think they'll pull through in the end.

9. Sheila and Frank are Back Together?

From the promos, it looks like Frank and Sheila will be getting back together — which makes sense, because they are technically married now. I'm not necessarily happy that they're reuniting (personally, I'd rather Sheila get back with Jody), but I am hoping this means Sheila will be getting more screen time this season — last year, she was kind of sidelined. Here's to more Sheila in 2015!

So there you have it — all the juicy spoilers I could find for Season 5. Is it premiere time yet?