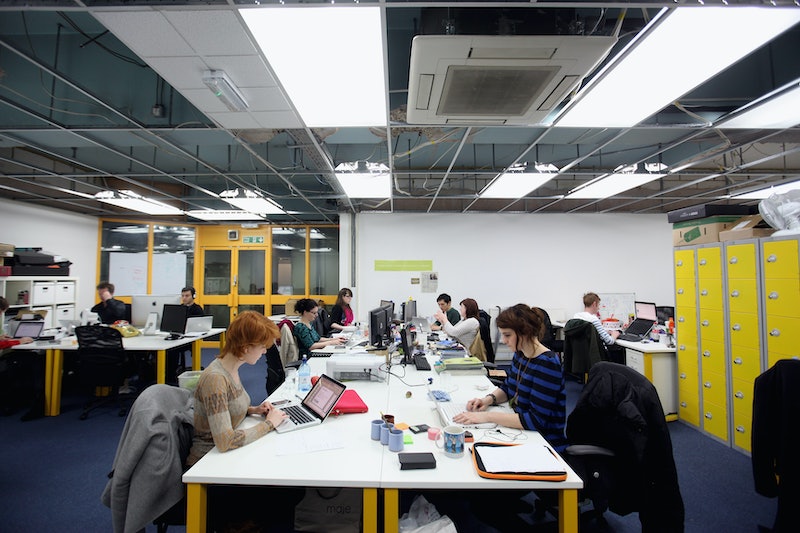 Open office floor plans have been gaining popularity in recent years, and now (predictably because this is what we do here on the internet) people are starting to doubt whether open office spaces are actually a good thing at all. As someone who has worked both in offices with more traditional space appointments—lots of private offices and conference rooms, walls made of actual...wall, instead of glass, etc.—and in open office spaces, I can see how someone would favor either. Personally, I hate both equally since you typically have to wear pants and shoes in either case.

But it's true that working in an office that has an open floor plan and co-working spaces means that there will unavoidably be some distinct benefits and challenges involved in your work day that people in traditional offices don't encounter. The way you work and interact with your co-workers is entirely different from the way you might if you weren't all sharing so much physical space, and as a result, both your work habits and the dynamics of your relationships with the other people in your office end up looking markedly different. I disagree, however, with the idea that we should be comparing these two workspace structures as an "either/or" thing; Open offices are different for better and for worse. Here's how:

You will trip in front of everyone

Over your own feet, or a rug, or that weird bump in the reclaimed wood floors, while on your way back from the bathroom. It will be around 11:15AM when the entire office is both packed and silent, two things which occur simultaneously for only a grant total of 20 minutes per week, and which, when combined, maximize your humiliation potential when you inevitable trip over your own goddamn feet. In a more traditional, partitioned office space, you could trip and be seen by no one, or maybe just a few people. But in an open office? Nope, nothing but wide open expanses wherein your awkwardness will echo for all to hear.

You will become deeply dependent on GChat

A lack of private rooms and sound-sheilding walls mean that you can't really speak audibly about things you don't want everyone else to hear. Whether it's random gossip about what something that happened to you last weekend, or strategizing on a project you're not ready for everyone to know about just yet, you can be certain that every office with an open floor plan is only quiet on the surface—there are endless side conversations happening online.

That struggle is so real.

Your work BFF is right there!

So close! Much work friendship!

You've tried, but you just cannot.

And also so is your work crush's face

What even is your job? How are you expected to concentrate under these conditions?!

You become surprisingly comfortable with your coworkers

Ain't nobody got time to be running off to the bathroom every time you feel a tiny zit that needs to be popped immediately. Maybe at first you'll excuse yourself from the communal work area to tend to various grooming needs, but eventually, you just start busting out a mirror right there on the desk in front of everyone. Which doesn't matter because...

You get really good at ignoring everyone around you

There are definitely times when working in a space where you have unfettered proximity to your co-workers is awesome; you're able to easily bounce ideas off of them, collectively brainstorm, ask about lunch plans, etc. But there are also times when you need to turn off the outside world and go deep into your own work zone. In the absence of your own physical space within which to hide, you develop your own strategies for shutting out your co-workers, usually involving a potent combination of coffee and headphones blasting whatever music gets you there. Deskmate pulling out a mirror to pluck a random hair that apparently can't wait to be dealt with? You're so good at detaching from your environment at this point that she could literally be shaving her legs on the table and you wouldn't notice.

You'll get distracted by other people's food

What is that smell? That smells amazing, I need to find it. Whose donut is that? Did someone say they were ordering takeout? What is that thing you're eating right now?

You might come to work armed with a sensible lunch that you brought with you in a commendable attempt at being healthy and financially responsible, and you might plan to reach certain benchmarks in your workday before you reward yourself with a well-earned break to eat it, but all of those plans will be frequently ripped apart by the sensory influence of your co-workers' consumption. What kind of will power test is this open office nonsense? People need walls to protect themselves from the distracting smell of Someone Else's Chipotle.

You will get to know your co-workers really well

Who someone really is will rarely be revealed when your contact with them is limited to meetings and other planned interactions. You truly see who someone is via the little side comments they make, or the YouTube videos they watch, or how many text messages they get during the day. Everyone's interactions are far less controlled (and thus their work personas are far less intentional) when you're all just hanging out in the same big space all day.

Friday afternoons can turn into a legitimate party with alarming ease

When you're all already in a big room together, literally all you have to do is stop looking at your computers and add alcohol and suddenly you're at an actual party. This is easily the greatest strength of the open office and also its greatest liability.

And ruin everyone's life for 10 minutes.

Wait, was that question directed at me? It seemed like a general query directed at no one specifically...do you want my input? Am I a part of this conversation or should I keep working quietly, or will that make me look like not a team player, or would inserting myself here make me look like a self-important know-it-all? Is everyone now GChatting about what a standoffish weirdo/arrogant busybody I am?