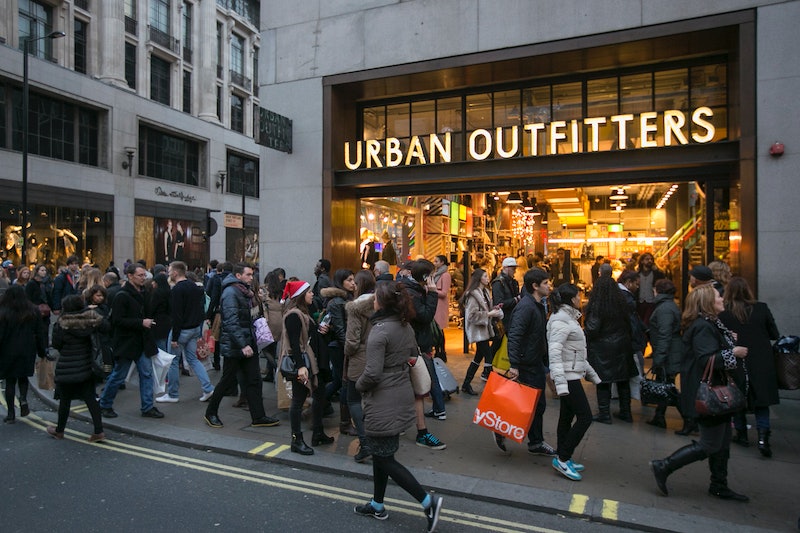 Oh, Urban Outfitters, why do you make things so hard on yourself? If the first thing that goes through your mind when you see Urban Outfitters-related articles pop up in your news feed is, "Oh no, who did they offend now?" then you wouldn't exactly be alone. The brand has an incredible range of products worldwide, and has a tendency to, well, ignore political correctness as a whole. So who exactly did UO offend this week? The British Advertising Standards Authority (or ASA) , apparently. Recently, the ASA banned an Urban Outfitters underwear photo from websites in the UK, after they received complaints about the model with an extreme, "unhealthily thin" thigh gap.

In case you're wondering, the underwear in the photos are named "Polka Dot Mesh Briefs in Fig" and are still available (and accompanied by the same photos in question) on Urban Outfitter's UK website, despite ASA's ruling that the photos should be removed. As Daily Mail reported, ASA stated that the ads were "irresponsible."

"We considered that the model was very thin, and noted, in particular, that there was a significant gap between the model's thighs, and that her thighs and knees were a similar width. We understood that Urban Outfitters' target market was young people and considered that using a noticeably underweight model was likely to impress upon that audience that the image was representative of the people who might wear Urban Outfitters' clothing, and as being something to aspire to. We therefore concluded that the ad was irresponsible."

Yes, it's refreshing and impressive that ASA took a stand to make sure these type of photos are not being promoted and advertised to young people who could be affected by the images. But my first thought about the whole debacle—how are these photos any different than most other underwear/bathing suit/clothing models/advertisements on other websites? Sure, the models are thin — unhealthily so, it could definitely be argued. However, I would guess that if anyone searched major retail sites, they would be able to find almost identical photos featuring very similar models. Does this make the photos acceptable? Of course not, but one has to wonder if Urban Outfitters is simply being put under an extra critical microscope due to some of their past transgressions.

More like this
The Most Gorgeous Plus-Size Looks From The Met Gala
By Dominique Norman
What’s The Kibbe Body Type Test That’s All Over TikTok?
By Marilyn La Jeunesse
Machine Gun Kelly Wore A $30K Diamond Mani To The BBMAs
By Paris Giles
How To Master Baby Braids, According To TikTok
By Tomi Otekunrin
Get Even More From Bustle — Sign Up For The Newsletter