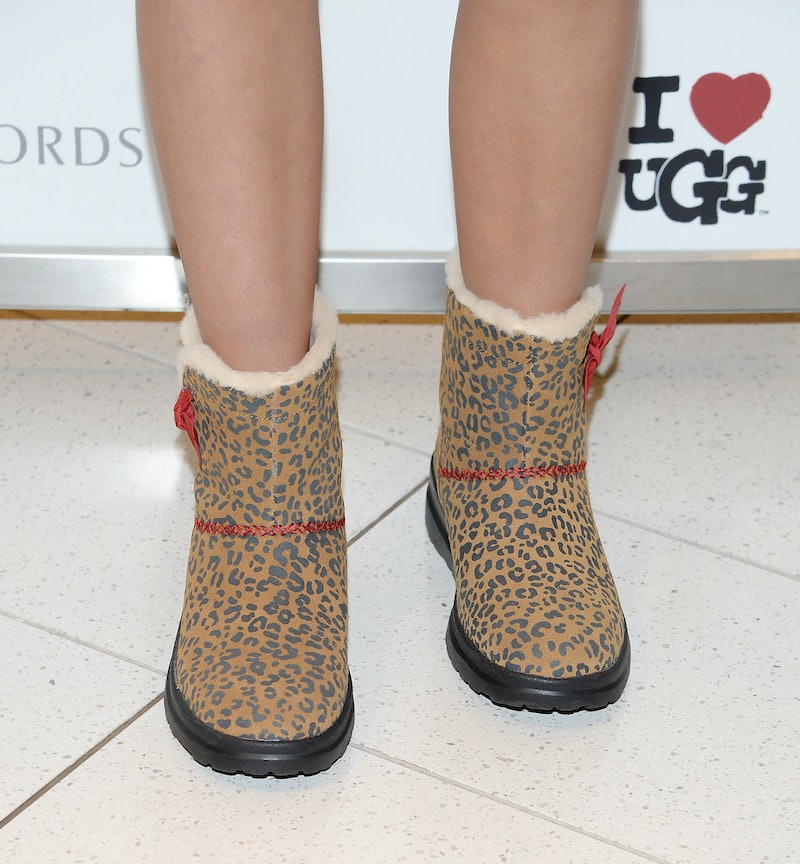 I'm not one for policing what women can and cannot do, nor what they should or should not wear. That said, I am a human being with eyes and opinions and common sense, so naturally, sometimes I find certain styles of clothing to be truly abhorrent. There are not many sartorial choices that really make me mad, but when I see fully grown-up women wearing undeniably dumb things, I feel like not only have they offended me by wearing said things, but they've offended themselves. Obviously, this is a subjective call, although I feel like you're going to agree with my loathing of at least three of the following should-be-banned items if you're any kind of rational person. I'm not just being mean for the sake of being mean; I'm being mean for the greater good, and so we can put an end to grown women who still dress like "manic pixie dream girls", or "socially unaware teenagers", or "people who are still asleep but somehow stumbled into public." We're all going to do better than that in 2015!

Being a grown woman is about doing as you please—but also doing what serves you best. Having self-respect means staying true to who you are, and letting that be reflected in your clothes, but it also means striving for "who you are" to be someone who is practical and effectual, both in her wardrobe and in life. The rules aren't hard: Try not to wear anything too undeniably ugly, at least not in public, where people are trying to decide whether to, you know, hire you for an awesome job or something. Don't wear other people's cultures as costume or fashion statement. Dress for the environment that you're in. Don't spend too much money on something trendy, because trends are mostly dumb and fleeting, but money spent is gone for good. Be yourself. But most importantly, don't ever be seen in the four things listed below.

I know a lot of you are going to hate this edict, but I'm throwing it out there regardless: Knee-high boots are done. They need to be completely done forever. OK, we can keep rain boots. But that's it. Unless you're Rihanna, lose any boots that are knee height. They make you look like you forgot it wasn't 2001 any more. Moreover, if you're less than six feet tall, they cut your legs in half and make you look weird and stumpy. I have a massive aversion to knee high boots. They're one of those bygone trends that make wearers look like they don't know what current trends are. Boho is now a no-no. If you're happy with all that, then by all means, carry on.

I'm not saying not to go to festivals, nor am I saying that wearing clothes that show a lot of skin in a practical attempt to not get heat stroke is a bad thing. But grown women wear their regular clothes to festivals. They do not have festival specific Daisy Dukes and offensive, feathered Native American headdresses. You're too smart for that kind of crap now. I mean, look at this idiot (above). You're judging her, right? (Hopefully, she's judged herself too. We all have to learn the lessons sometimes.)

3. T-shirts With Slogans On Them

You are not a "Boss Bitch". I mean, maybe you are. I hope you are! But wearing a shirt proclaiming kinda makes it automatically untrue, you know? You are also not an "Angel" [insert embossed wings here]. And you're certainly not any of those things when they're emblazoned across your chest in diamantes. Leave the glittery (often un-seamed for some reason) t-shirts with slogans on them, a-la Britney Spears circa 2000, with your 15-year-old, mall rat self.

The only excuse for Uggs is you're inside, it's cold, and no other humans can see you. This knowledge appears to be inherent to Australians only (home of the Ugg). Outside of the home, you should be ASHAMED to have Uggs on your feet. You deserve better. Your feet deserve better. Everyone looking at you DESERVES BETTER. You might think you're making some kind of glamor statement with Uggs, but you just look like a slovenly fool who paid too much for their slippers. (Ugg makes amaaaazing slippers, by the way. They are the house shoes of everyone's dreams—just don't wear them outside.)

More like this
Meghan Markle’s Favourite Skincare Brand Has Finally Landed In The UK
By Tomi Otekunrin
How To Master Baby Braids, According To TikTok
By Tomi Otekunrin
What Is “Jello Skin”? The Latest Viral Trend To Know About
By Tomi Otekunrin
'The Circle' Season 4 Star Yu Ling Wu Is Already A Beauty Icon
By Erin Stovall
Get Even More From Bustle — Sign Up For The Newsletter