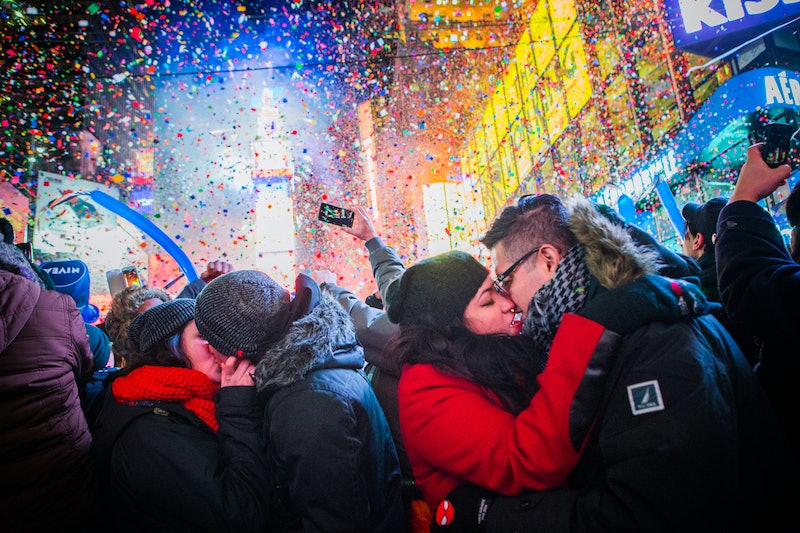 Can you believe it’s already December 31? The fact that tomorrow will be 2015 sounds like crazy talk to me, but, well… my calendar doesn’t lie. In case you’ve ever been curious about which countries tend to stay up the latest on New Year’s Eve, though, you’re in luck: Sleep tracking app UP by Jawbone has you covered with their latest bit of data analysis.

With hundreds of thousands of users, UP has a huge sample of data at its disposal; as such, it’s not terribly surprising that they frequently crunch a few numbers in order to find out what sorts of trends we have going on in the world. This time, principal Jawbone scientist Brian Wilt (whose bio describes his job as “[making] data human,” which I love) has given us a lovely little snapshot of what people’s sleep habits looked like last New Year’s Eve; in theory, this should allow us to predict when we’re all likely to go to bed this year, too. Makes sense, right?

Fun fact: The United States doesn’t party nearly as hard on NYE as a lot of other countries do. Almost 30 percent of Americans will be asleep before midnight even arrives — a percentage I will join this year, as I am working (by choice, at least!) on January 1 — and in Pasadena, California in particular, the number jumps to a whopping 47.9 percent. I would imagine this has something to do with the Rose Parade and the Rose Bowl occurring bright and early on the First. But you know what? I’m don’t feel even the tiniest bit bad about the fact that I will be spending New Year’s Eve in my pajamas. That’s the best night ever, as far as I’m concerned.

Here’s a selection of the bedtimes I found to be the most interesting, arranged in order from those who stay up the latest to those who go to bed the earliest; head on over to Jawbone’s blog for the full report:

According to Jawbone’s data, Russia has an average bedtime of 3:36 in the morning on New Year’s Eve (or, by that point, New Year’s Day); 95.4 percent of its citizens are typically awake at midnight. The top two cities with the latest bedtimes are also Russian ones: Moscow (3:4 AM) and St. Petersburg (3:35 AM). This might have something to do with the fact that ringing in the new year is something of a “superholiday” for the country; Jawbone describes it as “like Christmas and New Year’s Eve combined,” with gift exchanges, visits from Santa Claus, tree decorating, and family party shenanigans all occurring on January 1.

Although Argentina tends to go to bed on NYE a few minutes earlier than Russia, a greater percentage of the country will likely be awake at midnight: 97.5 percent. Buenos Aires takes the number four spot on the “Cities with the Latest Bedtimes” list, clocking in (literally) at 3:09 AM.

94.2 percent of Brazilians will probably still be awake at midnight; on average, they’ll turn in around 2:36 AM. Interestingly, though, we don’t spot a city in Brazil on the latest bedtimes list until number 15: Folks living in Sao Paulo will finally hit the hay at 2:45 AM.

A lot of European countries — Sweden, the Netherlands, France, Austria, and so on — have similar New Year’s Eve habits to each other: They all tend to go to bed somewhere between 2:00 and 2:30 AM. Between 89 and about 95 percent of most countries will be awake at midnight. There’s one outlier, though: The UK. Most Brits are apparently asleep by 1:38 AM.

79.4 of Canadians will actually ring in the new year when the clock ticks over; then they’ll crash about an hour and a half later. Their cities don’t look like super hard partiers, as none of them appear on the list of “Cities with the Latest Bedtimes.”

If you manage to stay up past 1:00 AM on New Year’s Eve, congratulations! You party harder than the average American! Somewhat hilariously, the Astoria neighborhood in the New York borough of Queens is the only place to make the top 20 latest bedtimes list; at 2:38 AM, it takes the number 16 slot. New York does, however, take up four out of five slots on the “U.S. Cities with the Latest Bedtimes” list; Miami, Florida nabs the five spot.

Australians tend to get the most shut-eye of anyone in the world, so it’s perhaps not surprising that most of them will conk out a little bit before 1:00 AM. Only 69.9 percent of Australians will be awake at midnight, and none of the place’s cities cracked the top 20 for latest bedtimes.

China, it turns out, is pretty comparable to Australia: They’re awake until a little bit before 1:00 AM on average, and only 69.3 percent will likely still have their eyes open at midnight. None of the major cities made the top 20 latest bedtimes list, either. But then again, regular ol’ New Year’s Eve isn’t as important over there as the Chinese New Year is; on January 30, China will stay up until 1:02 AM.

More like this
What Is “Jello Skin”? The Latest Viral Trend To Know About
By Tomi Otekunrin
Here's Your Daily Horoscope For May 19, 2022
By Mecca Woods
Rihanna & A$AP Rocky’s Astrological Compatibility Proves They'll Be Amazing Parents
By Nina Kahn
The Sun Tarot Card Meaning, Explained
By Brittany Beringer
Get Even More From Bustle — Sign Up For The Newsletter