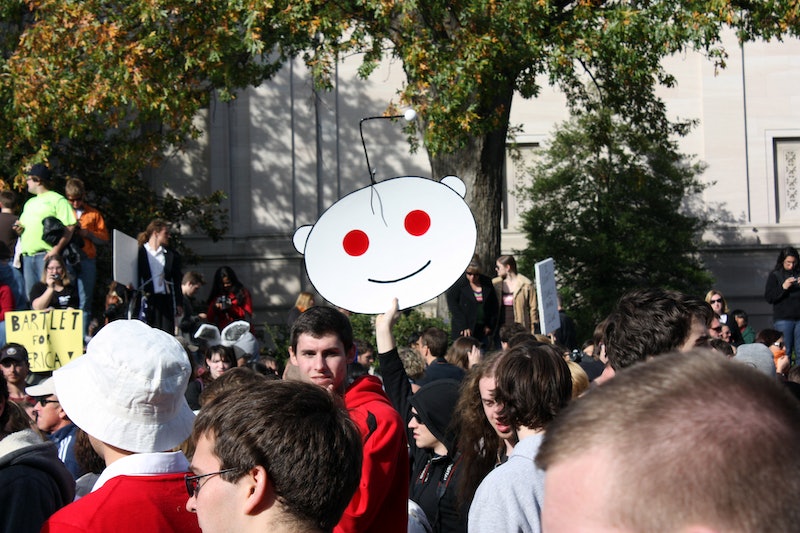 Three years ago, if you'd have said the word "Reddit" to me, I would have had no idea what you were talking about, but today, the self-described "Front Page of the Internet" is more popular than ever. And so it's worth taking stock of just what were the most popular Reddit stories of 2014. Spoiler alert: A lot of them are kind of...out there. It is Reddit, after all.

Though Reddit might be most famous this year as the site where the stolen celebrity nude pictures were first posted over the summer, most of its content isn't of a despicable sort — in fact Reddit even booted the photos off their site eventually, though their reasons were a little perplexing. Still, even though the site definitely does have more than its fair share of awful content, it also provides plenty of much more lighthearted posts, too, ranging from the thought-provoking to the useful to the hilarious to the just plain strange.

It is the "Front Page of the Internet" after all. If there is one thing we know about the Internet, it's that it is a very strange place.

So, without further ado, behold the most popular — or at least most upvoted — posts on Reddit from 2014 (at least as of press time on New Year's Eve).

The author of this post in the TIFU (Today I Fucked Up) subreddit was sending off his resume and not getting many responses — until someone pointed that he'd mistakenly posted a meme of an Ewok as his display photo. Oops! Well, at least he got over 12,500 upvotes.

9. Mopping Up the Rain

8. What Tasty Food Would Be Disgusting if Eaten Over Rice?

This question, posed in the Ask Reddit subreddit, drew a wide variety of responses. The most popular answer? Cereal. But overall, redditors seemed to really enjoy the question, upvoting it 13,300 times.

This story from a tech support person whose call from a cranky, elderly customer took an unexpected turn, touched quite a few heartstrings on Reddit and earned the poster over 13,700 upvotes.

These entries from an "IT person" who is actually a dog (and thus obviously has no idea what he's doing) are either hilarious or terrifying — bad IT service is no laughing matter guys. No laughing matter. My computer is my life. But whatever else they may be they're certainly popular — Redditors gave this post 14,000 upvotes.

This animated video of a delivery service in outer space is darkly hilarious and incredibly well done. It definitely deserved its 16,800 upvotes.

If there is anything that the citizens of the 21st century love, it is advice for how to get the most out of their Chipotle experience. So if you are someone who likes to take advantage of your power to ask for an extra scoop of chicken, take advice form this black bear/mem/Redditor about how to make sure they aren't cheating you out of valuable meat. Appreciative Redditors gave the post almost 18,000 upvotes.

Apparently Redditors love it when mods announce things — or at least announce the addition of a hitmarker for when users upvote or downvote something. In fact the love it to the tune of over 25,000 upvotes.

1. Carter and His Banana

And here you have it, the number one story posted on Reddit this year. The post is titled "This is Carter. He knocked on my door to ask if he could have a banana then left." And the picture pretty much says it all. Meanwhile, almost 30,000 Redditors said "upvote" and now Carter not only has a banana but is also an Internet star. good for you, Carter.