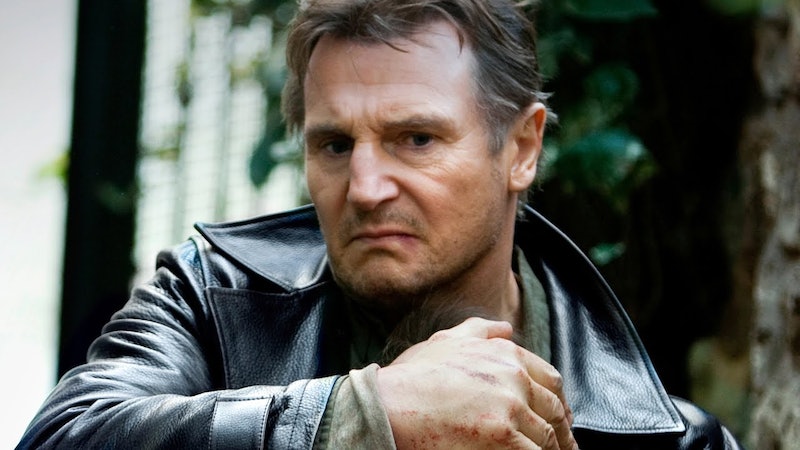 Whether you're willing to accept it or not, the release of Taken 3 is upon us. In less than two weeks, audiences everywhere will be treated to more of Liam Neeson's throaty, threatening phone conversations when he assumes the role of former government operative Bryan Mills. While promoting the film during an appearance on The Graham Norton Show, Neeson joked that Taken makes Americans afraid to travel overseas. The 62-year-old actor recalled two incidents in which fans claim to have canceled plans to go to Europe after having seen the movie.

"Just the other day I got a letter from a school teacher in Texas who had tried to take 60 students to Europe and the families of 40 of them got the kids out of it because they had seen Taken 2," Neeson said.

Besides, there are far more real-life concerns that I have after watching Taken. I think the franchise should’ve bowed out gracefully after the second film, but I’m considering watching the third (and hopefully final) installment, but I’m afraid it might cause me to expand this list of six things to fear after seeing Taken:

Seriously, it's time to stop. Dear producers, please let the takers run out of bright ideas before Taken 3 hits theaters in January. Thanks in advance.

Finding Out Your Dad is a Spy

This is what you do for a living, dad?! No wonder you're always complaining about your astronomical insurance premiums.

On The Other Hand, Not Having a Spy For a Dad

Because a spy dad could totally kick someone's butt on your behalf.

Making Too Many Enemies

Listen up, everyone. Be nice because it's way too difficult to keep your enemies close when you constantly lose count of how many there are.

Liam Neeson Not Winning an Oscar

Maybe Neeson's hoping his dedication to the Taken franchise will convince the Academy to create a new category for Best Lead Spy Role. If this doesn't happen soon, these Taken films could go on forever.

Walking Through a Doorway

The Mills can't walk through the door of their own home without a threat on their lives. This should've scared people everywhere into removing all the doors from their hinges a long time ago.

More like this
Don Crowder Successfully Defended Candy Montgomery, But His Story Ended In Tragedy
By Gretchen Smail
The 'Hocus Pocus' Sequel Finally Has A Release Date & It Makes Total Sense
By Shannon Barbour and Radhika Menon
Watch The Dramatic First Trailer For Netflix's Jennifer Lopez Documentary
By Alyssa Lapid
What Does Doctor Strange’s Third Eye Mean?
By Arya Roshanian
Get Even More From Bustle — Sign Up For The Newsletter