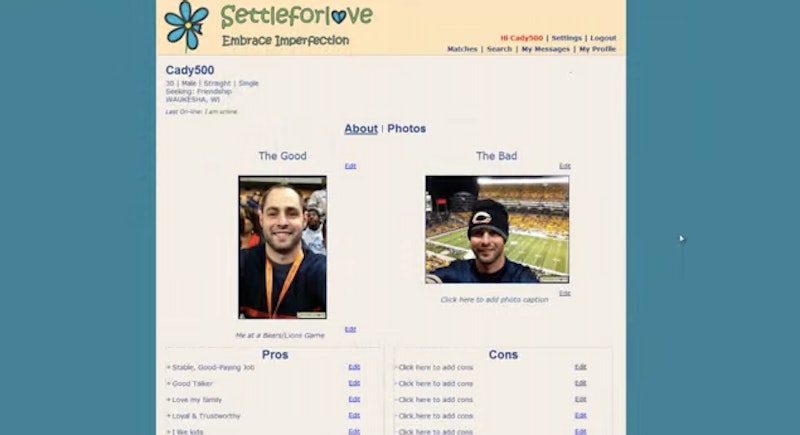 Dating is brutal and most of the time has the added pressure of trying to convince another human being to even like you, let alone be intimately involved with you. But for people who like to lay it all out there on the table up front, a new dating site called Settle For Love encourages you reveal your flaws rather than attempting to market yourself in the same way you might sell an app from a Silicon Valley think tank ("supportive, efficient, and engaging"). And shouldn’t everyone have a chance at meeting a complete stranger through online dating with whom they’ll ultimately build a life, regardless of a receding hairline?

The site was conceived after its founder, David Wheeler, expressed frustration with the misleading information provided in online dating profiles. “Dates were posting pictures from 10 years ago, hiding that they still lived with their parents, neglecting to mention they hate men, and the list goes on,” says the site’s Kickstarter. “It seemed traditional dating sites weren't encouraging users to do anything but sell themselves.”

Self-directed humor with a streak of deprecation can be incredibly attractive. The ability of a person to admit his or her own flaws and turn them into a semi-endearing personality traits is sexy in its own right. And that seems to be at least part of the idea behind Settle For Love. Mostly though, the website seemingly seeks to corral a pool of daters focused more heavily on the inside person than the outside one (queue the "awws"). As yet they’ve raised a mere $1,400 of their $45,000 goal with two days left to reach their fundraising goal. Check out their campaign video below.