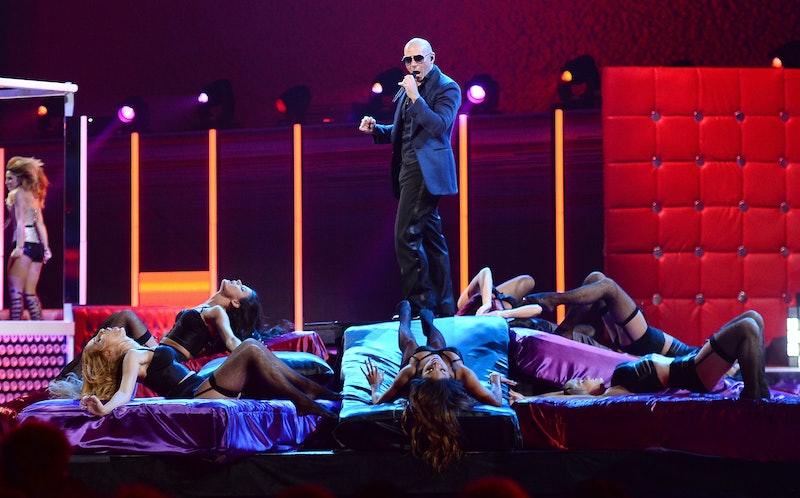 The Pitbull New Year's Revolution is already full of ridiculous moments and it's only just begun. Pitbull was given a key to Miami, guys are dancing for dates, cell phones are being abandoned — it's chaos. We were promised a revolution, and Fox has yet to deliver. Unless their idea of a revolution is drunk people break dancing on beaches. In that case, they've totally hit the nail on the head. To add to the chaos, a drink-mixing contest was added to really get the party started. Lamorne Morris from New Girl and Edward Weeks from The Mindy Project were on hand to mix up their favorite New Year concoction. This, in addition to the "Best Hangover Cure" segment is really turning the show into a total boozefest. And it's definitely wearing on Pitbull.

After sipping each mixologists cocktail, Mr. Worldwide slipped on stage on his way to the stairs. His catlike (doglike?) reflexes help him bounce right up, though — no doubt thanks to any stage mishaps he's experienced throughout his career. He wasn't harmed, which is why we can laugh about it now.

It's not even the main event yet — could it be that the host is already a little tipsy? Well with all the alcohol lying around I wouldn't be surprised if he were. His accent is already pretty hard to understand, so there's no way to tell if he's slurring or not. He's still vaguely understandable which is pretty much the norm. Mr. 305 hasn't shown any other signs of drunkness so this could just be a mishap. It is Miami on New Year's Eve, so that behavior is pretty excusable if you ask me. But I'm keeping my eyes peeled for any more signs of drunkenness from the host — because, let's face it, it would make this whole show much more exciting. Dale!