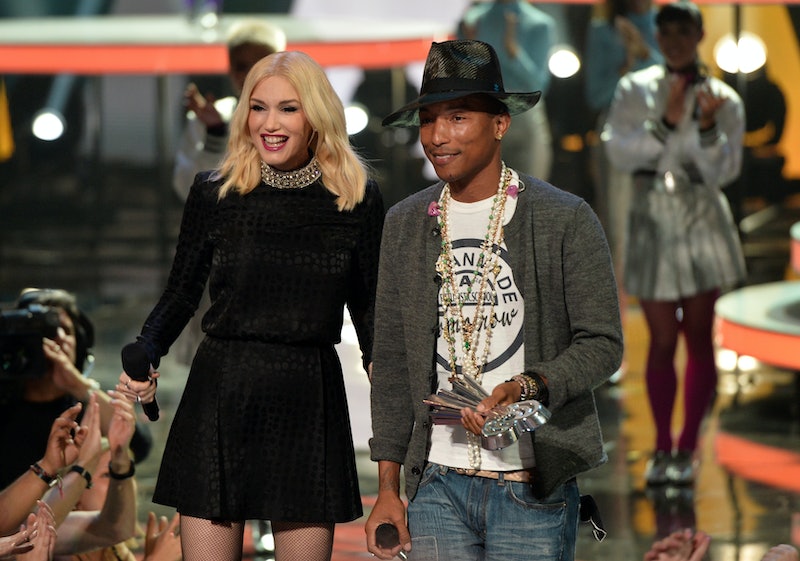 If you were anything like me in middle school and high school you were really obsessed with Gwen Stefani. While my music taste has changed since then I still have a soft spot for Stefani. How can I not? Her music is dope. Her style is eye catching. She's just a really cool chick. So, I've been pretty psyched that she's been releasing new music produced by and featuring Pharrell. For New Year's Eve with Carson Daly, Gwen Stefani and Pharrell performed "Spark the Fire". And they totally killed it.

Are you surprised? I'm not. These two have proven that they have great musical chemistry since the 2005 hit "Hollaback Girl". Gwen Stefani's third studio album will be released in 2015. Apparently, we have Pharrell to thank for convincing Stefani to make some new music.

In an interview with Pop Sugar, the singer/designer/fashion goddess Gwen Stefani says, "I didn't know I was going to be doing another record." That was until Pharrell offered her the song "Spark the Fire", which they performed together for New Year's Eve with Carson Daly. Pharrell, if you're reading this (I know you're not but let's pretend), thank you. I didn't realize how much I needed a new Gwen Stefani record in my life until hearing "Spark the Fire".

Their performance on New Year's Eve with Carson Daly brought out the fierce, fun energy of the song and I couldn't get enough. But this wasn't the first time the charismatic duo performed the song. On The Voice Gwen Stefani and Pharrell performed "Spark the Fire" in early December.

We got a lot of these two in 2014, thanks to their hit songs and their roles as fan favorite judges on The Voice. I honestly can't wait to see more of them in 2015. Let's just hope that means more ear candy collaborations. What did you think of Gwen Stefani and Pharrell's performance for New Year's Eve?