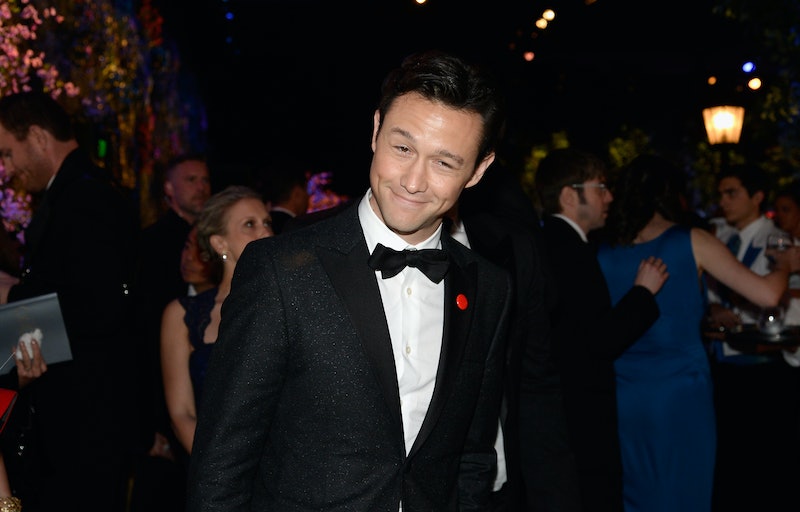 Proving 2015 will be the worst year yet, today it was announced Joseph Gordon-Levitt secretly wed girlfriend Tasha McCauley in a quiet ceremony December 20th. McCauley, for the uninformed, is the brilliant, raven-haired CEO of Fellow Robots. In related news, the funeral for my hopes and dreams will be held at 9 pm tonight. In lieu of flowers, please send alcohol.

Whether you favor the muscles-upon-muscles of Channing Tatum, the "Hey, girl" gaze of Ryan Gosling, and whatever it is about Benedict Cumberbatch that causes ladyboners, everyone has a celebrity crush. And after watching 500 Days of Summer, in which he played a sweater-vest-wearing, Smiths-loving, hipster-lite Tom Hansen, Gordon-Levitt became mine. What can I say, the man's a catch, and any number of qualities drew me to him.

It could be that combination of affable charm and intellect, or his impressive entrepreneurial spirit that keeps him juggling acting, directing and producing. Perhaps it was his work with HitRecord, that he was at the helm of such a benign, collaborative creative project. Or maybe it's just because he looks like a healthy version of my high school boyfriend. All of these theories are valid, but the point is, he was a beacon of hope and comfort whenever I would lose faith in the opposite sex.

AND THEN THIS HAPPENED. Here I thought this year would be free from heartache.

Let's face it, the delivery was been so abrupt and cruel, there was no engagement announcement, no time to grieve, no emotional preparation. Hell, the wedding is already almost two weeks old, so there was zero chance for me to go and Benjamin Braddock that entire situation. For hours I've flailed desperately, a tear-stained mess in a sherbet-colored slip.

But after everything was said and done, I think I'm okay. If copious re-watches of 500 Days of Summer have taught me anything, it's not to mourn those who we tend to romanticize. And for those of you also stuck in the Joseph Gordon-Levitt crush camp, allow me to explain.

Throughout the film, Gordon-Levitt's character claims to be in love with the titular Summer (my girl Zooey Deschanel), but what he really loves is the idea of Summer. He focuses on her bright blue eyes, her heart-shaped birthmark and their shared love of indie music, but he at no point really listens to her, and doesn't truly know her. He still, however, takes it hard when she ends up spontaneously married to someone else. This happens in real life all the time, but it's certainly more applicable to our fantasy boyfriends.

When we fall for a celebrity, usually what we're truly falling for is an ideal. Perhaps that ideal is solely attraction-based, or maybe it digs a bit deeper. But the truth is, to me Gordon-Levitt is just a combination of the qualities I want in a man (dark-haired, skinny, creative, etc) and despite what the heart-shaped picture on my drawer would insinuate, I don't really know him. His wife (sob) does.

Simultaneously, celebrity crushes are specifically comforting because deep down you know it's not going to work out. That's part of the entire allure. So while having that celebrity ideal can be a healthy, fun thing, it shouldn't bar you from exploring the real love that's out in the world.

I mean, I plan to go Full Morrissey and abstain from anything romantic for a long while, but that's my choice.

Truth be told, I don't completely think my crush on Gordon-Levitt has been murdered-by-marriage. It will, more likely, be reserved to a more muted reverence of his entire being. It didn't make writing this any easier, but I managed to abandon my original draft of this announcement, which was straight-up gifs of ugly crying. In any case, I'm glad that I have the lessons of 500 Days of Summer to lean on, proving that the fragile ego of a 23-year-old writer can be mended by logic. And pop culture.

So all this said, congratulations are in order for the couple. I'm glad that you've found that intangible thing that's so rare in this world: real love.