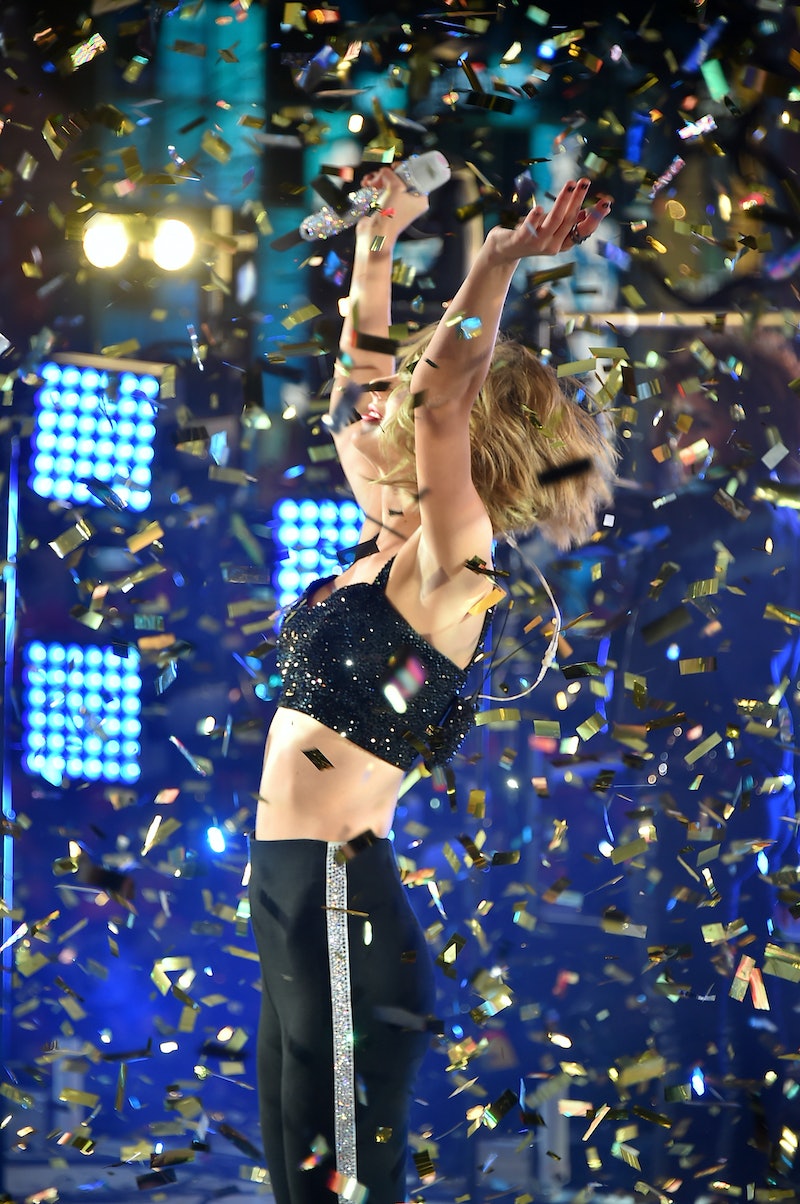 There is immense pressure to make New Year's Eve a magical night and since Us Weekly likes to tell us that stars are just like us, famous people must feel the burden of making the night special too. So how did celebrities celebrate New Year's Eve? Of course, some stars were busy performing for our amusement on TV (dance for me, puppets, dance!), but others relaxed at home, went to parties, or watched fireworks. Seriously — celebrities are just like us!

Now, New Year's Eve is technically just another night in the calendar year, but since it's the last night of the year, something must be done to mark the momentous occasion. New Year's Eve is supposed to be a night you'll never forget — which is pretty hard to do when drinking copious amounts of alcohol for us party animals. Luckily, the world of social media allows people — famous or not — to document ringing in the New Year. And for those people who preferred to celebrate the ending of 2014 cozied up at home — well, they could use Twitter and Instagram to advertise that as well.

Whether they are movie stars, musicians, talk show hosts, or on TV, here is how some celebrities spent their New Year's Eves.

Oh, the mysterious world of James Franco. Somehow he partied with Robert Duvall and James Caan.

Britney Spears swapped champagne for hot chocolate to celebrate the start of 2015. (I would have spiked the hot chocolate — just sayin'.)

Ellen DeGeneres got her Ambien on for 2015.

Taking a page out of DeGeneres's book, the Wests kept it low-key.

After giving birth to son Reign on Dec. 14., Kim's sister Kourtney rocked her pajamas for the New Year, but showed off a fabulous sequin dress in a throwback photo.

Even though the above photo shows nothing of the sort, Mariah Carey cooked for her family and friends (sans Nick Cannon).

The late-night show host was apparently working on getting buzzed.

Vergara rung in the New Year with her new fiancé Joe Manganiello ... and Arnold Schwarzenegger??

In another international New Year's Eve celebration, Selena Gomez rolled around in the sands of Dubai with Gigi Hadid.

Uh, based on Chris Pratt's tweet, I wish I had spent New Year's Eve with him and his wife Anna Faris.

The #YearofTaylor ended with her performing during Dick Clark's New Year's Rockin' Eve with Ryan Seacrest. And honestly, that's pretty much the most perfect way to have ended 2014.

More like this
Halsey Calls Out Label For Asking Them To "Fake A TikTok Moment" For New Song
By Jake Viswanath
Taylor Swift, Kerry Washington & More Speak Out On Uvalde Mass Shooting
By Jake Viswanath
Kylie Jenner Roasts Kendall For Her Cucumber Cutting Skills On TikTok
By Jake Viswanath
These Adorable Kourtney & Travis Moments Led Them To The Altar In Italy
By Bustle Editors
Get Even More From Bustle — Sign Up For The Newsletter