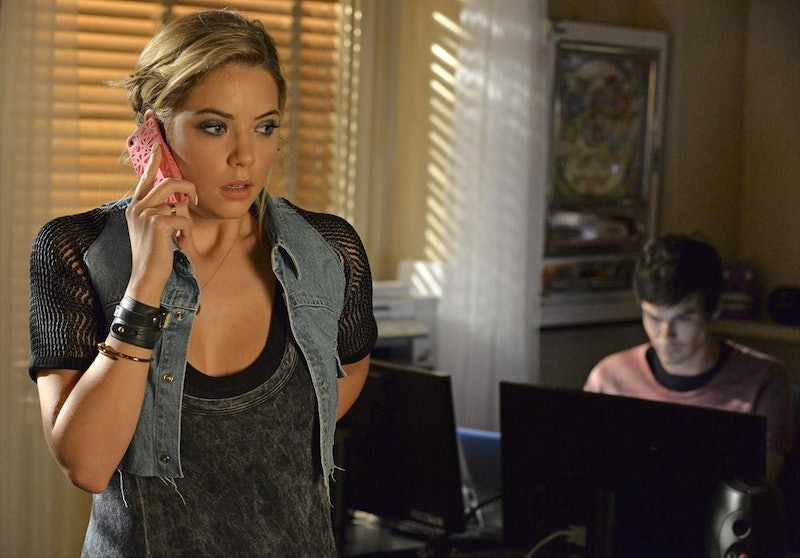 It's (almost) baaaaack. ABC Family's addictive mystery-drama Pretty Little Liars premieres with Season 5B Tuesday, Jan. 6 and with it comes a whole new puzzle, but first we should probably recap what happened in Pretty Little Liars Season 5a. When we last left the little liars, they were tracking down a piece of evidence that would connect Bethany — aka the real dead girl in Alison's "grave" — with the not-so-dead Queen Bee in order to prove that Spencer didn't whack Bethany with a shovel on that fateful night. The girls truly believe that Ali is 'A,' and they'll stop at nothing until she is put behind bars for the murder of Mona and the countless other crimes they believe she's committed over the years. But while it's unclear whether their assumptions about Ali are correct, one thing is: the upcoming Season 5B of Pretty Little Liars will change everything for the liars. The liars are fighting back against the very person who brought them together, and their fight may finally uncover the secrets that have been buried for years.

So how did Aria, Emily, Spencer and Hanna get here? Season 5A was has been one hell of a ride. Here's what happened in Season 5A that changed absolutely everything and set us up for an explosive second half of the season:

We've seen Ali throughout all four previous seasons of Pretty Little Liars, whether it be in the form of flashbacks, "ghostly visions" or dreams. But as the girls discovered in Season 4, Ali has been alive this entire time — according to Ali, she faked her death and went on the run to escape the elusive 'A,' who was trailing her years before going after the other girls. That's not what Ali told the cops — instead of confessing that she had faked her own death, Ali told the police that she was kidnapped on the night of Bethany's murder, and was able to escape with the help of her friends. Unfortunately, Ali's lie was just another thing that 'A' threatened to hold over all of the liars' heads — if Ali isn't 'A' herself.

Remember Ali's friend Shana? The one who was supposed to get close to Jenna in order to protect Ali? Well, it didn't really work out like that. In the Season 5 opener, Shana revealed that she planned on killing Ali for the way she mistreated Jenna, whom Shana had fallen in love with. Aria pushed Shana to save her friends, and the fall ended up killing her. Unfortunately for Aria, 'A' has a way of seeing everything — like, say, the accidental death of Shana. Oops.

A goes on a bit of a hiatus after Ali returns to Rosewood — but comes back with a vengeance. The girls' elusive stalker sticks a bomb in Toby's house that explodes the moment the body in Ali's grave is revealed to be Bethany's. It's not the only proof that 'A' is kicking things up a notch: Ali is nearly strangled to death in her own home by a mysterious masked figure, assumed to be Big 'A' when Ali receives a text from the stalker threatening to kill her if she leaves Rosewood.

Melissa is pretty much the shadiest, but her recent reveal proved that she might have had better intentions than anyone ever thought. It turns out that Melissa was the one who buried the girl in Ali's grave alive — meaning that it was actually Melissa who killed Bethany. Melissa saw Spencer follow Ali with a shovel across the yard and then found the body of Bethany, whom Melissa incorrectly assumed was Ali. She quickly buried Bethany and kept Spencer's "secret," thinking that she was protecting her sister. After recording her confession on video for Spencer, Melissa fled the country at the behest of her father.

Alison Has a Secret Agenda

Ali proved that she was still the best liar on the block when it was revealed that she paid a man named Cyrus to confess to her kidnapping in order to keep the police from looking outside of Ali's story for the truth. But Ali's doing more than just protecting herself — the liars discovered that Ali actually knew Bethany before her murder. It turns out that Bethany's father was having an affair with Ali's mom and that the girls had made plans to hang out the day of Ali's "murder."

Perhaps the most surprising — and heartbreaking — death in Pretty Little Liars history was the death of the original A, Mona. The (mostly) reformed Mona was on the liars' side in the 5A finale, "Taking This One To The Grave," when she helped uncover the startling connection between Ali and Bethany. Mona's information could have put Ali away forever — which is exactly why Ali was the first suspect to come to mind after Mona's brutal murder. Mona was attacked in her own home by a blonde in a hood, making it appear like Ali had finished off her greatest enemy for good. But could it really be Ali, or just another blonde with a sinister agenda?

That's exactly what the girls will uncover in Season 5B — and the premiere can't come soon enough.