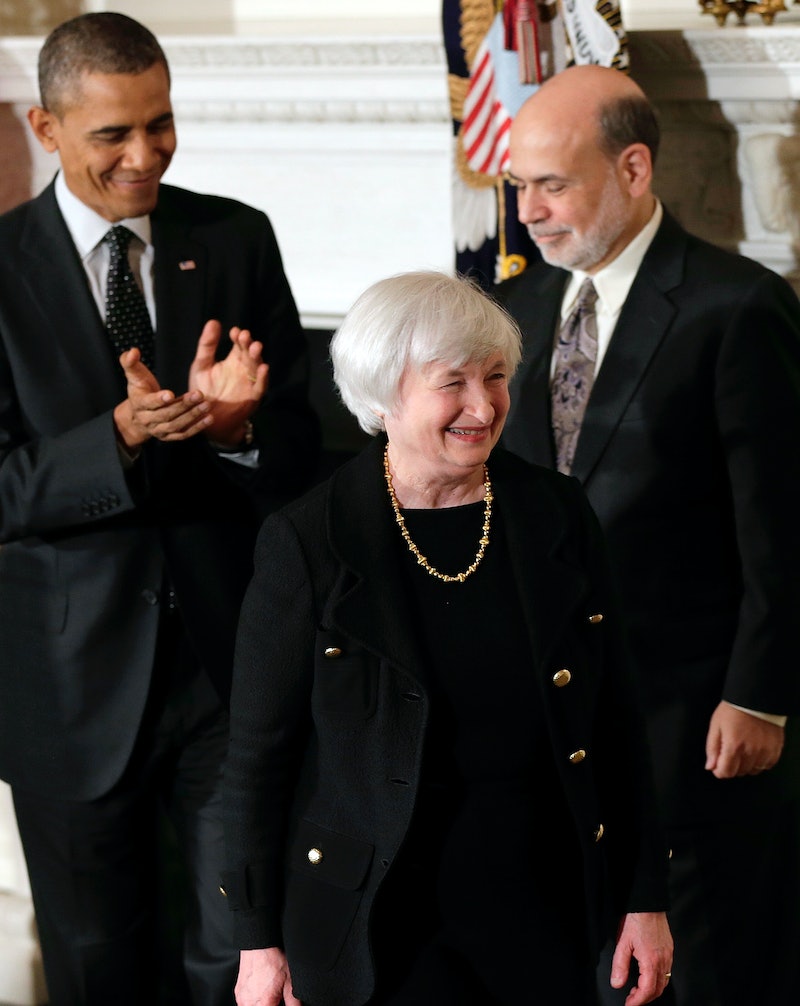 Thought you were done with all the roundups for 2014? Think again, because we're still squabbling over at least one of them. The Economist says there were no influential female economists in 2014, even after revising and re-releasing a second version of its "Influential Economists" list in the wake of criticisms, and we remain suspicious.

Hoping to figure out the most influential economists of 2014 at least somewhat quantitatively, The Economist provided the names of almost 500 top economists (mostly according to activity on Research Papers in Economics, a popular "decentralized bibliographic database" in the field), to a consulting firm. The consultants, Appinions, went about "capturing instances when [the economists' names] were mentioned and weighting each mention to reflect where it appeared and how many times it was mentioned," for a period between mid-September and mid-December, 2014. Thus the first version of the "Influential Economists" list was born... and it contained no women.

But it didn't go over so well. Ben Casselman of FiveThirtyEight, for instance, was quick to criticize the list's methodology on a number of grounds, including not only its exclusion of women but also its deep inability to distinguish internet noise about the economists from signal regarding their genuine influence. For instance, one economist made it onto the list in part because he shared a name with a conspiracy theorist with an online presence; another inappropriately made it onto the list apparently for having made highly-publicized, inflammatory quote to the media.

So The Economist revised its list, but not that much – still no women. To be fair, once The Economist had released the first one, it was probably a lose-lose-lose: not changing the list at all would have made the publication look impervious to criticism, changing it to include women would have looked like an affirmative action measure, and changing it but continuing not to include women looks like standing by their sexism. But even economist Justin Wolfers, who made it onto both versions of The Economist's list and whose better half is coincidentally herself a successful economist, finds its continued lack of women curious.

The Economist's decision to exclude central-bank governors ("because their pronouncements are also the official views of the institutions they represent"), was a substantive one with non-neutral implications, like excluding Janet Yellen, chairwoman of the Federal Reserve. This absence certainly wasn't lost on feminists including Amanda Marcotte of Slate, but there's no reason to think the paper did it on purpose specifically to exclude Yellen from the list. Women are so under-represented at central banks in the first place that this single factor alone can't be responsible for the general gender skew of the list, and that is certainly not The Economist's fault. (Conservative economists are also missing from the list, by the way, but I'm not noticing any diversity-related outrage there?)

Anyways, I guess the internet talked about some men this year, which is hardly a big surprise. The Economist should work on its methodology, but as a newspaper reporting opinion and following trends it didn't create, I find it difficult to feel too upset over its admittedly somewhat arbitrary list.

Economics as a field might have a sexism problem but plenty of individual women in economics are doing great work, and you should pay attention to them. For starters, try following Claudia Sahm of the Federal Reserve Board, Betsey Stevenson of President Obama's Council of Economic Advisers, Ann Pettifor of the Prime group, and Stephany Griffith-Jones of Columbia University.

More like this
5 Crystals To Manifest More Money
By Megan McCarty
What Is Barack Obama’s Net Worth? He Makes *Way* More Now As An Ex-President
By Hugh McIntyre
How To Make Workplaces More Welcoming For Men In 11 Easy Steps
By Ginny Hogan
Your Home Could Seem So Much More Expensive If You Tried Any Of These Cheap Tricks
By Dena Ogden and Sara Brown-Rigoli
Get Even More From Bustle — Sign Up For The Newsletter