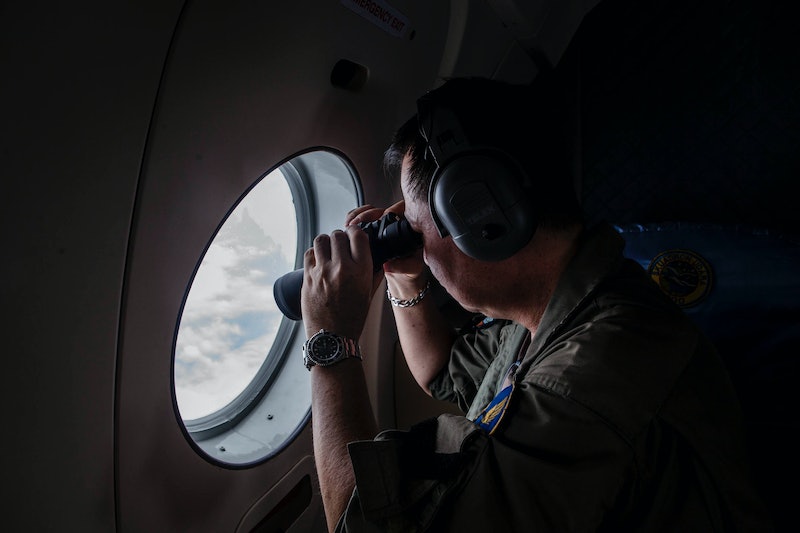 Indonesian officials announced a major break in the search and recovery of an AirAsia plane that went down in the Java Sea nearly a week ago. According to Bambang Soelistyo, head of Indonesia's search and rescue agency, four large pieces of AirAsia Flight QZ8501 were spotted in the water. The pieces are believed to be lying on the seabed, and search authorities will begin lowering cameras to the ocean floor once severe weather leaves the area.

"We've found four big parts from the plane we're looking for," Soelistyo told reporters on Saturday. These "big parts" presumably include the plane's fuselage, which authorities have been looking for over the last several days. In a Facebook post, AirAsia confirmed only that "two large objects" have been detected "on the ocean floor" with the help of sonar equipment.

According to Reuters, one of the large pieces was found by a search and rescue ship during the night. The other three objects were reportedly tracked down during the day on Saturday. Soelistyo told the media that the largest object was 18 meters long, or 59 feet.

Flight QZ8501 vanished over the Java Sea on Sunday morning, only about 40 minutes after taking off from Surabaya, the second-largest city in Indonesia. Carrying 162 passengers and crew, the plane was scheduled to arrive in Singapore just two hours after its departure. The route took the plane over water, with little land mass in sight. AirAsia confirmed on Saturday that 30 bodies of the victims have been recovered. No survivors have been found.

The discovery of large pieces of the AirAsia jet comes as the embattled airline suspends its route between Surabaya and Singapore. A spokesperson for Indonesia's Transport Ministry said on Friday the route "is temporarily frozen until after there is a result of evaluation and investigation," according to The Malaysian Insider.

Bloomberg News reports that Indonesia AirAsia wasn't licensed to fly between Surabaya and Singapore on Sundays — the day Flight QZ8501 crashed. The airline was reportedly permitted to fly that route four days a week, including Saturdays, according to Indonesia's transport ministry. Shukor Yusof, founder of aviation research firm Endau Analytics, told Bloomberg News that "the onus falls not only on the airline but also on the regulator" if it turns out AirAsia wasn't authorized to fly that day.However, the Civil Aviation Authority of Singapore released a joint statement with the Changi Airport Group on Saturday to clarify the service agreement between Singapore and Indonesia. The Singapore aviation authority said an airline needs to have its proposed flight path and schedule cleared by aviation regulators in both countries. The aviation authority added that Indonesia AirAsia was indeed operating on Sundays, contrary to what the Indonesian transport ministry claimed it approved:

On the Singapore end, Indonesia AirAsia had applied to operate a daily flight between Surabaya and Singapore for the Northern Winter Season from 26 October 2014 to 28 March 2015, arriving at Changi Airport at 8.30am and departing for Surabaya at 2.10pm.1 These daily flights were approved as there were available air traffic rights under the bilateral ASA and the slots at Changi Airport were available.

Indonesia AirAsia was operating the flight four times a week on Mondays, Wednesdays, Fridays and Sundays. Airlines may adjust their flight frequencies in the course of a season in response to market demand or operational requirements.

Investigators are still piecing together the cause of the plane crash, but authorities believe severe weather may have been a leading factor. According to the Associated Press, a 14-page report from Indonesia’s Meteorology, Climatology and Geophysics Agency concluded Flight QZ8501 was "trapped in in bad weather that would have been difficult to avoid."