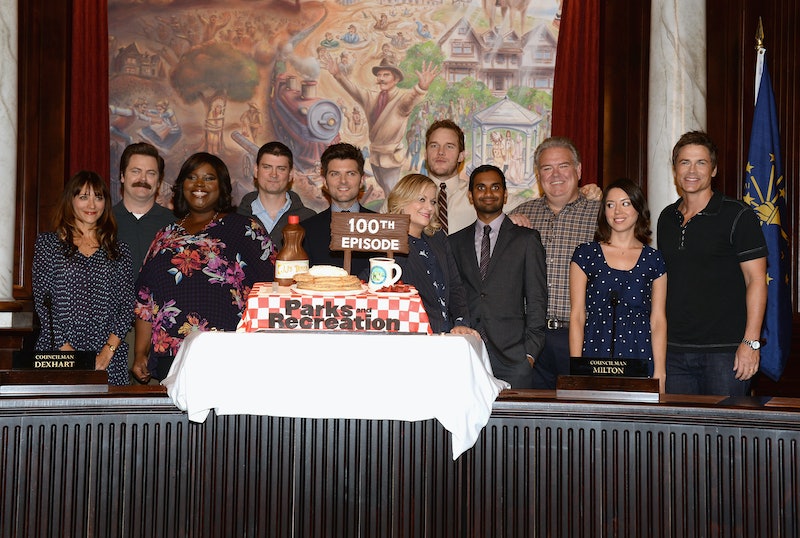 As a Parks and Recreation superfan who's seen every single episode of the show multiple times to the point where I could probably recite whole scripts if I really wanted to (I DON'T HAVE A PROBLEM, MOM), I haven't fully processed the fact that this beautiful little show is ending. Sure, it managed to stay on the air for more seasons than most shows do, and with struggling ratings at that — but it's still unbelievable to me that a show which is constantly a source of so much happiness is about to be the source of so much pain. Though we do still have one more season to look forward to, which is set to start on Jan. 13 on NBC (though it's only going to consist of 13 hour-long episodes, instead of the standard 22 half-hour episodes), the end of this show is a hard thing to accept — and, I'm sorry to say, this is going to make it even more difficult. The cast of Parks and Recreation appeared on the cover of Entertainment Weekly to promote season 7 of the show, and, as the great Chris Traeger would say, it's literally perfect.

Which is to say, Jerry ruined the whole thing. DAMNIT JERRY.

True to the show and its characters, the cast — including Amy Poehler, Adam Scott, Aubrey Plaza, Chris Pratt, Retta, Nick Offerman, Aziz Ansari, and Jim O'Heir — appears in the image — however, O'Heir's face is entirely blocked by Entertainment Weekly's title text, in perfect Jerry fashion. because, let's be real, if Jerry/Larry/Garry/Terry were to appear in some sort of promotional image for the Pawnee parks department with the rest of the gang, he'd somehow ruin it.

Here's the image, via Parks and Recreation's Facebook page:

Damnit Jerry indeed. Man, I am really going to miss this show.