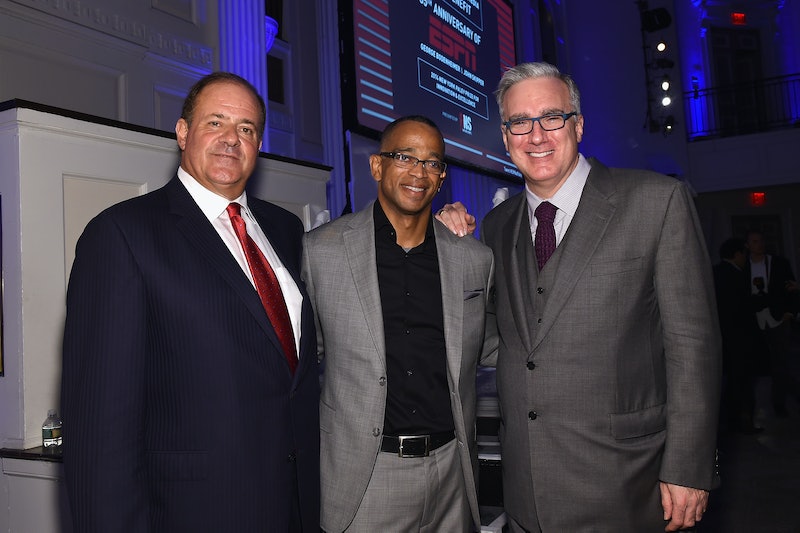 On Sunday morning, veteran ESPN anchor Stuart Scott died after a long battle with cancer. He was 49 years old. The sportscaster has been part of the ESPN family for 21 years, and over the course of his career, became one of the most recognizable and influential individuals in the industry, making phrases like his trademark "Boo-ya" and "As cool as the other side of the pillow" common household remarks. In a statement, ESPN president John Skipper said, "ESPN and everyone in the sports world have lost a true friend and a uniquely inspirational figure in Stuart Scott."

Since joining ESPN in 1993, Scott quickly moved up the ranks on the sports channel, anchoring the network's signature 11 pm edition of SportsCenter, and becoming the very face of late night sportscasting. His talent and dedication soon landed him a bevy of coverage opportunities with the NFL and NBA, and has covered effectively every single major sporting event, including the NBA Finals, Super Bowl, Major League Baseball playoffs and World Series, and the NCAA Final Four. Scott redefined sports coverage, especially as an African American anchor in the early '90s, and as ESPN director of news Vince Doria said, "There were successful African-American sportscasters at the time, but Stuart spoke a much different language... that appealed to a young demographic, particularly a young African-American demographic."

Not only was his presence inside the studio and as a host positively magnetic, his ability to take a few hits and make fun of himself also endeared him to audiences across the country. There was the time he was hit in the eye while attempting to catch a pass at a New York Jets mini-camp, which ended up requiring surgery that put him out of commission for a few months. And there were also his duets with co-host Rich Eisen on the 1 am edition of SportsCenter. Eisen, who now anchors the NFL Network, told ESPN,

Who would have thought the perfect guy for me, a Jewish kid from Staten Island, would be an African-American guy with North Carolina roots? Sometimes neither one of us knew who the other was talking about, but it worked. It was always a trip doing a 'SportsCenter' with Stuart.

But most important of all, perhaps, was Scott's tangible survivor spirit, the one that allowed him to carry on even after an emergency appendectomy during his November 26, 2007 coverage of a "Monday Night Football" game between the Steelers and the Dolphins first revealed a cancerous mass that would require further surgery. His lengthy battle with cancer has played out in the public eye for the last eight years, and Scott has remained a beacon of hope and inspiration for survivors everywhere.

As of March 2014, Scott had undergone 58 infusions of chemotherapy, none of which had fully eradicated the cancer that first struck in 2007. And even as the disease progressed, Scott never allowed it to interrupt his career or his life. Speaking with the New York Times, Scott said,

I never ask what stage I’m in. I haven’t wanted to know. It won’t change anything to me. All I know is that it would cause more worry and a higher degree of freakout. Stage 1, 2 or 8, it doesn’t matter. I’m trying to fight it the best I can.

Scott expressed these sentiments in his phenomenal ESPYs award speech just six months before he died, speaking words of wisdom that have echoed throughout a multiplicity of communities. Said Scott,

When you die it does not mean that you lose to cancer. You beat cancer by how you live, why you live, and in the manner in which you live … Fight like hell. And when you get too tired to fight, then lay down and rest and let somebody else fight for you … I can’t do this ‘Don’t Give Up’ thing all by myself.

Key to his fight were his daughters Taelor, 19, and Sydni, 14, who Scott described as his two crowning achievements. During his ESPYs speech, the anchor said, "The best thing I have ever done, the best thing I will ever do, is be a dad to Taelor and Sydni. Taelor and Sydni, I love you guys more than I will ever be able to express. You two are my heartbeat. I am standing here on this stage tonight because of you."