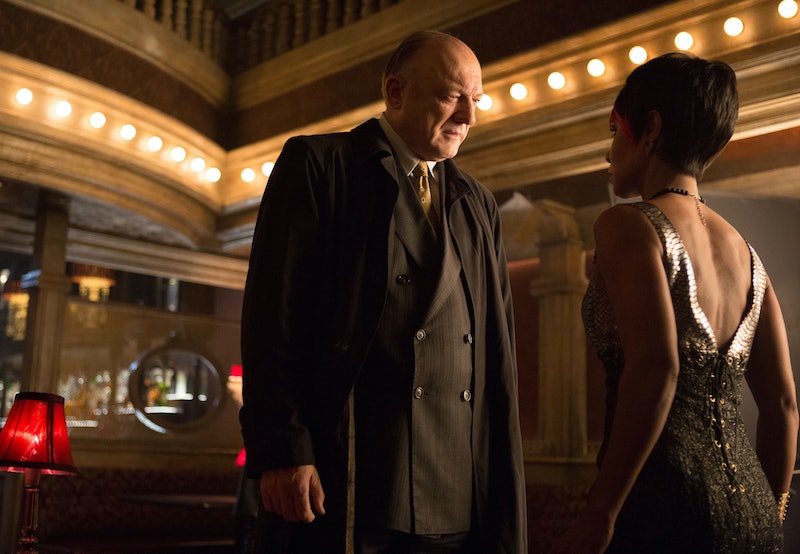 Prepare to be re-introduced to Gotham. We've been waiting weeks to find out whether Fish Mooney will be able to rally her traitorous troops and overthrow old man Don Falcone. In "Rogues Gallery," we'll meet a new henchman named Ganza. Played by Anthony Grasso, Ecplise reports that Ganza will be Gotham 's newest addition to Falcone's workforce, who serves as an obstacle for Fish. It seems like in every episode, at least one of the boss' goons gets carted off to the penitentiary. So both Falcone and Fish's staffs are dwindling, and they have less and less people to choose as associates in their ongoing, furtive battle.

Ganza, like Butch Gilzean and the others, will likely have to weigh the risks of betraying Falcone to act as a double agent for Fish — or maybe even Penguin — against the risk of being ratted out to the cops or worse, killed and left to swim with the other type of fish. And we still don't know what happened to Liza, the mole, other than that she's being manipulated by Fish, Falcone, and now Oswald Cobblepot. So the fate of a rookie like Ganza is hard to guess. But in hopes of forming a better impression, I'll try to gather everything I can find about what role Ganza might play in Fish's ongoing plans.

The Name Has an Inscrutable Meaning

Ganza is an Italian surname that can mean a type of wild goose. Clue hinting that he'll be going on a wild goose chase, or simply a random choice by a beleaguered TV writer at two in the morning?

The Actor Has a Pretty Unusual Side Gig

Grasso, interestingly enough, happens to be a professional photographer who specializes in head hots. I sincerely doubt that will come up in the episode, but it's kind of interesting. Gotham picks from a lot of different places for its actors — there are movie stars and total unknowns, cop show veterans, child actors, former hostages from Smash, a new guest star who brings a little Wire prestige, and even their supporting players have a little interest to them.

He Must Meet Up with Fish Mooney

Grasso posted a picture from behind the scenes on Twitter, alongside Jada Pinkett Smith from the set of "Rouge's Gallery" around Halloween. So they must be shooting together, which means he's almost definitely on the Falcone side of things… unless he's a double agent. We know from the clips released in advance of the episode that Maroni is very displeased with Penguin throughout "Rouge's Gallery," which will surely be good news for Fish and a good omen for Ganza's survival. A happy Fish is a much less deadly Fish.