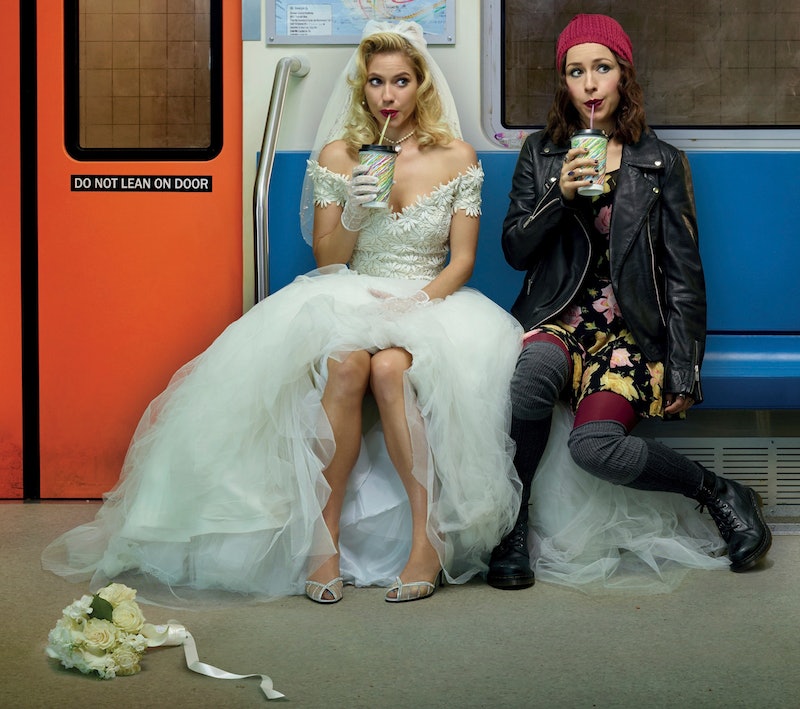 VH1 has been cornering the market on late 20th century nostalgia since they aired I Love The 80s (and I Love The 90s) back in the early 2000s. The network's new scripted show, premiering on Jan. 7, is embracing the 1990s, but will Hindsight be set entirely in 1995? The premise of the series is that Becca (Laura Ramsey), on the eve of her second wedding in present day, starts reflecting about her first wedding back in 1995. As she worries that she's making another mistake, fate intervenes and sends her back to the past.

After meeting a stranger on the streets of NYC who quotes a Buddhist proverb about not looking to the past or future, but at life as it is, she embarks on a wacky elevator ride where she passes out. Next thing Becca knows, she is being woken up to Ace of Base's "The Sign" on her alarm clock and then goes searching through her dad's kitchen for the Keurig to no avail. (Sorry, Becca. You'll have to go with the old fashioned coffeepot.) As she struggles to understand what happened, she uses a Discman and VHS tapes as clues to figure out she's no longer in 2015 and that she is supposed to be marrying her first husband Sean today. The date is Oct. 18, 1995.

In 1995, scrunchies abound and her best friend Lolly (who Becca lets in on the whole being from 2015 and getting to relive her life thing) casually flips by O.J. Simpson on TV (he was found not guilty on Oct. 3, 1995). Having the setting start in 2015 and then jump to 1995 is fodder for some obvious, yet amusing time-jump jokes. In 2015, Becca passed a marquee advertising Snoop Lion, Frank Ocean, and The Black Keys concerts. In 1995, the same marquee is for Snoop Doggy Dogg and Tha Dogg Pound and The Black Crowes. After Becca says that the only email address she had for Lolly in 2015 was AOL (with a very appropriate dismissive "pffft"), Lolly asks fearfully, "Do people not use AOL anymore?" No, Lolly. They don't. (RIP AIM.)

Other notable references to the future include Becca telling Lolly about her soon-to-be husband in 2015 by saying, "I was marrying Andy Kelly ... I know he was dorky, but he got cute. The same thing happens to Patrick Dempsey." (Lolly is aghast at such information.) Plus, there are nods to '80s movies with Sixteen Candles and Say Anything. (Lolly says, "Oh my god. Say Anything was such a good movie." Becca follows with, "I know it totally holds up." Debatable, Becca. Debatable.)

There is an amazing soundtrack in both time periods (The Cranberries?! Yes, please!) and odes to the sometimes-questionable fashion of the '90s (clogs get multiple shout-outs).

Currently, Hindsight will have 10 one-hour episodes, but if the rest of the episodes can hold up and grow from the pilot, I hope there will be more. And at the end of the pilot episode, Becca says:

OK. Don't ask me how I got here. But I am here. In the '90s. No idea how to get back. Not even sure I want to go back. I have my clogs, my favorite jacket, and my best friend. And I am going to look deeply at life as it is.

Based on that, it is safe to say that the majority of the show will take place in the '90s. Since it starts in October 1995, it won't be exclusively in 1995 (we'll probably get to 1996 pretty quickly), but I can't imagine how Becca could return to 2015 without the show ending. Of course, there will be flash-forwards (we have to discover what made Lolly and Becca stop being friends on New Year's Eve in 2003), but if you tune into Hindsight, get ready for some serious 1990s.

There will also need to be some sort of resolution to Becca's jaunt into the past, but since it's a TV show, the series — if successful — could live in the '90s (and perhaps even the 2000s) for seasons to come.