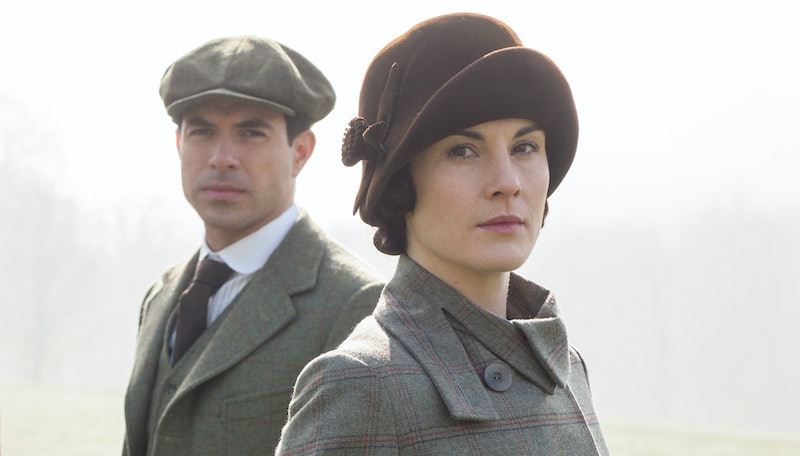 There was a time when Downton Abbey's largest indication that sex had ever taken place was the reveal of a pregnancy. Sure, pregnancy was scandalous at the time, but with the exception of a terrible, horrible incident involving Anna & Mr. Gillingham's vallet, things have been rather chaste, especially when it comes to the upstairs set (remember how no one was even willing to call Mary's tryst with the late Mr. Pamuk anything but a variation on the word "mistake"). But in the Season 5 premiere of Downton Abbey , Mary and Tony Gillingham make a sex pact, ensuring that the sex chatter will surely have to go beyond "And now Edith is pregnant and alone."

Now, I'm not some horn dog hoping to see some action in 2015, but even as a fan of classic literature (which is so chaste it hurts sometimes), it was starting to feel like Downton was approaching the topic of sex upstairs at the Abbey the way the stifling social rules commanded it. And considering the point of the show is to show us that beyond the prim and proper surface, the comings and going of servants and the people they serve wasn't all that different from our more honest age. They were still people and everyone wanted to get sweaty under the covers.

In the Season 5 premiere, Mary almost gets there: She tells Anna that part of the reason she can't say yes to Tony Gillingham is because she needs to test drive the car before she takes it off the lot, or as she puts it, something about testing passion when they're alone. It was nice to see Mary admit, even if it's just to Anna, that sex is a big deal and that she wants to enjoy it if she's going to agree to have it with someone for the rest of their lives. So far, Downton's only been about true love and snow falling on pine trees (and dear deceased Matthew making occasional comments about looking forward to *things*). For once, Mary, of all people, made relationship chatter about the two most basic components it requires: love & sex.

If it ended there, I suppose I would have been satisfied — I don't expect anything tawdrier than that (especially when we find the footman Jimmy/James squirrelling about under the covers — one does not hump at Downton Abbey after all — with one of Lady & Lord Grantham's guests this week). But then Gillingham stole away to Mary's room to speak his peace and he kicked the door wide open.

He doesn't care much for the rules about cavorting in one's girlfriend's (if they were even allowed to say that word at the time) room, and comes right in with his brilliant idea: they take a secret vacation to have sex with each other so that Mary can know for sure if she wants to spend the rest of their lives together. (He swears he's really good at it, so she'll be convinced right then and there.) She pretends to be demure because that's what Mary does, but it's obvious that she's thinking "Hell yeah" (or I suppose "Oh my! Yes, Mr Gillingham!"). Mary agrees in a matter of seconds, though, as no stranger to a sex scandal, she insists they keep it as quiet as possible.

And this means, of course, that sex is going to play a huge part in the coming episodes. No near-pornographic, HBO-level scenes are headed our way, but it does seem that this is the first time sex upstairs will be discussed frankly and somewhat openly. Doesn't it kind of feel like we can all let out a great sigh of relief now?

More like this
What Makes A Sally Rooney Sex Scene So Hot?
By Samantha Leach
Here’s How To Deal With Sexual Frustration If You Don’t Want Casual Sex
By Annakeara Stinson and Mackenzie Sylvester
Here’s How To Reignite The Spark In A Sexless Relationship
By Vanessa Marin
I'm 42 & I've Never Had Sex. Is It Too Late?
By Sophia Benoit
Get Even More From Bustle — Sign Up For The Newsletter