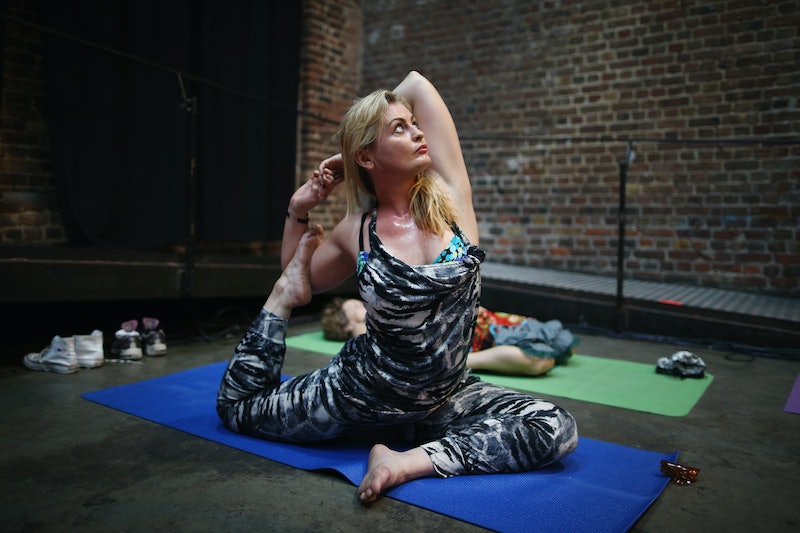 I was at a thrift store today, trying to get rid of a sizable chunk of my closet before I move out of my apartment. To my dismay, the place was packed. There was an actual line to drop your clothes off, and no one else was even shopping. "What gives?" I thought bitterly. And then I realized what it was: Everyone is getting rid of things they don't want in their lives, because it's the beginning of January and everyone is turning over that oft-turned proverbial new leaf. The old leaves were in white trash bags and paper bags, and were making it so my parking meter ran out of time while waiting to drop off my own old leaves.

This yearly renewing ritual isn't restricted only to our closets and donation centers—everyone is looking for different ways to make the new year feel like an opportunity to do all the things we ought to do in order to become the people we'd ideally like to be. Right now, the gyms are crowded with eager, goal-oriented humans. I bet restaurants have to order more veggie patties and kale during January than they do at any other time during the year. Your friends and family members are probably being nicer to you. That's because we're all trying to be better people. As nice and commendable as all of that is, we all know it most likely won't last.

As the story always goes, in a few weeks, we will start to give up on our New Year's resolutions. It won't happen in one day, rather, it happens slowly, like the way molasses pours out of a jar. You'll try to fight the good fight, and keep those resolutions up, but they probably won't stick. It's okay. We're humans, and we're creatures of dumb, destructive habits. Here are the eleven familiar stages you will go through when you finally start giving up on those resolutions.

1. Before you even think about abandoning your new goals, you revel in them

You buy a brand new notebook solely for New Year's resolution purposes. It's brand new and shiny, and it makes you feel brand new and shiny. You go to the farmer's market and buy kale. You order a juicer off Amazon, and you sign up for a gym membership. You make a list of all the people you need to say sorry to or treat better. You basically feel like the Goddess of New Year's.

2. But after three weeks have gone by, you start to feel disappointed

Your goals were supposed to have gotten you further than this by now. You're skin doesn't look markedly more radiant as a result of all the healthy eating choices you've been making, you don't even feel like anyone has noticed that you're a more considerate, kinder human, and you're just not feeling this new lifestyle anymore. You want your money back.

3. You take a few days off from your resolutions—just a little break. You'll be right back.

What's one burrito from Chipotle and a milkshake and an order of drunk fries from McDonald's and that bottle or wine and that naughty bag of Doritos? So what if you messaged your ex again on Facebook? You hadn't looked at her profile in two whole weeks, which is amazing for you! "I deserve this," you think at 3AM, right before you wake up feeling disgusted with yourself.

4. Since you skipped a few days, you might as well skip a week

Well, it's already clear that you possess a depressing lack of discipline, so whatever. It's been a long week at work, OK? No one is perfect.

5. You realize not exercising is way better than exercising...

It's so warm in bed, and it's so cold outside. Your gym shorts are dirty and you haven't had the time to wash them and the thought of wearing still-kind-of-damp-with-sweat shorts makes you feel sad. You could be watching Netflix and endlessly scrolling through Tumblr. You'll just do some push-ups before bed. Same diff'.

6. ...and that kale is basically bitter grass that is only palatable in smoothies

Okay, whoever decided kale was an acceptable substitute for lettuce in salads was smoking something awesome, because kale is not tasty no matter how much caesar dressing you smother it in. Eating healthy is just exhausting.

7. You realize that "being patient" (or whatever quality about yourself you wanted to improve upon) is overrated

Why are we even trying to change ourselves? Shouldn't our friends and lovers just LOVE us unconditionally? Shouldn't they accept us for who we really are? Why even play this game?

8. Then the guilt comes

All justifications and excuses aside, you don't feel awesome about yourself right now. You're slipping. 2015 was supposed to be The Year! Yet here you are, barely into the damn thing, and you've spent over fifty dollars on Chipotle, you gained back the weight you lost last week, and you're still participating in mildly self-destructive activities. This is not good.

9. So, you try out your resolutions again, but with admittedly less gusto this time.

It's just not as fun when they're End of January Resolutions, you know?

10. Deciding that resolutions are bad ideas in general

11. You throw in the towel. Enough, New Year's resolutions. You will not celebrate this terrible tradition any longer

Because burritos and self-acceptance are so much more fun than kale and the elliptical.