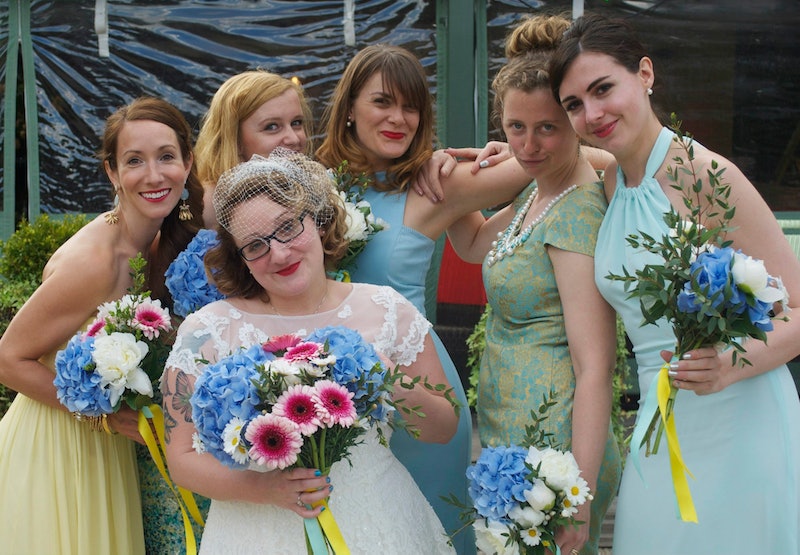 When Olivier and I sat down with our wedding officiator to discuss what would be said during the ceremony, I had a list of words that were to be completely avoided during his speech: There would be no mention of God, (because as far as I’m concerned, that guy is even less likely than Santa Claus), and no use of words like “obey,” “honor,” or any of that “until death do you part” malarkey. Another stipulation of mine? That when we were pronounced a married couple to our friends and family, that we be called “partners in life and love.” The words husband and wife were not on the docket. And for me, they never have been.

It was somewhere around the age of 13 (or whatever age every young female writer stumbles upon Sylvia Plath and realizes that she’s not alone) that the word “wife” took a sour turn for me. Plath’s depiction of marriage, as an institution that seemed like an asylum for the mediocre and simple-minded, was a trap that I wasn’t interested in falling into. Like Plath, “I wanted change and excitement and to shoot off in all directions myself,” which, as she says, isn’t something easily attainted when you fall into that “infinite security” that comes with being someone’s wife.

I resolved then that marriage would not be any sort of mission of mine, and that any baby I had would be born from a typewriter (far more romantic than a computer, don’t you think?). Each word on those hundreds of pages would be my true labor of love. That was the route I was taking.

For starters, it’s ugly — not just in what it means, but also in how it sounds. Say it out loud: Wife.

But, as I’ve written before, I slowly but surely changed my mind about marriage when I met Olivier — and, yes, I still feel a bit like a sellout for it. But while Oliver might have managed to make me change my mind about marriage, the word wife is definitely not going to be winning me over anytime soon.

So, why, might you ask, do I hate the word wife so much?

Well, for starters, it’s ugly — not just in what it means, but also in how it sounds. Say it out loud: Wife. It’s definitely no “cellar door,” and sort of makes your mouth feel like you haven’t completed the word. It hangs there, awkwardly, because the F just isn’t strong enough to seal the deal. More importantly, of course, there’s also the possessive nature of the way we use word: I am not just a wife; I am someone else's wife. I am Olivier’s wife. In this regard, I belong to him, and he owns me.

I am not Olivier’s property. I am his partner, his buddy, and the first person to laugh at him when he walks into a wall (which he actually does quite often).

Etymologically speaking, if we look back at Middle English and Old English, the spelling of wife is “wif,” which some scholars believe to be related to the German word “weib,” and just might have Indo-European roots in “ghwībh,” meaning "shame, also pudenda." So a wife is someone who should be ashamed? No thanks.

If we look at the word wife in a historical context, we also have to remember that it was popularized at a time in history when a husband had legal ownership over everything about his wife, right down to the sheets she slept in at night. He was also within his legal right to beat her, since she was his property. As God himself told Eve after the Fall, "Your urge shall be for your husband and he shall rule over you."

Many centuries ago, "wife" was synonymous with "woman." You can still find remnants of that in the construct of "midwife" or "fishwife"... The word didn't take on its meaning as "a married woman" until sometime between the third and twelfth centuries, give or take, and it took several centuries more to romanticize the job description to include keeper of heart, hearth and home.

I also take issue with the phrase "husband and wife." The word husband customarily and traditionally always comes first, which falls in line with the Japanese word for wife, Oku-san, which translates to "person in the back."

I will not stand at my partner's back. I will stand at his side.

I am not Olivier’s property. I am his partner, his buddy, and the first person to laugh at him when he walks into a wall (which he actually does quite often). This isn’t to suggest that a woman’s preference for the word “wife” is anti-feminist in any way. Feminism is about the right to choose, and I’d be completely wrong to dictate to other women what they should and should not prefer.

In fact, I do admit that when I write about Olivier and my marriage, I occasionally use the words “wife” and “husband” (as much as it pains me). Since my grandmother and everyone else seems to think I’m talking about a business colleague whenever I refer to Olivier as my partner, I sometimes try to make it as easy as possible for people to distinguish between the two.

But in the end, I prefer to simply introduce Oliver by his name in social situations — and ask that he do the same for me. It's his name after all, and if someone has any inquiries as to who this Olivier person is, I think it becomes more than clear within a matter of minutes. I'm pretty hooked on the guy, and it's obvious we're together.

We don't need a word to lock it down — and we never have.

More like this
I Feel More Like Me With My Meds, Not Without
By Anonymous, as told to Anna Goldfarb
The Most Compatible Life Path Numbers, According To Numerologists
By Kristine Fellizar
The 3 Most Compatible Matches For Life Path 1s
By Kristine Fellizar
9 Alternatives To The 3-Day Texting Rule In Dating
By Ginny Hogan
Get Even More From Bustle — Sign Up For The Newsletter